The disappearance of Chandra Levy dominated the 24-hour news cycle through the summer of 2001. But after September 11, the story lost its momentum. The Geocities entry on Levy recalls that her remains turned up on May 22, 2002 in the District of Columbia, discovered by a turtle spotter after the "massive" police and FBI search turned up nothing ...

They found her remains deep in the woods, next to
a tree. Her leggings had been knotted at the ends,
leading to speculation that she had been tied up
with them, possibly to the tree. The rest of her
faded clothes, including Reebok sneakers, and a
USC sweatshirt were nearby. Her walkman was
found sitting neatly on a rock, with the headphones
still attached. Her hyoid bone, located in the neck,
had been damaged, which indicated she was
probably strangled.1

Independent New York reporter Robert Ledererman found the discovery of her body an "amazing coincidence" ... her corpse turned up "just in time to distract the entire US media from questions about what the Bush administration knew before 9/11."2

But during the '01 "exhaustive manhunt" period, as the Washington Post reported on March 25, Bush was "quietly building the most conservative administration in modern times." Terry J. Allen at Fairness and Accuracy in Reporting complained in early September 2001 that the press was "excavating every corner of her and Rep. Gary Condit's past to unearth a prurient bounty of personal detail. The level of investigative vigor might have exposed far more vital information had it been applied to Bush's appointment of numerous Iran-contra veterans to key posts."

There were a few exceptions in the media, but by and large, "news stories about Elliot Abrams, John Negroponte and Otto Reich have largely relied on past reporting ... by the usual supporters and critics, rather than in-depth investigations into their complicity in one of the bloodiest scandals of the past 20 years. And their guilt is based not on speculation or gossip, but on hard evidence that they aided torturers and death squads, circumvented Congress and the Constitution, and deceived the American people. "3

A key co-conspirator in the Iran-contra mess, and 9/11 as well, was the Frank Carlucci - Rumsfeld's college classmate, a key suspect in the murder of Patrice Lumumba, director of General Dynamics, Westinghouse, Ashland Oil, Carlyle Group, and so on - co-author of a RAND Corporation study prepared shortly after the "election" of GW Bush. The "Transition 2001" plans were drawn up by a panel of 60 "leaders in the areas of foreign and defense policy ... suggesting priorities, and recommending specific courses of action that the new president could take in the early days of his administration." That is, they gave Bush his marching orders. Some of the Transition 2001 team wound up in DC with key appointments. "Such decisive early action will be critical for setting U.S. foreign and national security policy on the right path for the balance of his term and beyond."4

Some of the "conservative" luminaries on Frank Carlucci's Transition 2001 team:

• Dave McCurdy - A member of the the CIA's In-Q-Tel advisory board, also "Distinguished Congressional Fellow" at CSIS.

• Marin J. Strmecki - Trustee chairman and president of the Smith Richardson Foundation, a base of operations for Zbigniew Brzezinski, PNAC's Midge Decter, Irving Kristol and Norman Podhoretz, also Edwin Feulner, Fred Ikle and Ben Wattenberg. From the SRF web site: "The Smith Richardson Foundation—together with the Olin and Scaife foundations [CIA fronts] —was a key supporter of the American Enterprise Institute when AEI emerged as a central player during Ronald Reagan’s first term as president ..." 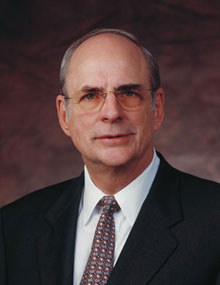 • Elizabeth Frawley Bagley - Foreign policy advisor to the drafting committee for the 1992 Democratic Party platform, later diplomatic liaison to the 1992 Clinton-Gore presidential campaign. She also served as an advisor to Gore's presidential campaign. Former ambassador to Portugal; a member of Oliver North's National Endowment for Democracy. Currently, senior managing director of Manatt Jones Global Strategies, LLC, and a deputy director of the "Public Diplomacy Task Force" at the Council on Foreign Relations.

• Jeremy R. Azrael - RAND. Formerly, advisor to Secretary of State George Schultz. Served as a National Intelligence Officer on the staff of the director of Central Intelligence and as a senior analyst at the Central Intelligence Agency. Before joining the government, spent many years as a professor of political science and chairman of the Committee on Slavic Area Studies at the University of Chicago.

• Jeffrey A. Isaacson - RAND. Theoretical physicist with a doctorate in physics from M.I.T. A RAND vice president, he holds a commission in the U.S. Naval Reserve.

• Zalmay Khalilzad - A signee of the Project for the New American Century's prescriptions to Clinton, and a co-author of the "Transition 2001" report. He is the highest-ranking, native-born Muslim in the Bush administration. On September 24, 2003, President Bush named Khalilzad U.S. Ambassador to Afghanistan. He was sworn in on June 21, 2005 as U.S. Ambassador to Iraq.

• Robert Satloff - Director for policy and planning of the Washington Institute for Near East Policy, a pro-Israel and AIPAC-linked think tank. Satloff is also a commentator at Al Hurra TV, the US funded "public diplomacy" satellite television network broadcast to the Middle East to counter to Al Jazeera.

• Thomas A. Dine, Radio Free Europe/Radio Liberty - AIPAC member. Appointed by Secretary of State George Schultz to a "blue ribbon" panel entrusted with making recommendations in the State Department's foreign aid program. Dine went on to sit on the Committee for the Liberation of Iraq.

• Michael D. Rich, Executive Vice President of RAND, also a governor of of the International Institute for Strategic Studies (IISS) in London.

• Ashton Carter - Consultant to the MITRE Corporation and Goldman Sachs, senior partner at Global Technology, chairman of the advisory Board at MIT’s Lincoln Laboratories and Draper Laboratory Corporation. Member of IISS, National Committee on U.S.-China Relations.

Carlucci's panel prescribed how Bush should run his administration. The report was specifically addressed to Bush. From "The Transition and After Inauguration - People and Process" section: "The most immediate task in foreign policy and national security is to create the core team ... These key officials and the working relationship among them must be
firmly in place before you can exercise leadership in foreign affairs or carry out your duties as commander-in-chief. This task should be completed before the inauguration."

In the Carlucci panel report, Bush learned that the "missile defense issue will be among the most critical for your administration. Indeed, mishandling this issue could have severe consequences across a wide range of concerns, including the nation’s military security and relations with the allies, Russia, and China.... Within the membership of the Transition 2001 panel, there is a basic agreement that creating an effective NMD capability is part of an overall strategy not only of
protecting the nation against a limited ballistic-missile attack but also of ensuring that the United States will continue to be able to project conventional military power credibly. "

North Korea: "A review by the intelligence community of emerging long-range threats posed by states such as North Korea, Iran, and Iraq, including the likely timelines for their appearance and an assessment of the prospects for avoiding them via diplomatic agreement (e.g., a possible deal with North Korea)."

Iraq: As long as you are willing to pay the political and operational costs of a continued military campaign against Iraq, the campaign should be directed against targets that count: the forces of elite units, regime-protection assets, and suspected WMD sites.... In few, if any, other areas of foreign policy is the development of contingency plans rooted in a longer-term strategy more necessary at the outset of your administration.... Iraq must be prevented from making any substantial progress with any of its WMD programs."

The Oil Market: "You should consider an agreement with our allies that in the event of an Iraqi-inspired oil crisis, we will all draw on strategic reserves until other producers can replace as much of the shortfall as possible. Your preparations should include efforts to reach a prior agreement with Saudi Arabia, which has the largest excess production capacity."

Colombia: "Early in your administration, you could confront a crisis in Colombia, stemming from the Colombian government’s loss of control over large parts of the country, as well as general instability...."

NATO and the EU: "The United States will continue to be deeply committed both to NATO and to U.S. relations with the EU. You continue to support NATO enlargement, but you will make precise decisions for the United States later. You will review U.S. policy toward the Balkans, but changes, if any, will be made only in concert with the NATO allies."5

Postscript: In February, 2001, Frank Carlucci and Dick Cheney met with Rumsfeld when the Carlyle Group had a score of billion-dollar defense projects under consideration at the DoD. Out of these negotiations, the Carlyle Group profited very handsomely.6