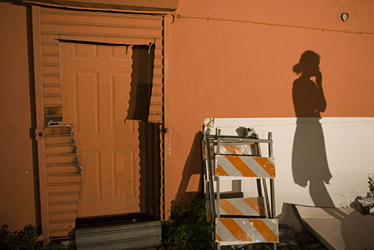 The arrested men appear to be part of a cult organization proclaiming itself to be Muslim - although a member of the same
religious group says it is, in fact, based on a homebrew of Islam and Christianity, and calls itself "Seas of David."

There were conflicting reports about the identity of the arrestees.

But another enforcement official denied that the group had any links with Al-Qaeda or other foreign terrorist organizations.

"These people were not related to Al-Qaeda," he told the American all-news network.

Residents said the arrested men appeared to be part of a CULT of at least a dozen people.

They said the men were sleeping in the warehouse, dressing in military-like clothing and doing exercises.

A man identified as a member of the "Seas of David" religious group told CNN on Thursday that five of his fellow members were among those arrested and that they had no connection to terrorists.

"We are not terrorists. We are members of David, Seas of David," said the man, identified as Brother Corey.

"We study and believe in the word of God," he told CNN.

"This is a place where we worship," he added.

Brother Corey said the "Seas of David" blends the teachings of Christianity and Islam.

"We study Allah and the worship of the regular Bible."

He said his group had connections in Chicago.

The Miami Seven: How Serious Was the Threat?

The group indicted for terror plans appears to have had more in common with homegrown cults than al-Qaeda terrorists. Which doesn't mean they weren't dangerous

Posted Friday, Jun. 23, 2006
The Federal government has indicted seven men arrested in Miami on charges of conspiring with al-Qaeda to conduct terror attacks inside the U.S. Among the ostensible targets named in the indictment was Chicago's Sears Tower. But was this a credible terror conspiracy? As the story unfolds, here are four skeptical questions worth pondering.

Was this an al-Qaeda-linked plot, or were these men simply wannabes?

From initial reports and the contents of the indictment, the latter seems most likely. The arrested men appear to be part of a cult organization proclaiming itself to be Muslim — although a member of the same religious group says it is, in fact, based on a homebrew of Islam and Christianity, and calls itself "Seas of David." Its members, mainly Americans and Haitan immigrants, clearly have an enthusiasm for emulating and following al-Qaeda. But their only "connection" with al-Qaeda appears to have been the fact that a government informant who had infiltrated their ranks had apparently convinced the alleged conspirators that he was, in fact, a Qaeda operative. The oaths of allegiance to the organization alleged by the indictment to have been taken by the accused were administered not by any representative of the organization, but to a U.S. government agent posing as a Qaeda operative.

Were they behaving as professional terrorists?

No, at least not according to the initial flood of reports that portayed them as strutting around a poor black neighborhood in military-style uniforms, wearing turbans, standing guard around the abandoned warehouse in which they lived and conducting late-night exercise drills, while telling neighbors that they had "given their lives to Allah." The basic habit of trained terrorists is secrecy and stealth; they do their utmost to fit in with their surroundings rather than stand out. The Miami seven, according to reports thus far, seemed to have been doing the exact opposite, behaving more like a Hollywood B-movie version of terrorists than the real thing.

Can amateurs and wannabes pose a real terror threat?

Yes, very much so. The London bombings last summer were carried out by a self-taught group of British-born men who had no direct connection with al-Qaeda, yet sought to emulate it. But that grouping, perhaps having learned from the Qaeda terror manuals widely available on jihadist web sites, seem to have observed many of the same principles of secrecy that a
group like the 9/11 plotters would have . Friends, family and neighbors were shocked to learn that young men in their midst who seemed no different from any others turned out to be terrorists. The extent of the danger represented by such groups depends on their capacities: Are they able to operate undetected? Do they have the means to carry out attacks? Do they have
workable plans for such attacks?

Was this really a plot?

The indictment accuses the men of plotting to blow up FBI offices and the Sears tower. They apparently gave the government informant, whom they believed was their Qaeda contact, photographs of FBI and other law enforcement facilities in Florida, indicating that they had done some surveillance. The indictment refers to a desire by the group's leader to attack the Sears
tower, and a request for a video camera in order to conduct surveillance mission to that end, although it doesn not suggest such a mission actually took place. From the indictment it is clear that the men had no shortage of ambition, asking for al-Qaeda training to wage a "full ground war" to "kill all the devils we can." To his end, the group asked the undercover agent
for a wish-list of equipment that included boots, uniforms, machine guns, bullet-proof vests, radios and vehicles — as well as $50,000 in cash. The group's leader also provided the government agent with "a list of shoe sizes for the purchase of military boots for his 'soldiers'." The idea that these seven men could wage a "ground war" in the U.S. seems to have more in
common with the fevered thinking behind various deadly cults over the years than with the operations of international terror networks.

Fevered minds can be very dangerous, of course. But the threat they present is quite different from that of transnational terror groups. After all, the government appears to have had no problem infiltrating and exposing this group, which was hardly making itself inconspicuous or impregnable — unlike the New York subway plot reported in TIME this week, whose
perpetrators slipped into the U.S., conducted their surveillance, prepared the operational details of poison gas attacks, then aborted them on instructions from al-Qaeda leaders and departed America, all with U.S. security none the wiser.
Posted by Alex Constantine at Friday, June 23, 2006