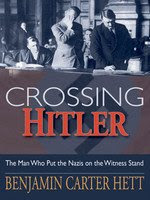 In the time after the failed Munich Beer Hall putsch, his short-lived imprisonment, and the writing and publication of Mein Kampf, but before his appointment as chancellor of Germany, Adolf Hitler was summoned as a prosecution witness by lawyer Hans Litten in the trial of four storm troopers.

The storm troopers were charged with attempted murder as members of a “roll commando” — essentially a paramilitary unit whose function was to seek out and attack or even kill political opponents.

“Crossing Hitler” offers an unfamiliar look at the life of — and consequences for — Litten, a 27-year-old Mischlinge (“crossbreed,” having Jewish ancestry) who intentionally chose cases that brought him into direct conflict with the rising Nazi party.

The failed putsch taught Hitler the need for acquiring power through legal means.

To that end, the succeeding years saw him trying to achieve a balance between proclaimed legality designed to reassure middle-class voters and cautious support of the violent proclivities of the SA, the storm troopers, in order to also keep their allegiance. That internal SA revolts against Hitler and the central Nazi party leadership erupted periodically indicates how delicate the balance was.

After a one-year ban following a deadly Berlin brawl, the Berlin SA began a new strategy for gaining political support: gradually moving in and taking over taverns in working- class districts where the political opponents of the Nazis predominated. Using the taverns as a base, SA members went out into neighborhoods fomenting violence.

The SA’s Storm 33 armed attack at the Eden Dance Palace gave rise to the trial in which attorney Litten called Hitler as a witness.

This trial was not the first time Litten had confronted members of Storm 33 in court. But in the Eden trial, Litten’s strategy was markedly different from that of the reluctant state prosecutor Stenig. Litten intended to use the trial to make a broad political point: “that the violence committed by Storm 33 was an essential element of the Nazi program” carried out on Hitler’s direct orders.

In this way, Litten hoped to expose the contradictions on which the Nazis’ appeal was based.

Only someone like Litten could dare to summon prominent leaders to give account in court. With his photographic memory and confidential information supplied by disgruntled SA members, Litten subjected Hitler to a “withering cross-examination” that left Hitler sputtering.

Litten’s choice of strategy ensured that he would be hated, remembered, and among the first arrested after Hitler was named chancellor.

The issue of choice is a real, significant and complex one. In all my classes I ask students to consider the choices they have made or might make in the face of antisemitic remarks, actions or stereotypes.

We consider Yehuda Bauer’s proposition, expressed in his “Rethinking the Holocaust,” that “any event is the result of the interaction of an infinite number of causal chains ... that ... interact and constantly change positions ... [based on] choices; and it is people who make the choices.”

Litten himself faced life-or-death choices, which he called the “double edge of the deed.” When confronted with the questions of how much to risk, he chose the dangerous answers over the safe ones, dying in a concentration camp despite international efforts to free him.

Litten’s story offers the reader an opportunity to ponder the choices he made, to consider the reasons why the German Association of Democratic Lawyers and the European Association of Lawyers for Democracy and World Human Rights today give an annual prize for human rights advocacy in his name, and to challenge one’s personal choices when confronted with violations of justice and human rights, whether in the United States or abroad.

Linda Short, who has a law degree, is lecturer in Jewish Studies with an emphasis in the Holocaust at Penn State.
Posted by Alex Constantine at Sunday, May 31, 2009