Beyond the Bishop
By Heidi Beirich
http://www.splcenter.org/intel/intelreport/article.jsp?aid=1061
Summer 2009

Dickinson, Texas — Twenty miles north of Galveston, at the busy intersection of two once-rural state highways that are now crowded with mini-malls and drugstores, stands the oldest church in the United States belonging to the Society of St. Pius X (SSPX). A peaceful Catholic church with priests in residence, Queen of Angels shows no sign of the international controversy that erupted in January, when Pope Benedict XVI lifted the excommunication of four SSPX bishops. 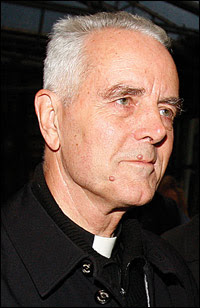 Most of that controversy has centered on one of the reinstated bishops, Richard Williamson, who is infamous for his Holocaust denial and anti-Semitism. In January, just a few days before the pontiff invited Williamson back into the church, he appeared on a Swedish TV program insisting the Nazis had no gas chambers. "I believe that the historical evidence is strongly against — is hugely against — 6 million Jews having been deliberately gassed in gas chambers as a deliberate policy of Adolf Hitler," Williamson said. "I believe there were no gas chambers."

The Vatican said the pope had been unaware of Williamson's views, which provoked a firestorm of criticism, some of it from ranking Catholic officials.

By the end of January, the pope had decided Williamson would not be allowed to perform priestly functions unless he recanted his views. In early February, Williamson was also suspended from his post as head of the SSPX seminary in La Reja, Argentina, and SSPX Superior General Bernard Fellay issued an order forbidding Williamson to make "any public statements on political or historical issues." Later in the month, Argentina expelled the bishop and he returned to his native England.

That wasn't all. Fellay also told the world that Williamson's beliefs "do not in any way reflect the position of our Society." But the facts do not support him. The truth is that Williamson's thinking reflects much of basic SSPX doctrine.

As the international furor over Williamson grew, SSPX officials rushed to scrub their websites of offending material. In February, for instance, a 1997 article by two SSPX priests that called for locking Jews into ghettos because "Jews are known to kill Christians" disappeared. But the makeover was far from complete.

Still on sspx.org at press time was a 1959 letter from a close friend of SSPX's founder. "Money, the media, and international politics are for a large part in the hands of Jews," Bishop Gerald Sigaud wrote. "Those who have revealed the atomic secrets of the USA were … all Jews. The founders of communism were Jews." And as of early February, the Canadian SSPX website still hosted an archive of Williamson's anti-Semitic letters, one of which complains that "Jews have come closer and closer to fulfilling their … drive toward world domination."

SSPX and Queen of Angels

SSPX, which has chapels and schools across the U.S. and worldwide, was founded in 1970 by the late French archbishop, Marcel-François Lefebvre, a hard rightist who supported the pro-Nazi Vichy regime. Though he participated in the Second Vatican Council (1962-65) that enacted several liberalizing reforms within the church, Lefebvre ultimately refused to sign certain of the council's final reports and in 1974 publicly denounced the effort as heretical. He was particularly upset by the adoption of the new Mass, celebrated in local languages instead of the traditional Latin. As a result, then-Pope Paul VI ordered the archbishop to shut down his Swiss seminary, but Lefebvre refused to comply, leading the Vatican to suspend his right to perform priestly functions (a step short of excommunication) in 1976. In 1988, Lefebvre took his most radical step yet, consecrating four bishops, including Williamson, in defiance of the Vatican. Pope John Paul II then excommunicated Lefebvre and his bishops, declaring SSPX in formal schism with the church. 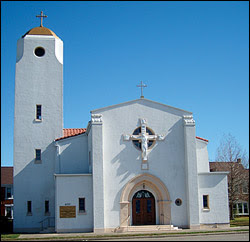 Queen of Angels was the first SSPX church founded in the U.S. and served as the group's headquarters until 1978, when the leadership moved to St. Marys, Kan.

Dedicated by Lefebvre in 1977, the property features a pretty white church, set amid dormitories and a shrine to the Virgin Mary, that looks like it was built by Texas' original Spanish settlers. Attached to the front of the church is a big, bronze plaque announcing that it is part of SSPX and that traditional Latin masses are held twice daily. Inside the church itself are an impressive altar, stone sculptures and stained glass windows. Today, the only hint of the recent controversy is a notice on the inner doors of a letter from Superior General Fellay, expressing "our filial gratitude" for the lifting of the excommunications. No mention is made of the Pope's subsequent demand that Williamson recant his Holocaust denial—even though Williamson's views, and the Pope's rejection of them, have been broadcast around the world.

Perhaps there is a reason for why nothing is said of Williamson at Queen of Angels. As the place where the SSPX's Angelus Press first set up shop, the church itself has long been in the business of peddling anti-Semitism. Proudly on display in the small and musty one-room Queen of Angels bookstore, which is located behind the church, are all sorts of Catholic materials, from rosaries to advent calendars — plus hate literature, much of it either published or sold by Angelus Press. The history section prominently displays Hilaire Belloc's The Jews, which blames Jews for Bolshevism and corrupt financial practices. In a tall turnstile filled with pamphlets are several copies of Time Bombs of the Second Vatican Council, where SSPX's former superior general, Rev. Fr. Franz Schmidberger, pontificates on the Vatican Council's evils. Schmidberger denounces Third World immigration into Western countries as "destroying our national identity and, furthermore, the whole of Christianity," and goes on to accuse the Jews collectively of deicide.

Also on hand at Queen of Angels bookstore are dozens of current and back copies of The Angelus, a monthly magazine put out by the SSPX that has published several extremists. Found in the pages of The Angelus (and carried on the SSPX's website) are the writings of the late Father Denis Fahey, whose main topic was the inherent evil of the "Jewish Nation" and who is quoted on a white supremacist site devoted to "1,001 Quotes By and About Jews"; John Vennari, who publishes Catholic Family News and has written of a Judeo-Masonic conspiracy to destroy the church; and Robert Sungenis, the leader of a particularly virulent group called Catholic Apologetics International who frequently reminds people that the 1911 edition of the Catholic Encyclopedia "predicts the anti-Christ will come from Jewry."

One item that was not on hand at Queen of Angels was the viciously anti-Semitic conspiracy tome, The Protocols of the Elders of Zion, which has been sold in the last few years by representatives of Angelus Press at far-right Catholic conferences and, in the past, from its headquarters in St. Marys, Kan. The Protocols probably won't surface again — SSPX officials have been cleaning their websites of controversial materials since the Williamson controversy erupted.

The 1997 article that was scrubbed, published by The Angelus and written by Michael Crowdy and Kenneth Novak, didn't stop at accusing Jews of murdering Christians. The article also blames Jews for the French Revolution, communism and capitalism; suggests a Judeo-Masonic conspiracy has destroyed the Catholic Church; and says Judaism is "inimical to all nations." The Williamson letters remaining on the Canadian SSPX website also were revealing. In "WTC—The Wage of Sin," Williamson blames the 9/11 terrorist attacks on "the would-be architects of the New World Order" who are clearly Jews, although he is not explicit. "In the Catholic Middle Ages the Jews were relatively impotent to harm Christendom, but as Catholics have grown over the centuries since then weaker and weaker in the faith, especially since Vatican II, so the Jews have come closer and closer to fulfilling their substitute-Messianic drive towards world dominion," he added.

Williamson is only one of many SSPX leaders who have expressed anti-Semitic views. Also on the Canadian site at press time was a piece by SSPX Rev. Fr. Emmanuel Herkel called "Is the Anti-Christ Coming?" Herkel asserts that Jews are considering rebuilding "the ancient Temple of Jerusalem" which he argues "would fit in with the devil's desire to mock the holy places of God." "If the ancient Temple is rebuilt and is the place where the Antichrist will receive divine worship, it must follow that the Antichrist will be Jewish," Herkel writes. "The devil will not fail to make use of their blindness to foist the Antichrist upon them," he concludes.

Other SSPX officials sound similar. In 1997, French SSPX Bishop Bernard Tissier de Mallerais, one of the four bishops excommunicated by Pope John Paul II, wrote that "Jews are the most active partisans for the coming of the anti-Christ." After the Williamson controversy broke out, Fr. Floriano Abrahamowicz, a pastor and spokesperson for the SSPX in Northern Italy, defended Williamson and said he, too, was unsure if gas chambers were used for anything but disinfection or whether 6 million Jews were really murdered. He called the Jews a "people of deicide."

Not all members of SSPX agree. Father Paul Morgan, the SSPX district superior for Great Britain, issued a statement in late January denouncing Williamson and declaring his division's opposition to "all forms of racism and anti-Semitism." Even so, the anti-Semitism that has been expressed by SSPX leaders, sold by Angelus Press and published on the group's websites makes a mockery of Superior General Fellay's statement that Williamson's beliefs "do not in any way reflect the position of our Society." Williamson is also making a mockery of Fellay's demand that he not "make any public statements on political or historical issues."

In a Feb. 9 interview with the leading German newsmagazine Der Spiegel, Williamson, who is being investigated in Germany for having violated that country's criminal laws forbidding Holocaust denial, said he would reevaluate the facts of the Holocaust — including, presumably, his claim that fewer than 300,000 people died in Nazi death camps. But he added that the information available in the 1980s put the existence of the gas chambers and the entire Holocaust in question. Asked if he would visit any concentration camps, he declared, "I will not travel to Auschwitz."

How any of this squares with Pope Benedict XVI's statement on Feb. 12 that the Catholic Church "is profoundly and irrevocably committed to reject all anti-Semitism" is unclear. Meanwhile Rev. Arnaud Sélégny, the general secretary of the SSPX international headquarters in Menzingen, Switzerland, is on record saying that Williamson would certainly be included in any reconciliation between SSPX and the Vatican because "everybody is allowed to have his opinion in the Society."

http://www.splcenter.org/intel/intelreport/article.jsp?aid=1061
Posted by Alex Constantine at Thursday, May 28, 2009