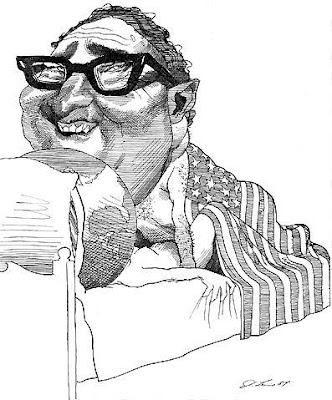 " ... Nancy Kissinger, who was sitting next to me, recommended the pigs in blankets. ... "

Last night, at The River Club, Henry Kissinger threw a book party for his protégé, Joshua Cooper Ramo. Handsome and fluent in Chinese, Ramo speaks with the rapidity and grace of those who appear regularly on television. He’s the youngest full partner of Kissinger Associates, a geostrategic advisory firm. Naturally, his book—which is already a best seller—is called “The Age of the Unthinkable.”

In a wallpapered room overlooking the East River, among waiters passing canapés of foie gras and lobster, I asked Ramo about the genesis of his book. “The summer before September 11th,” he said, “I had been doing volunteer work in an AIDS hospice in South Africa and I realized our foreign policy was failing in a huge and dramatic way. Basically, it was morally indecent. Then I came back and saw September 11th, and saw that it was intellectually incoherent as well. It was at that point where I really started saying to myself, ‘Okay, something is deeply flawed in our system.’” Ramo says he wrote from four to eight every morning.

Ramo concludes that the models we use to think about the world, and to solve our problems, are wrong. He thinks we should study terrorists, hedge-fund managers, (there’s a chapter called “The Management Secrets of Hizb’allah”), and other innovators who have learned to be resilient in a time of crisis.

But what about his boss? “Dr. Kissinger’s summary,” he said, “after reading my book, was, ‘My understanding from reading this book is that you have complete contempt for me.’ As an employee, it’s kind of a conversation-ender, but I’ve done my best to recover from that.”

Kissinger, who nonetheless was full of high praise for “young Joshua” admitted as much: “It has one basic theme that is a little difficult for me, which is that my generation is sort of a bunch of dodos, that we stagger through life with just one idea in our minds, which on top of it, is hugely wrong. We don’t have the perception to look at the multiplicity of events that the modern generation experiences.”

Nancy Kissinger, who was sitting next to me, recommended the pigs in blankets. I asked if she could explain geostrategic advising.

“I haven’t the vaguest idea!” she said. “Your guess is as good as mine.”

http://www.newyorker.com/online/blogs/books/2009/05/last-night-at-the-river.html
Posted by Alex Constantine at Sunday, May 24, 2009