Democrats: CIA is Out to Get Us 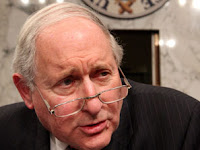 Dems, including Sen. Carl Levin, charge that the CIA has released documents about congressional briefings on waterboarding in order to deflect blame away from itself.

Democrats charged Tuesday that the CIA has released documents about congressional briefings on harsh interrogation techniques in order to deflect attention and blame away from itself.

“I think there is so much embarrassment in some quarters [of the CIA] that people are going to try to shift some of the responsibility to others — that’s what I think,” said Sen. Carl Levin (D-Mich.), who sat on the Senate Intelligence Committee and was briefed on interrogation techniques five times between 2006 and 2007.

Illinois Sen. Dick Durbin, the No. 2 Democrat in the Senate, said he finds it “interesting” that a document detailing congressional briefings was released just as “some of the groups that have been responsible for these interrogation techniques were taking the most criticism.”

Asked whether the CIA was seeking political cover by releasing the documents, Intelligence Committee Chairwoman Dianne Feinstein (D-Calif.) said: “Sure it is.”

The CIA has long been on the receiving end of harsh rebukes from Congress — on intelligence failures leading up to the war in Iraq, on secret prisons abroad and on the harsh interrogation techniques used on terrorism suspects. But with the release of records showing that it briefed members of Congress along the way, the CIA has effectively put lawmakers on the defensive.

Intelligence officials insist it wasn’t intentional and have not taken responsibility for publicly releasing the documents.

Asked for comment about the Democrats’ charges, CIA spokesman George Little said only that the CIA “understands the importance of a strong relationship with the Congress, which in our democracy, conducts oversight of secret intelligence activities.”

But another U.S. intelligence official went further, noting that the records of the congressional briefings were “prepared in response to a request from Congress.”

Intelligence Committee member Russ Feingold (D-Wis.) said it appears that “members of the committee or their staff were not in any way involved in [the release of the document]. It appears to come from the executive branch itself. ... I think it’s unbelievable.”

A top congressional official who has participated in the briefings added: “I think the agency wanted to get this out, quite frankly.” ...