Free Speech and the Far Right 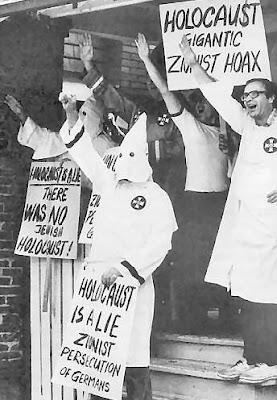 Austrian law prohibits public denial, belittlement, approval or justification of Nazi genocide or other Nazi crimes against humanity in a print publication, in broadcast, or in other media. The law prohibits public incitement to hostile acts against a church, religious society, or group because of its race, nationality, or ethnicity, if that incitement poses a danger to public order. It also prohibits incitement, insult, or contempt against these groups if it violates human dignity…

A Viennese jury this week convicted Gerd Honsik, 67, to five years in prison for violating the Nazi Prohibition Act which forbids the denial of National Socialist crimes.

The trial started on April 20 and lasted for three days. Honsik was earlier found guilty of similar charges, but fled in 1992 abroad during his appeal. He spent 15 years in Spain where he continued his pro-Nazi publicity work via the Internet and by publishing books, which prompted further charges. Austria demanded his extradition several times. Finally, in 2007, Spain deported him.

Honsik pretended in court to be a “social democrat” and said he had only “rejected the textbook wisdom that demonizes National Socialism”. He argued that he never outright denied the existence of gas chambers where six million Jews were killed; rather he had only ruled them out “wherever I had not verified the (facts) myself”.

In April, around the anniversary of Hitler’s birth, Honsik’s friends intensified their efforts to show solidarity with Honsik - the “Historian”, “Poet”, “Dissident” and “Philanthropist” - through willful damage to property in eastern Austria against his alleged political persecution. Honsik’s lawyer, Herbert Schaller, tried his level best to damage the interests of his client, by denying on the first day of the trial the existing of gas chambers. This is “not fact” but mere “prevailing opinion,” he said. Because of that, the prosecution against him was launched.

Honsik denied the charges and said he would appeal against the verdict.

Prosecutor Stefan Apostol is seeking a longer jail term for Honsik, who potentially faces up to 20 years prison on the charges of “re-engagement” in public promotion of Nazi ideology in his magazine “Halt” and several books.

Apostol called Honsik “one of the ideological leaders” of Europe’s neo-Nazi scene and said he had distributed his “hate magazine” at schools. The Vienna court ordered offending editions of the magazine withdrawn from circulation.

Judge Andreas Boehm cited Honsik’s previous conviction, his “repeated shows of contempt” for the law, his escape to Spain and continued propaganda activity there as key factors in the verdict and prison term. The Austrian news agency APA reported that after Boehm repeatedly rejected Honsik’s confused motions to admit evidence as irrelevant on Monday, the defendant began screaming and beating his fists on his table in the dock.

Honsik argued in court that the Waffen SS was not criminal. His evidence: a picture of some Waffen SS leaders shaking hand with Polish resistance fighters. Judge Boehm remarked, “but after that, they were shot.”

Apostol described Honsik as a historical revisionist, someone who misrepresents what he really is. Especially now when a deep crisis is underway, the extreme right becomes in Europe a danger to democracy.

Over half the states of Europe now criminalize Holocaust denial. They accept the premise that deniers are extremists who use denial, among other means, to rehabilitate Nazism. Their legal rationale in doing so is usually that denial negates the historical facts established at Nuremburg in 1945, rather than that it constitutes offensive or threatening speech.

International agreements take the same line and this was reinforced and given a legal basis in April 2007 by the EU Common Framework Decision, which requires European states to criminalize denial. Legislation, however, has not stopped extremists from continuing to promote Holocaust denial and they are now joined and invigorated by Iran, which promotes it as state policy. Nevertheless, states now accept that Holocaust education is vital and several intergovernmental initiatives offer hope for the future.

Two far-right, anti-foreigner parties combined for almost a third of votes in Austria’s 2008 national election and Austria is a country accused by Amnesty International of “institutional racism.”

At the same time, Austria has a severe legislation against the denial of Nazi crimes has curbed the activities of Neo-Nazi. On February 20, 2006, a Vienna jury sentenced the “historian” David Irving to three years’ imprisonment for denying Nazi crimes. The court’s decision prompted much negative commentary both within Austria and internationally. I have argued the case for the Austrian law forbidding Nazi activities and against those who take an absolutist approach to the right to freedom of expression.

The case of Hungary, where there is tolerance of hate speech as well as demonstrations by neo-fascist groups in the image of the Arrow Cross, and where several gypsies have been murdered since 2008, shows also that the Austrian laws are necessary in Europe, especially in countries where Jews and others were persecuted and murdered during the Second World War.

That Holocaust denial cannot be tolerated has been recognized by President Obama recently.”To this day, there are those who insist the Holocaust never happened, who perpetrate every form of intolerance,” he said, “We have an opportunity as well as an obligation to confront these scourges… That is my commitment as president.” He added, “How do we ensure that ‘never again’ isn’t an empty slogan or merely an aspiration, but also a call to action? I believe we start by doing what we are doing today - by bearing witness, by fighting the silence that is evil’s greatest co-conspirator.”

This brings me to YouTube, which broadcasts Holocaust denial and other Nazi incitement by Austrian neo-Nazis. YouTube should be confronted with this declaration of the president of the United States of America and be asked not to continue to enable those who violate the Austrian laws.

It is to be hoped that the American public in the USA understands that the First Amendment cannot, for historical reasons, be applied in Europe. European neo-Nazis and Holocaust deniers should not be allowed to abuse the American Constitution.