If it was Muslim extremists, how much press would they receive (I've seen very little about this case in the public print) - and what would the bail be? ... "An Antioch man [Nazi] released on $100 bond even though police found weapons, explosives and an anti-tank rocket and launcher in the house he shares with his father ... "
http://www.suntimes.com/news/24-7/1754764,CST-NWS-antitank05.article 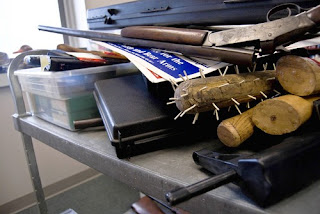 Father, son charged after cache of weapons, Nazi gear and drugs are found in their home near Antioch
By Ruth Fuller
Chicago Tribune
September 4, 2009

A father and son were charged with felonies Friday after a raid of their home Wednesday night netted a cache of weapons, explosives, Nazi paraphernalia, manuals and chemicals to make explosives, drugs and cash, Antioch police said.

The men, who live in unincorporated Lake County near Antioch, were being held in the police department on Thursday and are expected to appear in Bond Court on Friday morning, Cmdr. Jim Ruth said.

Burl Thomas, 56, of 25100 block of West Linden Lane was charged Thursday evening with unlawful use of a weapon, armed violence, possession of marijuana and cocaine with intent to deliver and having drug gear. His son, John, 24, was charged with resisting arrest.

About 400 grams of marijuana, 1 1/2 ounces of cocaine and $1,000 were found, police said. Arrest records indicate John Thomas has convictions for aggravated assault, battery, disorderly conduct and a hate crime.