Orly Taitz and the Birthers Falling Down into the Rabbit Hole

" ... Judge Land tossed the suit as frivolous, granted the defendants (the US Army) court costs and warned wacko birther attorney Orly Taitz that if she brought another such suit into his court she would face legal sanctions ... " 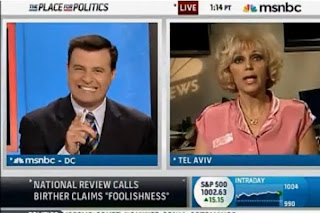 Today a federal judge down in Columbus dismissed yet another suit by a military officer seeking to duck service in Iraq by claiming that Barack Obama is not a citizen.

Just for grins, I went and read the order. It’s pretty good stuff.

Here’s a taste from the acid pen of Judge Clay Land:

First, Plaintiff’s challenge to her deployment order is frivolous. She has presented no credible evidence and has made no reliable factual allegations to support her unsubstantiated, conclusory allegations and conjecture that President Obama is ineligible to serve as President of the United States. Instead, she uses her Complaint as a platform for spouting political rhetoric, such as her claims that the President is “an illegal usurper, an unlawful pretender, [and] an unqualified imposter.” (Compl. ¶ 21.)

She continues with bare, conclusory allegations that the President is “an alien, possibly even an unnaturalized or even an unadmitted illegal alien . . . without so much as lawful residency in the United States.” (Id. ¶ 26.) Then, implying that the President is either a wandering nomad or a prolific identity fraud crook, she alleges that the President “might have used as many as 149 addresses and 39 social security numbers prior to assuming the office of President.” (Id. ¶ 110 (emphasis added).) Acknowledging the existence of a document that shows the President was born in Hawaii, Plaintiff alleges that the document “cannot be verified as genuine, and should be presumed fraudulent.” (Id. ¶ 113 (emphasis added).)

Finally, in a remarkable shifting of the traditional legal burden of proof, Plaintiff unashamedly alleges that Defendant has the burden to prove his “natural born” status. (Id. ¶¶ 136-138, 148.) Thus, Plaintiff’s counsel, who champions herself as a defender of liberty and freedom, seeks to use the power of the judiciary to compel a citizen, albeit the President of the United States, to “prove his innocence” to “charges” that are based upon conjecture and speculation. Any middle school civics student would readily recognize the irony of abandoning fundamental principles upon which our Country was founded in order to purportedly “protect and preserve” those very principles.”

Judge Land tossed the suit as frivolous, granted the defendants (the US Army) court costs and warned wacko birther attorney Orly Taitz that if she brought another such suit into his court she would face legal sanctions.

In an apparent effort to cement her claim to the crown of wacko birther, Taitz told the folks at Talking Points Memo that Judge Land is “a typical puppet of the regime — just like in the Soviet Union” and that “somebody should consider trying [Land] for treason and aiding and abetting this massive fraud known as Barack Hussein Obama.” The human species is remarkable in its wondrous diversity and ability to entertain, is it not?