Litvinenko: " ... the radioactive element used to poison the former spy could not have come from Russia ... " 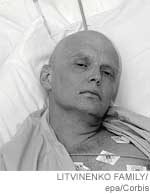 Litvinenko's death mystery deepens as his associate lapses into coma

[Q: Where were ARMITAGE and GROSSMAN?]

Five weeks after Alexander Litvinenko suddenly fell ill at the hands of an unknown poisoner, the riddle of his murder and the uneasy diplomatic stand-off that surrounds it grew ever more knotted in intrigue and tragedy.

As the former Russian spy's radioactive body was laid to rest in a north London cemetery, the authorities in Moscow announced they were investigating the attempted murder of one of his business associates.

Dmitry Kovtun, one of two Russian businessmen who met Mr Litvinenko on several occasions in London prior to his assassination, was reported to be in a coma in a Moscow hospital last night after testing positive for polonium-210.

In a day of further twists, it was revealed that seven workers at the Millennium Hotel in Mayfair, where the men met on 1 November, had also tested positive for the radioactive isotope, the Independent reports.

The discovery of significant levels of contamination last night moved the hotel centre stage in the effort to pinpoint where and when Mr Litvinenko and Mr Kovtun were contaminated.... 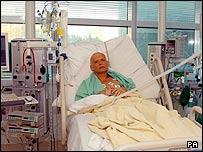 "Prosecutor-General Yuri Chaika also insisted that the radioactive element used to poison the former spy could not have come from Russia . ... "
06.12.200

Russia not to extradite suspects in Litvinenko's death

... In a further possible setback, a lawyer for a man regarded by the Yard as one of their best witnesses said he could not see them immediately because he was in hospital undergoing further tests for contamination with polonium-210, the Guardian reports. ... 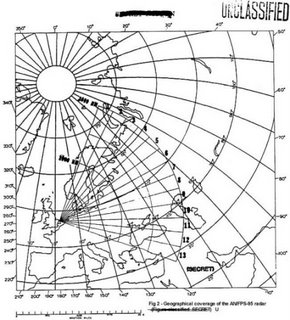 Bermuda triangles can be created by modern military radars

Norfolk is a low-lying county in East Anglia in the east of southern England. Norfolk is a very quiet place but for drivers it is some kind of Bermuda triangle. On the coast near Cromer many of them experience problems with engines, transmission windshield wipers etc. 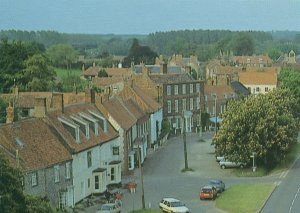 At first authorities gave no sensible explanation of this paranormal phenomenon and people believed that this 'dead' area was under aliens' control. However MOD officials have recently cleared the situation.

The MOD has finally come clean about the car-molesting radar installation in Norfolk which made merry with passing motorists' electronics, the Evening Standard reports. 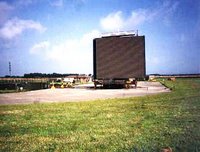 A probe into the Type 93 radar showed it was "'out of alignment" for three months from November 2005. Specifically, "unserviceable phase shifters and drop in wave guide air pressure" were fingered at the cause. Defence expert Jonathan Levy explained to the Standard: "The phase shifters control the frequency of the radar. When this changed it could have moved the frequency close to the immobilisers of cars. The effect would be like disrupting a circuit by putting a magnet near it.