"...I should hope that those who are active within 9-11 Truth, deal with this matter in the only appropriate manner, and that would be, by grabbing you and your little buddies by the throat, and knocking the living day-lights out of you all. You are a disgusting little piece of shit... 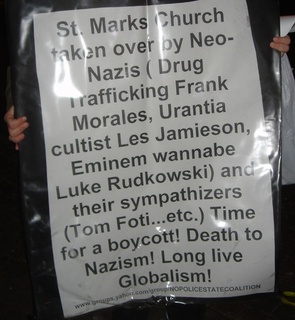 Things are getting more bizarre at the weekly Sunday ny911truth.org meetings at St. Mark's Church.

911bloglines.org reported last week already about 6-8 different infiltration concepts from competing groups inside, and outside the audience (as described at 911close.up)

We are reporting now as things developed tonight with no particular bias.

At around 7 PM EST, a protest outside St. Mark's Church against Les Jamieson and Frank Morales started.

The protest was organized by an ex-Realian named Roman Shusterman, which used to be a regular audience member, until he sympathised with street activist Tom Weiss against Culster Jamieson and Co. (911bloglines.com reported).

The Realians are actually a cult by itself which was also founder of the Clonaid company. This pro-cloning sect also believes humans were created by extra-terrestrial beings who had mastered genetic engineering.

Shusterman, who said he has nothing to do with that sect anymore, handed out leaflets and also organized a placard, which had multiple slogans on it.

The guy who displayed the placard insisted that he didn't write the message, but was "just helping out" and is actually a member of the JDL. (JDL stands for Jewish Defense League)

Leaflet and Text is also available at http://groups.yahoo.com/group/NoPoliceStateCoalition/ and was obviously also supported by Tom Weiss, who was removed several times by Les Jamieson and others, when he insisted that the 9/11 Truth Movement is "infiltrated with LaRouchians". 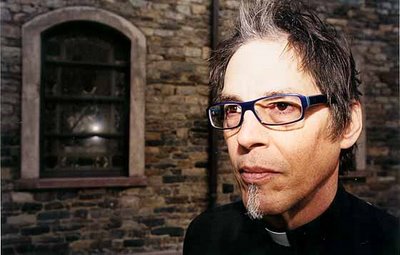 911bloglines.com asked Shusterman, why he thinks, that Pater Frank Morales allegedly supports "drug Trafficking", when Shusterman also started to do a tape interview with one of the confused audience members of the church, who already started to surround the group.

In this Interview Shusterman stated, he has actually "evidence", that Morales allegedly supports a Heroine Drug Ring in Afghanistan (!) and pulled some papers to make his point.

911bloglines had not much chance to follow that argument, because the audience from St. Mark's already started to debate with the protest crowd, which was also supporter from another member of the already diverted no police state -group.

The audience took some photos of the protest crowd.

Tom Foti and Luke Rudkowski, who came out of the church, reacted relaxed and basically got amused by the message, also asked some questions.

It wasn't also really clear, what kind of "globalism" Shusterman supports, but he insisted that he is also against the "New World Order supported by David Ray Griffin"... "and other NeoNazis".

Meanwhile inside the church actually a video presentation of David Ray Griffin started, which was recorded last year.

911bloglines.com informed the crowd about the latest info on Griffin, who runs the 9/11 Truth Movement and a pantheism cult in China, both inspired by Alfred North Whitehead.
http://alexconstantine.blogspot.com/2006/12/911-truthling-infiltration-watch-pt2.html

The ex-realian- pro globalist group is not the only diversion outside the church.

Geo aka cetseson, an independent researcher informs the audience regularly about the shady background of Professor Steven E Jones and David Ray Griffin and why the Inside Jobbers from 9/11 are actually linked to a transnational cartel ("outside job") with more ties to british royalists and other international bankers, than to the CFR (as Tom Foti often pointed out).

On his Sunday night's leaflet, cetseson expressed that Griffin is not only a cultist, but actually attended in 1974 a Rockefeller Foundation Conference in Bellagio (Lago di Como) and reappeared in 1992 and apparently also applied in 2002.
see also http://mysite.verizon.net/vze25x9n/id25.html

Griffin reported: "...Incidentally, I personally, as an individual scholar, went back to Bellagio in 1992, where my wife and I stayed for about 5 weeks. It was there, in fact, that I first developed the conviction that if the world’s global problems are to be solved, we need to move from the present global structure--technically known as global anarchy--to global democracy..."

Frank Morales wasn't outside at this Protest, but is actually supportive of the criticism against Jamieson, but since he's just a "moderator" of the weekly events, he's pointing the finger on that on the so called "committee", led by Foti and Rudkowski.

Cetseson and Morales later spoke with each other, as usually also with a friendly vibe.

Morales asked him to write down the information on Griffin in a more "condensed" way so that it could be 'presented next week'.

Cetseson actually also points out why Loose Change, "24"/FOX, BBC and dutch VPRO are all presenting a hangout version of 9/11 and many other interesting things, which will not have a chance to be mentioned in this short report.

Meanwhile, somehow also bizarre, the presentation of our "best of 911bloglines.com" of the week was approved by Frank Morales and the 'committee', but they didn't allow Nico Haupt to speak, instead Peggy Carter was picked to present the highlights at an open mic.

This Sunday Night was the first official presentation of a reading of 911bloglines.com.

According to the audience, Carter, who actually was skype guest in our radio podcast on Sunday (together with Killtown and JustDiggin), did a good job and presented some bloglines, which stirred some controversy lately.

Among them also some headers on David Ray Griffin(griffinthink.blogspot.com), another one about the cover-up of Attorney Alexander Floum and his powergames on censorship at 911blogger.com and the 9/11 Scholars, which also stirred a fight between Fetzer + Jones.

Other bloglines included the recent Pentagon-Doubletree video, a Wall Street Journal article, which described the butter-effect on the 9/11 (Fakery-) Videos, furthermore Webster Tarpley's statement against Robert Gates, plus an analysis of the recent hangout articles of the Nation, Counterpunch + Co.

The audience reacted very thankful about this new '911blogline-news' service and actually didn't know much about the recent controversies on Jones, Floum, Fetzer + Co.

Les Jamieson, still with Urantia, seemed also to be entertained from this presentation of 911bloglines.com , though it couldn't really be established, which headers he liked or disliked.

If this roundup of Sunday night's ny911 "truth" event wasn't bizarre enough for you, then what about this? :

Tom Weiss, the heckler and protester from Sunday night actually called during last week the Terrorist Intelligence Division of the NYPD (!), which showed up at Frank Morales.

However, as Morales confirmed to 911bloglines.com, he could explain to the Intel Unit, that Weiss was actually just a heckler and that his group wouldn't support terrorists.

The NYPD-ID apparently sympathized with Morales and wasn't interested in a further investigation on that matter.

Furthermore, things are also getting ugly between Jamieson and the "Committee".

As Luke Rudkowski (once close to Loose Change Team) reported to 911bloglines.com, it turned out, that Jamieson abused an email list of 1,000 ny911truth 'members' to promote a forthcoming event from Ward "Little Eichmans" Churchill, the controversial leftgatekeeper figure from last year.

Since Sunday night's event turned into some obscure circus, we couldn't even follow carefully all details, so please bare with us, if we left out additional context.

Fact is, the audience is apparently still as colorful as NYC, therefore somehow still more "progressive" than other 9/11 'truth activist' group in the U.S.

Where else you can openly talk with a convinced Freemason or a huge Latino-fan of David "Lizard" Icke?

"...she told me that she had been living in her car of about 5 years, despite earning a salary of about $70,000 annually as a nurse, because any landlord anywhere renting a place to her would be contacted by the CIA resulting in her eviction ... She also dated a KKK member, from that I assume she also went along with racist white supremacist activities..."

If you jealous by now, then what about this?:

There are also people in the audience, who claim that they're Undercover-Cops, while others whisper outside about a "perfect anarchy strategy".

Since 911bloglines.com doesn't really support the one or other coup d'etat concept, we're just amazed how bizarre the NY 9/11 'truthling' Department backfired on the audience right now, which almost let Griffin look like an angel compared to the multiple diversions, triggered by Jamieson.

Fact is, a huge part of the ny911truth audience almost don't trust Griffin, Jones and Bowman anymore anyway, but just wanna get entertained with the "movie of the week" and somehow are using the weekly events also a a "therapy", while hoping, that one day this 'mess and nightmare will be over'...

It also apparently still looks, that the audience prefers a puppet leader "pseudo activist" than extreme hangouters like John Albanese "or this troll Weiss", as many pointed out openly in- and outside the church.

Whereelse in this world are you getting presented so many different versions of the "truth"?

to be continued next week...

PS: 911bloglines.com also informed "Charlie", a harmless 9/11-inside job banner holder (every week at Ground Zero, which is now getting poisoned by the Deutsche Bank demolishment), how he ended up in a Photo-Fakery Job by Jonathan Gold, who titled his photo as CB_Brooklyn, who has nothing to with Charlie, who had no clue, that his photo became 'famous' this week at 911blogger.com
Posted by Alex Constantine at Tuesday, December 12, 2006