The Covert War Against Buffy Sainte-Marie 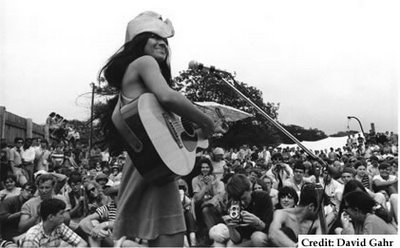 PHOENIX - Nearly two decades after Cree singer and songwriter Buffy Sainte-Marie's song ''Universal Soldier'' was released and shipments of her records mysteriously disappeared, the truth of the censorship and suppression by the U.S. government became public.

Now, in federal court, Charles August Schlund III stated he is a covert operative and supports Sainte-Marie's assertions that the United States took action to suppress rock music because of its role in rallying opposition to the Vietnam War.

Sainte-Marie says she was blacklisted and, along with other American Indians in the Red Power movements, was put out of business in the 1970s.

''I found out 10 years later, in the 1980s, that [President] Lyndon Johnson had been writing letters on White House stationary praising radio stations for suppressing my music,'' Sainte-Marie said in a 1999 interview with
Indian Country Today at Dine' College.

''In the 1970s, not only was the protest movement put out of business, but the Native American movement was attacked,'' Sainte-Marie said.

In an affidavit to the Ninth Circuit Court of Appeals in a Racketeer Influenced and Corrupt Organizations Act lawsuit against President George W. Bush and others, Schlund alleged he has been tortured in his attempts to reveal the truth about the Bush family's manipulation of U.S. voting results and the Drug Enforcement Agency's covert drug supplies to black communities.

Detailing the assassinations of the Kennedys and exposing the ''Don Bolles'' papers, named after the murdered Phoenix news reporter, Schlund said he remains alive today because of FBI protection.

Schlund, who said he previously worked in the covert drug operations in Phoenix, said rock music posed a threat to the United States and played a role in opposition to the Vietnam War.

''This massive CIA and DEA covert operation was being conducted to stop political overtones in the rock n' roll music and to stop foreign influences on Americans caused by the exposure to foreign music. This operation was conducted because the Rockefellers had lost the Vietnam War because of the protest that was in part directly linked with rock n' roll music. In these files, the Rockefellers had needed the natural resources of Vietnam for the expansion of their corporate empire and they blamed the loss of the war in part on rock n' roll music.

''The assassinations started long before Vietnam but the plans to replace rock n' roll with country western music started during the Vietnam War and have continued to the present,'' Schlund stated to the court.

In his federal court affidavits filed in Maricopa County in Arizona, Schlund also stated that singer Buddy Holly, killed in an airplane crash in 1959, was considered a threat to the U.S. government.

Meanwhile, Sainte-Marie said she cut a singular path as she was being censored in the '60s and '70s.

''I usually didn't do what other people did. You didn't find me at peace marches. I was out in Indian country.''

Earlier, a young Bob Dylan heard Sainte-Marie sing in Greenwich Village and recommended she perform at the Gaslight, another hangout of the avant garde. Janis Joplin, Elvis Presley and Tracy Chapman were among those soon recording her lyrics. On the road, she traveled the world and received a medal from Queen Elizabeth II.

During this time, Sainte-Marie was selling more records than ever in Canada and Asia. But in the United States, her records were disappearing. Thousands of people at concerts wanted records. Although the distributor said the records had been shipped, no one seemed to know where they were.

One thing was for sure: They were not on record store shelves.

''I was put out of business in the United States.''

Later, Sainte-Marie discovered the censorship and pressure applied to radio stations by Johnson during the Vietnam era, particularly toward ''Universal Soldier'' during the anti-war movement.

Then, fellow activist and Santee poet John Trudell's wife, mother-in-law and children were burned to death in a mysterious house fire shortly after Trudell burned an American flag in Washington, D.C., Feb. 11, 1979.

But Sainte-Marie continued with her music and efforts with children after becoming a familiar face on ''Sesame Street.'' In the 1990s, from her home in Hawaii, she created the Cradleboard Teaching Project to link American Indian students with other students online around the world.

Remembering the 1970s and Trudell, Sainte-Marie said, ''We just kept chugging on. We kept coming to Indian country. We didn't worry about the fortune and fame because we went with our sincerity, our hearts and with our friends.''

Those years, however, were filled with pain.