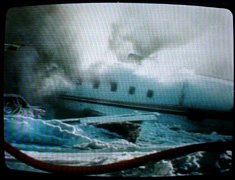 At this point, hard questions come begging. Did executives of ACS orchestrate the Teterboro crash? (it was a "bootleg" charter and only a select few knew about it: Deason, his fellow DDH officers, the nameless Kelso employees on the plane, their three guests. It was a hushed-up flight. This narrows the list of possible suspects, if indeed the plane was sabotaged, and this is the topic of part four.) Complicity might be easier to establish if the identities of the Kelso & Co. officers on that illegal DDH charter were known. Spokespeople for Kelso and Deason's DDH stone-walled reporters. So you begin with secrecy, and that speaks ... maybe volumes.

Deason knows a thing or two about corporate turpitude, but is he capable of murder?

A profile of the ACS founder, published in D (for Dallas) Magazine in 2003, is revealing ... it wasn't illustrated by Goya, but could have been:

"Accounts differ as to what exactly happened aboard the Cartoush II during its pleasure cruise in the Bahamas in September 2001. Darwin Deason denies that he threatened to kill the chef. Others claim he did. 'There certainly was a threat of getting a gun and doing something,' says one person intimately acquainted with the details of the incident. As for the chef, he isn't saying much."

Deason's guests on this voyage included ex-Cowboy punter Mike Saxon, Carter Abercrombie of Dallas, and their wives. The yacht sluiced along the Exuma island chain, the sun was high "when the trouble started." Deason "flew into a rage. 'The guy was definitely having a psychotic episode,' says a source. He began yelling at the chef, Vinny Feola, who locked himself in his quarters. As the standoff dragged on for hours, the ship's captain, Don Hopkins, worked the satellite phone, frantically trying to reach someone back in Dallas who could mollify Deason. Another source says that Deason pulled Saxon and Abercrombie aside and asked them, 'Would you guys be willing to beat the shit out of the chef for me if I asked you to?'"18 (Later, Deason couldn't recall exactly what had incited him, but grumbled that the chef had been "insubordinate.") 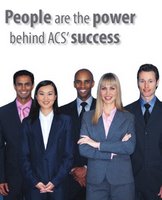 Deason's tirades shrink in comparison to the violence he commits as a CIA contractor. Lest we forget the torture charges, People's Weekly World reported in 2004 that the CIA torture scandal was in fact the ACS torture scandal: "According to the Springfield, Va.-based Federal Times, ACS in 2002" – a year BEFORE Lockheed bought out ACS Government Services – "provided 30 intelligence analysts and 15 to 20 INTERROGATORS for the U.S. Navy’s prison at Guantanamo Bay, Cuba."

The feds and ACS execs attempted to keep a lid on the deal for obvious reasons. At the time, violations of the Geneva Convention didn't have the blessing of congress. They conspired to keep it covert "because the $13.3 million contract states that ACS was to provide technology services to the government, not interrogators and intelligence analysts. According to the Federal Times, the U.S. Southern Command contacted the GSA in October 2002 for help in hiring interrogators for the prison at Guantanamo Bay. The GSA put the contract up for bid, but not as an intelligence-gathering contract." There was a cover story. "Instead, the contract stated that that GSA was seeking information technology workers to assist with a project that the U.S. Department of Interior was overseeing at Fort Huachuca, Ariz."19

It can safely be said that Deason, founder of ACS, a "tightly-knit organization" of spooks and "interrogators," is capable of extreme, second-hand violence. When the CIA needed competent torturers, to whom did it turn? The Special Forces, Sandanista death squads, the School of the Americas? It turned to a scandal-ridden computer company in Dallas. This isn't to say that he was responsible for Teterboro or the Lexington crash, but he was capable of it. 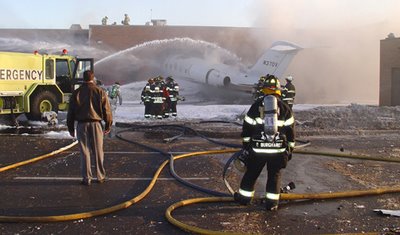 Theoretical problem - you are a a CIA-Republican terrorist and your well-financed cell intends to bring down an airplane to kill off troublesome witnesses. You might hire a "mechanic" to sabotage the fuel line, short-circuit the flight controls, plant a radio-bomb in the cargo hold - but these forms of subterfuge might be detected in the post-crash forensic investigation. You might call a favor from Pakistan's ISI, arrange to have a suicide-bomber on board. But suicide-bombers are mentally erratic and explosive residue is traceable. A reporter for the Wall Street Journal might connect the dots, and you've been wary of the press since last year's gay sex scandal, not to mention the stock manipulation and torture charges hanging over your head.

Destroy the plane without messy explosives and undependable suicide-bombers.

Clue: It only takes a "MOMENT." (Any trained pilot will know the answer immediately.)

The solution will be revealed in part four.