Had he lived, it's certain that Fenton Dawson, a government liaison at ACS, would have been called as a witness in any federal probe into the litany of illegalities that the company had racked up, including stock fraud, domestic spying, torture at "Gitmo," votescam, even a possible role in 9/11, any or all of these excesses ... assuming, of course, investigation and perhaps even renovation of Bush's congressional Mustang Ranch by an incoming Democratic majority ...

My God, you think ... forty-eight unsuspecting passengers on that flight may have been murdered to silence a witness to a multitude of crimes. (At this point, you naively assumed there was only one passenger on board with a security clearance.) The motive was transparent: If anyone knew where the bloody ACS/CIA bones were buried, it was a government point-man.

But shallow media reports weren't much help ... "Dawson graduated from Trigg County High School in 1978 and worked in Lexington for Affiliated Computer Services ... the 46-year old was headed to Washington on business ... " The business that ACS does is grounds for a protracted prison sentence in most civilized countries.

Why precisely did Dawson leave home in the middle of the night to board Flight 5191? Didn't other press reports state that he was headed for an unspecified "conference," or "seminar," in DC? The questions left begging were aggravating. So were the newspaper reports, the fake caring. "' ... ACS is a tightly-knit organization, and we are deeply saddened by the loss of one of our employees ...'" To read the newswire stories, you'd think that Dawson worked for Human Rights Watch. ACS is a vote-rigging, bribing, Islamo-torturing, techno-fascist, criminal business empire with ties to the pyramidal eyes of both parties, a CIA front run by a pair of former Dallas S&L thieves with Total Information Awareness Disorder.

And ruptures of scandal at ACS were sinking the ship:

Illegal lobbying and contract fixing: " ... ACS has donated $12,500 to Republican Gov. Mitch Daniels' campaign committee over the past three years, including the maximum $5,000 each of the past two years. ... " (Daniels subsequently reviewed a billion-dollar ACS contract, a possible conflict-of-interest.7)

The cockroaches were taking over the household.

Was there ever a company on the third planet more corrupt, pound for pound, than this one?

The election theme will recur time and again but you had no idea and stopped to watch the morning news: "President and first lady help ‘Make a Difference...'" A presidential plug. That's all you need at the break of dawn. ‘Today’ host Matt Lauer talks to George and Laura Bush about the rebuilding efforts and their help delivering a Habitat for Humanity house ... "

Well, at least he isn't a full-time pariah - there's still time for charitable pursuits, you tell yourself. Break over, back to work. Bush's supposed altruism and Lauer's nasal voice fade to background babble.

Our ACS data mining on the Internet proves to be a highly-constructive process:

The ABCs of ACS Lawsuits
Filed under: News You Can Actually Use, Actually

"... There’s more information regarding a failed savings-and-loan in which Deason was involved with ... J. Livingston Kosberg. The two also were involved in an ACS spin-off that filed for bankruptcy in Dallas federal court in 2001 and a lawsuit over its demise, which resulted in a cash settlement–with Deason himself paying out $3 million...."

The miscreant's crimes followed him to the computer business: "ACS Adds SEC Investigation To Bribery Charges, Other Woes."9

This thriving computer company and criminalized sectors of government were symbiotic.

Do they still do background checks in the District of Columbia? "Lawrence C. Hale is the Chief Information Security Officer for ACS. He joined the Company in January 2005 from the U.S. Department of Homeland Security (DHS), where he served as deputy director of the National Cyber Security Division's Computer Emergency Readiness Team.... While at the Pentagon, he was a member of the Joint Staff Information Operations Response Cell during a number of cyber events and exercises that helped shape the U.S. government's computer security policy...."10

Our ACS crime-data mining goes on ... the surfeit of ill-gotten profits - but you're looking for specific answers to the death of Fenton Dawson and 48 others. Then you find this - A PRIOR PLANE CRASH: "... ACS recently said it plans to sell a corporate jet it originally purchased from a firm owned by ACS founder and chairman Darwin Deason. The firm, DDH Aviation, has fallen under the scrutiny of the Federal Aviation Administration as part of an investigation into a February 2005 crash at New Jersey's Teterboro Airport that injured 20 people. The jet is owned by DDH ..."11

The downed flight was a "bootleg," a violation of aviation law. The Dallas Business Journal reported in July 2005 that it's "not uncommon for owners of expensive business jets to put their planes to work earning revenue - without benefit of obtaining a Part 135 certificate - by flying others in what the industry calls 'bootleg' charter flights." There are "numerous other variations on that theme that are equally ILLEGAL, according to industry sources ..." Another broken law to throw on the ACS stockpile.

The Dallas Business Journal reported on July 10, 2005 that DDH "declined to comment." Curiously enough, the Federal Aviation Administration, in a July 8th letter to Platinum Jet Management, proposed a fine of $1.86 million, "which in the industry is considered unusually large." But the plane's owner was not touched by the FAA: "Deason's company that owned the aircraft - DDH Operating Ltd. - has not been cited by the FAA for any violations."12 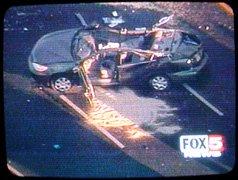 The Teterboro crash was similar to the Lexington disaster: A CL-600 Bombadier (The Comair plane was also a Bombadier) corporate jet bound for Chicago with 12 people on board shot off runway no. 6 during take-off early in the morning, about 7:23 am, colliding with two automobiles on Route 46, leaving two people with serious head trauma, and plowing through a wall at the Strawberry Clothing Warehouse across the highway. The jet skidded across Route 46. Further casualties were prevented only by the red light at Huyler Street, where 20 to 30 westbound vehicles waited for the light to change. The passengers were injured and doused with jet fuel but managed to walk away, despite the fires that erupted at the clothing store.13 (The Teterboro Airport would be in the news again on October 11, 2006 when Yankee pitcher Cory Lidle and Tyler Stanger, his flight instructor, would take flight there in a Cirrus SR20 en route to Tennessee, only to collide fatally 13 minutes later with the Belaire condominium at 524 East 72nd Street.) 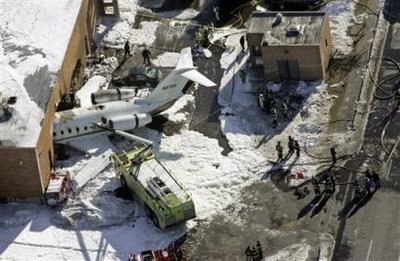 Many in the media assumed, because the temperature was 20 degrees that morning, the cause of the crash was "ice." But according to NTSB staff and wire reports, "Investigators said Thursday [February 3] they have found NO EVIDENCE OF ICE on the wings of a corporate jet that skidded off a runway, crossed a busy highway and slammed into a warehouse. [....] None saw any evidence of ice on the wings or other surfaces of the plane, the National Transportation Safety Board said."14

John Kimberling of Fort Lauderdale, Fla., the pilot, told investigators that the plane's controls "MALFUNCTIONED," forcing him to abort takeoff.15 Now we are looking at the possibility of sabotage.

"Five of the passengers aboard the runaway CL-600 were employees of Kelso & Co., a private-equity investment firm with offices at 320 Park Ave. in Manhattan, and three were business associates, company officials said."

AP reported that day after the accident, "Kelso & Co. DECLINED TO IDENTIFY THE FIVE EMPLOYEES and three guests on board."16 Why? 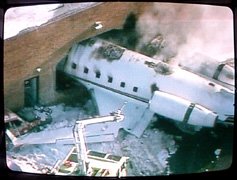 Kelso & Co. is another firm with considerable political influence. In 1999, K&C donated $7,000 to the short-lived Dan Quayle presidential campaign.16 "Quayle surprised everybody in the most positive way with his insights, judgments and ability to net out the issues," Joseph S. Schuchert Jr., chairman of Kelso & Co., explained to Business Week in October 2005.17

Once again, you think, contemporary physicists must be correct in assuming the existence of a quantum dimension parallel to our own. And it was right there in the pages of the media all along, hiding in plain sight ...