Is Goldman Sachs manipulating the gasoline futures market to push prices down before the November elections?

It sure looks that way.

An article appeared this Saturday in the New York Times pointing to some unusual trading by Goldman Sachs in the gasoline futures market. As Raymond Keller, who spotted the article, points out, "They always hide the good stuff in the low circulation Saturday edition."

Here's how the Times reports it:

Politics and worries about oil supplies may have caused gasoline prices to go up at the pump earlier this year, but one big investment bank quietly helped their rapid drop in recent weeks, according to some economists, traders, and analysts.

Goldman Sachs, which runs the largest commodity index, the G.S.C.I., said in early August that it was reducing the index's weighting in gasoline futures significantly. The announcement did not make big headlines, but it has reverberated through the markets in the weeks since and some other investors who had been betting that gasoline wouldrise followed suit on their weightings.

"They started unwinding their positions, and those other longs also rushed to the door at the same time," said Lawrence J. Goldstein, president of the Petroleum Industry Research Foundation. The August announcement by Goldman Sachs caught some traders by surprise.

The firm said in early June that it planned to roll its positions in the harbor contract into another futures contract, the reformulated gasoline blendstock, which is replacing the harbor contract at the end of the year because of changes to laws about gasoline additives.

Later in June, Goldman said it had rolled a third of its gasoline holdings into the reformulated contracts but would make further announcements as to whether the remainder would be rolled over. Then, in August, the bank said it would not roll over any more positions into gasoline and would redistribute the weighting into other petroleum products...

Unleaded gasoline made up 8.72 percent of Goldman's commodity index as of June 30, but it is just 2.3 percent now, representing a sell-off of more than $6 billion in futures contract weighting.

A sell-off of more than $6 billion in gasoline futures contracts? Let's put it this way, a $6 billion trade is not decided on at the lower levels of the firm.

Keller provides some insight into the curious timing of this trade: 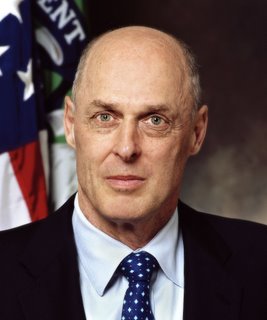 President George W. Bush nominated Henry M. Paulson, Jr. to be the 74th Secretary of the Treasury on June 19, 2006. The United States Senate unanimously confirmed Paulson to the position on June 28, 2006 and he was sworn into office on July 10, 2006.

Before coming to Treasury, Paulson was Chairman and Chief Executive Officer of Goldman Sachs. So what does Goldman do just weeks after Paulson is sworn in as Treasury Secretary? It announces a subtle move that drives down gasoline prices, short-term. Nice move, coming just months before the election.

Now it may be hard to swallow for some that market manipulations go on, but they do at all levels. Penny stock promoters cook up their schemes, and power players have their schemes. In traders' jargon, it's called painting the tape. Indeed, the Washington Post has revealed that the government has formed something that is casually known as the Plunge Protection Team. P.P.T. is supposed to jump in and buy stocks when things are unruly. Ronald Reagan formed the P.P.T. when he signed Executive Order 12631.

It's just another way of painting the tape (Using your tax money, or newly printed Federal Reserve dollars, of course). Goldman is a member of the secretive P.P.T.

But some just don't believe these kinds of manipulations go on. I have had some email discussions in recent days with some pretty sophisticated economists who don't believe Goldman has manipulated the gasoline market. Their argument goes: "I will continue to be an economist and look at the supply and demand issues."

My reply has been, Goldman Sachs understands supply and demand -- and they also understand trading. When you sell-off $6 billion in gasoline futures contracts, you are going to have an impact -- as the New York Times story correctly pointed out. That is an awful lot of supply.

Further, this type of aggressive selling will result in selling by others who will receive margin calls they can't meet. And by trend followers, who will suddenly dump gasoline and other commodities. This is, indeed, exactly what is happening. Goldman Sachs didn't get to be Goldman by not understanding this stuff. Supply and demand can explain this manipulation completely.

My email correspondents also raise a few other points.

They ask, "Why would Goldman Sachs trade this way and lose money?" The answer here is that Goldman doesn't lose money. This is a managed commodity index.

Goldman manages the index, but the actual money put up comes from institutions, hedge funds and other unlucky saps that trusted Goldman to manage the commodity index as a hedge against inflation -- not to bail out of $6 billion in contracts over a few weeks.

The result: Unlucky saps -- Major losses. Goldman -- Zero losses and their man running the Treasury. Which side of this trade would you want to be on?

But, my email correspondents continue on with one more charge: "Are you trying to tell me that refiners are trying to deplete their inventoriesand leave themselves with real supply problems in the future? That does not make sense to me."

In fact, depleting inventories is exactly what refiners would do. If the price of gasoline is plunging in the futures market, they are going to push out the door as much inventory as they can, to make room for the new cheap gasoline they can buy up on the futures market.

Bottom line, Goldman had to know they were going to plunge gasoline operator if there ever was one, and future biographies of him are very likely to note such.

(Thnx to Jim Silver for this.)
Posted by Alex Constantine at Monday, October 23, 2006