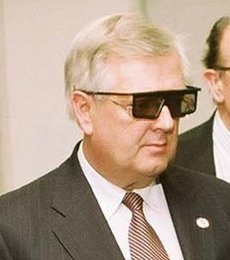 "A close friend calls timing of the leaks 'awful strange.' ..."

The FBI is investigating whether U.S. Rep. Curt Weldon (R., Pa.) used his influence to help his daughter win consulting contracts, sources say, a development that could influence his close race for reelection.

Weldon's campaign denied that an investigation was underway. "Our attorney tells us it is preposterous," said Michael V. Puppio Jr., his campaign manager.

"The allegation in a tight race like this does the damage," Puppio said last night. "You owe a duty to dig a little deeper."

Weldon, who has served 10 terms in Congress, is running neck and neck with retired Navy admiral Joe Sestak.

The investigation, based in Washington, has progressed beyond the preliminary stages, people familiar with the case told The Inquirer yesterday. McClatchy Newspapers broke the story.

FBI spokeswoman Deborah Weierman in Washington declined comment. Weldon's lawyer in Washington, William B. Canfield III, could not be reached at work, at home or by e-mail last night.

Charles Sexton, a political ally of the congressman and a business partner of his daughter, said the timing of the leaks is "awful strange."

"No one has contacted me," he said. "People can look at us all day long. There is no wrongdoing."

Sexton and Karen Weldon, 32, formed a public relations firm, Solutions North America, in 2002, and won $1 million in contracts from two Russian energy firms and a Serbian family with ties to Slobodan Milosevic.

That business dealing was first reported in 2004 by the Los Angeles Times. Sources said the FBI and Justice Department investigation was based on the Times story.

The Inquirer reported in 2004 that Weldon had lobbied federal officials on behalf of one of those firms, Itera, a huge and controversial Russian natural gas company. Weldon also complained to Karl Rove, President Bush's top political adviser, about Itera's treatment by the federal U.S. Trade and Development Agency.

Itera paid $500,000 to Karen Weldon and Sexton's firm. The contract was signed in Sept. 30, 2002, six days after the congressman helped arrange a dinner at the Library of Congress to honor Itera and Igor Makarov, the firm's chief executive officer.

Itera had a controversial past; Western investors in the former Soviet Union contended that the firm's rapid growth was a result of improper business deals.

Weldon was a student of the Soviet Union, and has frequently traveled to Eastern Europe.

The business dealings of Weldon's family and friends are already an issue in the hotly contested Seventh Congressional District race. A recent poll showed Weldon locked in a statistical dead heat with Sestak. The Seventh District covers most of Delaware County and parts of Chester and Montgomery Counties.

However, the Democratic Congressional Campaign Committee, in a direct mailing this week, accused Karen Weldon of getting help from "Daddy."

"In Washington, politics is a family affair, and Curt Weldon sure knew how to steer our tax dollars into his own family's pockets," the flyer said.

Karen Weldon "has not lobbied me or any other congressman," Weldon told The Inquirer's editorial board Thursday. "My kids are allowed to seek employment," he said.

Weldon said he presented the question to the House ethics committee, which declined to pursue it.

The question dogs his campaign. At a recent fund-raising breakfast featuring Laura Bush at Springfield County Club in Delaware County, an enthusiastic Republican crowd greeted Weldon's references to his children with polite silence.

"There is a pattern here," Landau said. "You have this whole K Street mentality," he said of a key Washington address for lobbyist firms.

At the editorial board meeting, Weldon defended his party's handling of ethics issues. "Congressmen have gone to jail," he said.

Every investigation is different, but it is not uncommon for agents probing alleged corruption, drugs and organized crime to spend months, even years, working covertly on a case before the suspects learn that they are under scrutiny.

Sexton, a longtime Delaware County GOP leader, once operated a private security firm that provided security to the Kuwaiti Embassy in Washington.

http://www.swingstateproject.com/
2006/04/pa07_curt_weldo_1.php
Weldon spoke at the coronation of Sun Myung Moon "as humanity's Savior, Messiah, Returning Lord and True Parent", on March 23, 2004. His office originally vehemently denied his attendance, then when he was revealed to be a co-chair organizer of the event claimed that he had intended to attend but could not because of a scheduling conflict; then when a photo surfaced of him speaking at the event while standing next to a lifesize photo of him pinning a Unification Church medal on Moammar Al Qadhafi, stated that he had left immediately after the speech and had no knowledge of what else went on. 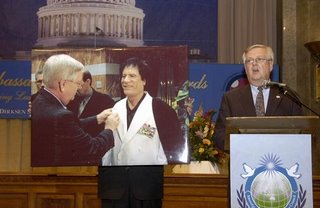 Weldon denied attening Moon's "coronation," but only later fessed up when photos emerged - including another photo of Weldon pinning a medal on that well-known American hero, Col. Muammar Qadafi...
Posted by Alex Constantine at Saturday, October 14, 2006