The "Academy of Science and Death" - Are We the Bastard Children of RAND? 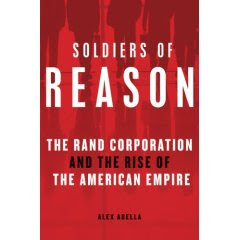 Mr. Abella is the author of the recently published book, Soldiers of Reason: The RAND Corporation and the Rise of the American Empire (Harcourt, May 2008).

Sixty years ago this May an obscure team of defense research scientists quietly incorporated into an organization that would rewrite world history. They kept the cryptic acronym they had given themselves when they were a top Pentagon project —RAND, as in Research and Development—and set up shop in an abandoned newspaper plant by the beach in Santa Monica, California.

Within the span of a few years RAND had become what the Soviet newspaper Pravda dubbed ‘an academy of science and death,’ a place where defense intellectuals could, at their frightful leisure, dream up new ways to make war on America’s enemies. Soon its sway spread beyond the military sphere, extending to national defense, foreign policy, domestic issues and economic theory. Over the past sixty years, the think tank’s influence has been so pervasive that it is no exaggeration to say that all of us who live in the Western world can be called the bastard children of RAND.

RAND, the first think tank, was created to concoct newer and better weapons for the Air Force—specifically, although not exclusively, intercontinental ballistic missiles. The Air Force, steward of the atomic bomb, was the most powerful of all the branches of the American armed forces. It was also the most far seeing, anticipating that after the defeat of the Axis powers, the U.S. would quickly demobilize and the extraordinary combination of industrial brawn and scientific brains that had made possible the Manhattan Project would be lost to history. That was why the commanding general of the U.S. Army Air Forces, Henry Harley “Hap” Arnold, convinced the leading airplane manufacturer in the country, Douglas Aircraft, to host a kind of peacetime Manhattan Project called Project Rand in 1946.

Within a month of its birth, Project RAND came up with a visionary plan to launch an orbiting satellite by spaceship, recommending use of multiple-stage rockets, specifying acceleration rates, and suggesting the use of liquid hydrogen-liquid oxygen as propellants. In effect, RAND originated the concept of satellite reconnaissance, anticipating NASA by more than twelve years. It also advocated interplanetary exploration; for, as the report stated, ‘Whose imagination is not fired by the possibility of voyaging out beyond the limits of our earth, traveling to the Moon, to Venus and Mars?”

Although it started out with only four employees, by 1948 RAND had grown so large it had to detach itself from Douglas Aircraft and become its own independent organization. Subsidized by the Air Force, which imposed no constraints on its fields of inquiry, RAND became the motherland of strategic nuclear policy. Its analysts included such brilliant thinkers as Bernard Brodie, the father of nuclear deterrence; Albert Wohlstetter, a mathematician whose study on nuclear bases may have prevented a devastating Soviet sneak attack; and Herman Khan, who publicized the notion that nuclear war could be fought and won. However, perhaps even more important in the long run, was the pioneering work developed at RAND by a young economist named Kenneth Arrow.

Hired to develop theories on how the Soviet Union might attack the U.S., Arrow pioneered a revolutionary concept of economics that would turn upside down traditional values, subverting long cherished notions of democracy, collective will, religion and patriotism. Called rational choice theory, the doctrine aimed to substitute Marxism with a system that championed the rights of individuals to make their own choices and mistakes. Rational choice created a value system where so-called ‘consumer’s sovereignty’ was all, and where self-interest defined all aspects of human activity.

However, the flip side of rational choice’s strike for individual freedom was its negation of social responsibility. Altruism, religion and patriotism were seen as variations on selfishness. When applied to government, it viewed public officials as egotistical agents; when applied to corporations, the theory exempted them from any obligations other than that owed to shareholders, as though companies existed in a social vacuum. Rational choice, when propounded by economists such as Milton Friedman, provided the theoretical foundation for the deregulation of markets, lifting of trade barriers, and rush to privatization that began under Ronald Reagan and Margaret Thatcher and continues to this day. When you see the so-called shadow banking system meltdown and the subprime financial disaster, when you see the deregulation of finance, oil, tariffs and environmental standards, think of rational choice. When you see Islamic radicals launching jihad against the United States and its allies, think of them as corrections to the self-seeking precepts of rational choice. Then, think of RAND.

The influence of RANDites on domestic and foreign policy has been deep and wide as well. RANDites were intimately involved in the creation of the military-industrial complex. John F. Kennedy may very well have owed the White House to RAND researchers who fed him information about a non-existent “missile gap,” a hallmark of his campaign. Defense Secretary Robert McNamara—who had recruited wholesale from the think tank to reorganize the Pentagon—utilized RAND’s theories of rational warfare to conduct the war in Vietnam. Under President Johnson, RAND’s concept of systems analysis, rebaptized Planning, Programming and Budgeting System, reorganized the workings of the entire federal government, and scrapped old theories of welfare management.

Under Presidents Ford and Carter, long time RAND affiliate Albert Wohlstetter and his followers—among them Paul Wolfowitz, Richard Perle and Donald Rumsfeld—managed to strangle detente, helping to elect Ronald Reagan. And under Reagan and the Bushes père and junior, Wolfowitz, Rumsfeld and Dick Cheney advocated the invasion of Iraq and deposing Saddam Hussein. Wohlstetter even introduced to official circles the man the George W. Bush administration thought would be the George Washington of Iraq, the notorious Ahmed Chalabi. Finally, Operation Freedom, the ill-conceived invasion of Iraq in 2003, was carried out following the precepts of the so-called Revolution in Military Affairs, a transformation of the U.S. armed forces into a swift, lean, high technology juggernaut dreamed up by Wohlstetter and his friend, long time RAND analyst Andrew Marshall.

RAND also left its mark in the field of social policy, changing the way we pay our medical bills—the concept of co-payments arose from a federally subsidized RAND health experiment involving thousands of people around the country for over ten years at a cost of a quarter billion dollars. A RAND engineer presaged the Internet, by coming up with the concept of packet switching. RAND even transformed the American justice system, by carrying out innovative studies that changed the way repeat criminals and even serial killers are handled.

RAND, still secretive, is loathe to admit to its importance; the think tank would rather concentrate on its role as a center for independent analysis in the public sector. But in the final analysis, there is no doubt that RAND has fathered today’s America, and that, in a world that becomes more like America everyday, every one of us is the unacknowledged child of RAND.