Porsche and the Nazis 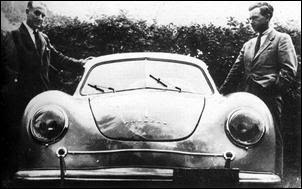 A look at the illustrious history of the Porsche 911.
autospeed.com
By Michael Knowling

... Dr Ferdinand Porsche (born in 1875) began his automotive career working with electric and petrol-electric powered vehicles. During the Second World War, he was set the task of developing a car suitable for the masses – his answer was the VW ‘Beetle’ which was released in 1938. The fundamental concept of the Beetle was sound but manufacturing priorities at the time meant large-scale assembly was put on the back-burner. Only a fraction of the anticipated number was produced but they proved extremely reliable in service.

At the end of the war, Dr Porsche was jailed for his collaboration with the Nazi Government. However, his son – Ferry Porsche - managed to free him by handing the French a large sum of money...

Ferry had already founded the first Porsche factory in Austria and the pair quickly set to work producing a sportscar that employed left-over Beetle components. A rear-engine, rear-drive layout was essential from a parts and marketing point of view. The result was the stunning 1949 Porsche 356 – a vehicle that quickly became popular with wealthy buyers. Like the Beetle, the 1.1 litre flat-four powered 356 was extremely reliable and was subsequently released in cabrio and coupe guises. Engine capacity and various other upgrades were made during the 356 lifespan.

With greater financial resources then available within the company, Porsche released the four-seater 901 in 1963/1964. Interestingly, Peugeot had already claimed copyright on a three-digit model number with a zero in the middle so Porsche was forced to change from 901 to 911! The 901-come-911 employed a new air-cooled 2.0 litre flat-six producing a respectable 96kW. Weighing just 1000kg, the ‘A-series’ 911 gave sparkling on-road performance and a top speed over 200 km/h. ...