May. 07, 2008
BY CAROL ROSENBERG
crosenberg@MiamiHerald.com 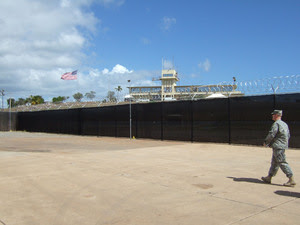 In this file photo, an Army officer walks through the nearly completed Expeditionary Legal Compound, built at a cost of $12 million, with the old war court building, also still in use, behind the green tarp and razor wire.

GUANTANAMO BAY NAVY BASE, Cuba -- The Pentagon took its new $12 million war court complex out for a test run Wednesday with the arraignment of an alleged al Qaeda propagandist -- and the state-of-the-art facility failed.

Observers in the gallery sat behind soundproof glass while the accused, Ali Hamza Bahlul, spoke and gestured to the judge at the start of the proceedings. But no sound was broadcast into the spectators' booth where international media, human rights observers, a Canadian diplomat and FBI agents were sequestered.

The prosecution, the accused and the military judge, Army Col. Peter Brownback II, exchanged words for several moments but the sound was not audible.Military escorts scrambled to halt the proceedings and notify the judge -- even as the accused offered hand-written notes to the court.

Wednesday marked the debut of the Pentagon's showcase ''Expeditionary Legal Complex'' -- designed to try six alleged 9/11 co-conspirators simultaneously. It is a maximum-security, eavesdropping-proof complex that arms security officers with a mute button to silence a defendant -- were he to blurt out a U.S. national security secret, such as where he was interrogated overseas by the CIA, or how.

But Wednesday's trial run took place during more mundane proceedings -- an effort to arraign the 39-year-old Yemeni named Bahlul as an al Qaeda co-conspirator for allegedly serving as Osama bin Laden's media secretary in Afghanistan around the time of the Sept. 11, 2001, attacks.

''This was a technical difficulty; this was not a kill-switch employment issue,'' said Air Force Capt. Andre Kok, a commissions spokesman inside the soundproofed room.

An Army sergeant serving as the court technology specialist was later brought to the observers booth to explain, ''The hard-drive keeps crashing.'' They swapped out the hard drive several times and resumed the proceedings a little over an hour later. Bahlul then launched into a one-hour monologue in Arabic. He said he did not dispute the U.S. allegations against him, pledged his allegiance to bin Laden and rejected the authority of the military court.

''I'm telling you now I will never deny any actions I did alongside bin Laden fighting you and your allies, the Jews,'' he said. ``We will continue our jihad and nothing will stop us.''

Even though the United States toppled Islamic law in its post 9/11 invasion of Afghanistan, he proclaimed, God will have the last word.

"He can sink the whole continent of the United States if he wants.'' Bahlul is accused of three war crimes violations at the first U.S. military tribunals since World War II: conspiracy, providing material support for terror and solicitation to commit murder.

The session was the first since the former war crimes prosecutor, Air Force Col. Morris Davis testified in the original, older courtroom on April 28 that the Pentagon rushed the terror trials to get them going before President Bush leaves office. Problems persisted throughout the session. At the new state-of-the-art press room adjacent to the razor-wire-ringed court complex, a closed-circuit broadcast of the proceedings froze on an image of the military judge midsentence, his mouth agape.

English translation of Bahlul's speech was at times inaudible.

Then, as the charges were read, the power was cut to the courtroom, turning the screen nearly black as an alarm sounded -- and Brownback ordered the reading to continue. Guards surrounded the detainee, unshackled in his seat, just feet from the judge as the proceedings went on.
Throughout it all, Bahlul stonily rejected the proceedings. He alternately said he would boycott them and that he wanted to serve as his own defense counsel, a right granted by Congress in the 2006 Military Commissions Act.
He flatly refused his Pentagon appointed attorney, an Air Force Reserves major, saying he would rather represent himself at trial, silently.

The judge, however, assigned Maj. David Frakt as ''standby counsel'' -- a status that will allow him to assist the court, if the not the detainee, to organize a defense. Bahlul sat through the morning session in his tan prison camp uniform, refusing to participate when others spoke besides himself.
He refused to enter a plea at the arraignment but earlier passed three Arabic language notes to the judge: one declaring his rejection of the court, another declaring his plan to boycott and the last affirming his ``renewal of allegiance to Osama bin Laden.''

Bahlul, who was earlier charged in an abandoned 2006 effort to stage military commissions, is seen as the godfather of the emerging movement to boycott the proceedings by enemy combatants held for as much as six years behind the razor wire at Camp Delta.

Last time, at his 2006 hearing, he fashioned a hand-drawn sign declaring, ''Muquata'a'' -- Arabic for boycott -- and rejected his U.S. military defense counsel.

At times Wednesday, he waved the old boycott sign -- provided to him by the judge. At times he crossed his wrists in a symbol of an ''X'' -- double foul.

Bahlul is accused of being a member of bin Laden's inner circle, of preparing a propaganda video about the suicide bombing of the USS Cole destroyer off the coast of Aden, Yemen, and acting as ''personal secretary and media secretary'' of bin Laden ``in support of al Qaeda. He also allegedly ran al Qaeda data processing and media equipment and at times served as a bin Laden bodyguard armed with a bomb belt, rifle and grenades.