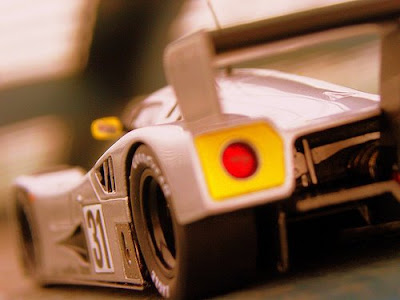 " ... The Nazi influence on the Silver Arrows isn't avoided; nor is it referred to as a background issue. Instead, Reuss treats it as the centrepiece of his book, and subjects the leading players - normally treated with reverence - to questioning which they would have found deeply uncomfortable if they were still alive to hear it. ... "

Review of Hitler's Motor Racing Battles: The Silver Arrows Under The Swastika, by Eberhard Reuss
www.carkeys.co.uk
by David Finlay (13 May 08)

Being a fan of the original Silver Arrows - the astonishingly fast Mercedes-Benz and Auto Union Grand Prix cars of the 1930s - isn't easy. You can marvel at these incredible machines, which went way beyond the imaginations of the rule makers and the resources of the opposition, and admire the brave men (including at least one genius) who raced them, but if you are to understand the subject at all you must also acknowledge that the whole enterprise was devised largely by that bastard Adolf Hitler as a method of promoting his obsecenely evil regime.

I have read a lot of books on the Silver Arrows in the past, and they have always been written from a sporting or personal perspective. In Hitler's Motor Racing Battles, first published in Germany in 2006 and now available in an excellent translation by Angus McGeoch, author Eberhard Reuss could have done the same. He is, after all, one of his country's leading authorities on motorsport, having reported on F1 races for German radio and produced several television documentaries on motor racing history.

But Reuss has in fact approached the business from another angle. The Nazi influence on the Silver Arrows isn't avoided; nor is it referred to as a background issue. Instead, Reuss treats it as the centrepiece of his book, and subjects the leading players - normally treated with reverence - to questioning which they would have found deeply uncomfortable if they were still alive to hear it.

So: the famous driver Hans Stuck, for whom Reuss has barely a good word to say, is described among other things as profiting "constantly and to an astonishing degree from his acquaintance with Adolf Hitler"; the great Mercedes-Benz team manager Alfred Neubauer is more or less accused of fabricating history in his post-War writings (not that he was the only one, but Reuss makes more points about Neubauer in this regard than about anyone else); Manfred von Brauchitsch is suspected of "an inner conviction" of the rightness of the Nazi viewpoint; and the Hitler connections of Ferdinand Porsche, who created the original Auto Union (and whose pre-Nazi career is largely dismissed - the "typical Porsche product" of the 1920s is described as "very sophisticated, very expensive and very unsuccessful"), are regularly emphasised.

Few escape lightly. Reuss seems more sympathetic towards the great Auto Union driver Bernd Rosemeyer, who has always come across as a virtually non-political innocent, than about the majority of his team-mates and rivals, but he makes the point several times that Rosemeyer became a member of the SS a lot earlier than he apparently needed to, and of his own free will rather than because SS status was generally conferred on successful drivers.

"Successful". These men did indeed achieve enormous success. They fought hard to control these immensely fast cars (a Grand Prix Mercedes or Auto Union could reach 200mph in race trim and over 250mph when converted for record-breaking, and had such feeble brakes that it took them a very long time to slow down again). And they were rewarded hugely. In the most dramatic case, Reuss notes that the working-class Hermann Lang (who became a Mercedes works driver to the horror of his higher-born colleagues) earned 15 times more in 1937 than he had in 1936, and that his income had increased by a further 50% by 1939.

But it wasn't just their driving ability that was rewarded. What they were doing - whether they ignored the fact or were secretly proud of it - was promoting Hitler and the Nazis. I fell in love with Auto Unions on the strength of seeing one picture in an old book of my father's when I was eight years old; I can only imagine the effect on thousands, perhaps millions of young boys as they were bombarded with news of Germany's motor racing triumph as it happened, a process which was partly intended to prepare them for war as the boundaries between motorsport and fighting gradually became blurred.

With whatever amount of persuasion, the drivers were often explicit in their acknowledgement of the Nazi involvement. The great Mercedes driver Rudolf Caracciola was quoted in 1938 as saying that "the unique successes of these new racing cars in the past four years are a victorious symbol of our Führer's achievement in rebuilding the nation. Let us thank him for it on 10 April [the day of the elections for the Greater German Reichstag in 1939] with a heartfelt yes !"

Reuss prints that quote, and another from Lang's memoirs published in 1943 - four years into the War - in which Lang says that "our Führer Adolf Hitler has helped the German nation to achieve acceptance in its constant striving for recognition and equal rights." Reuss then asks, "Even in wartime, was a prominent racing driver compelled to have stuff like that published under his name?"

He answers himself with a "no", but I can't help thinking that the answer could well be "yes". In Germany at that time, you trifled with your health if you argued with the Nazis - and Reuss actually backs that up later in the book with his story of how, in 1939, Auto Union - the forerunner of today's Audi - did not want to employ Hans Stuck to drive in the Swiss Grand Prix but was obliged to do so regardless, "taking account of the wish expressed" by Heinrich Himmler.

There is another sense in which I feel the drivers did not have a choice. They were talented and ambitious, and they put themselves in the service of the source of the money that enabled them to express their talent and fulfil their ambition. It had happened before, and it has been happening ever since. It is what racing drivers do.

But at the same time I can't help suspecting that I'm taking the easy way out here - viewing the subject through Rosemeyer-tinted spectacles, as it were.

Working towards your lifelong ambition isn't necessarily a bad thing in itself, but how can it be acceptable to do this by helping to promote (as they must have known they were doing) such a terrible regime (as they must have known it was)? With hindsight, after so many decades in which Hitler and the Nazis have been so widely accepted as an embodiment of evil, it's easy to criticise the Silver Arrows drivers, but even if you try to put yourself in their position, how easy is it to forgive them?

I can't answer these questions, and I don't think that Eberhard Reuss can either, since despite many hints about what he believes there is no definitive conclusion to his book. And perhaps, given the multi-sided nature of the whole Silver Arrows story, that's as it should be.

I was saddened and unsettled by almost every page of this fascinating and important book, so I can't say I enjoyed reading it. But I am very glad that I did - and will do again - and I am grateful to Eberhard Reuss for having written it.