BERLIN – Over the years, Bayerische Motoren Werke AG (BMW), the German automobile manufacturer, has become a symbol of quality, prestige, and social status. As it turns out, the company has been hiding a dark secret for decades.

The Quandt family - Germany’s richest– is a major shareholder of the leading German automobile manufacturer.

It made its fortune during the Second World War through the Nazi war machine, profiting from the forced labor of thousands at concentration camps.

According to an investigative report that premiered at the Hamburg Film Festival on Sunday, the family managed to escape punishment after the war, and continued building its empire – an empire that has left its members billionaires many times over. 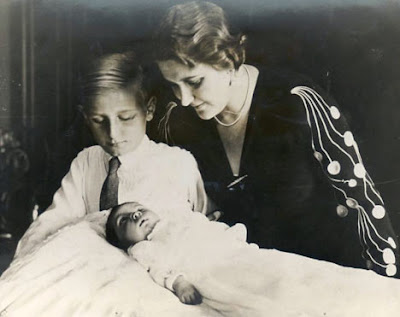 [Hitler connections: Baby Helga, daughter of Josef Goebbels with Mrs. Goebbels who was formerly Mrs. Magda Quandt, with her son from her first marriage]

The investigative report, which took five years in the making, reveals for the first time the close ties between members of the Quandt family and the Nazi regime’s leadership.

Günther Quandt, the empire’s founder, was the first husband of Magda Ritschel, who later married Joseph Goebbels, a German politician and one of Adolf Hitler’s closest associates.

According to the report, Quandt’s first son with Magda was raised by the Goebbels, and became one of the managers of his father’s business after the war.

The report also revealed a series of incriminating documents found collecting dust in various archives throughout Germany, which prove the extent of cooperation between the Quandts and the Nazis.

Makers of the investigative report also located survivors of the camps used by the family during World War II, who testified to the horrible conditions they were forced to work under.

The family refused to cooperate with reporters who participated in the investigation.

The Quandt’s have previously denied allegations that they cooperated with the Nazis, and in fact, for years portrayed themselves as victims of the Third Reich.

When the German Forced Labour Compensation Program was established, the family made no contribution, claiming it had nothing to do with the issue.

The owners of the BMW car empire built their £17 billion fortune on the back of slave labour under the Nazis, it has been claimed.

A TV documentary reveals that the Quandt family, controllers of BMW, profited from workers shipped in from concentration camps.

Unlike many German firms whose links to the Nazis have been made public, BMW has resisted investigating its wartime practices.

But the documentary - The Silence of the Quandts - claims that BMW industrialist Gunther Quandt operated a plant which used labourers from the Neugamme concentration camp.

"It was dangerous work, watched over by the SS and many workers died," said the documentary.

Labourer Takis Mylopoulos, who worked at the Afa plant, making batteries for BMW, said: "It was worse than slave labour. We were treated terribly, had to drink water from the toilets. We were also whipped."

Quandt, who had a 30 per cent stake in BMW, was held briefly post-war, but declared to be a party member who "went along" with things rather than an ardent Nazi, and so was not charged.

Benjamin Ferenz, a prosecutor at the Nuremberg Trials, said: "If these facts had been laid before the courts, Quandt would have been accused exactly the same as Krupp and I.G. Farben."

Today, the Quandt family have a fortune estimated at £17 billion.

Many German corporations - car maker VW and media giant Bertelsmann - have investigated their working practices under the Nazis.

VW, for instance, found out that there was a "dying room" at its main plant where women slave labourers were forced to leave their newborns to expire.

While it is well known that major industrial concerns like BMW had to ingratiate themselves with the regime, BMW has never researched into its Nazi past and these facts have not been made public before.

"The Silence of the Quandts" drew a massive audience when it was screened on Sunday night without pre-publicity.

"We were surprised by the film," said a Quandt family spokesman, adding nothing more.
Posted by Alex Constantine at Thursday, May 29, 2008