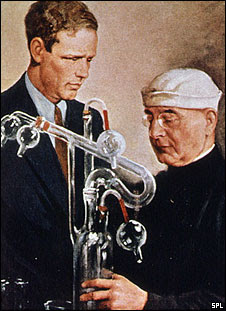 Charles Lindbergh and Alexis Carrel, with their perfusion pump

Flying had a strange effect on the great aviation pioneer Charles Lindbergh, leading him to team up with a French surgeon and embark on a quest for ever-lasting life... for a chosen few.

What do you know about Charles Lindbergh?

You probably know he was an American aviator. He achieved overnight world stardom when he became the first person to fly non-stop across the Atlantic, solo, in 1927.

You might also know that Lindbergh was strongly opposed to American involvement in World War II - until Pearl Harbor, after which he volunteered to fly combat missions in the Pacific.

And you might know that in later life he became a prolific author, an explorer and an environmentalist.

But did you know that he was also a machine-obsessed inventor, who entered into a macabre alliance with a French-born surgeon to try to achieve immortality?

Forget aviation hero. On the side, Lindbergh was a Dr Frankenstein figure, who used his mechanical genius to explore the possibility of conquering death - but only for the select few who were considered "worthy" of living forever.

"Beating death was something he thought about his entire life", says David M Friedman, American author of the new book The Immortalists. "Even as a small child, he couldn't accept that people had to die. He would ask: 'Why do you have to die to get to heaven?'"

Friedman's The Immortalists relates the untold story of Lindbergh's frequently bizarre efforts to cheat death by creating machines that might sustain human life.

In the 1930s, after his historic flight over the Atlantic, Lindbergh hooked up with Alexis Carrel, a brilliant surgeon born in France but who worked in a laboratory at the Rockefeller Institute in Manhattan. Carrel - who was a mystic as well as a scientist - had already won a Nobel Prize for his pioneering work on the transplantation of blood vessels. But his real dream was a future in which the human body would become, in Friedman's words, "a machine with constantly reparable or replaceable parts".

This is where Lindbergh entered the frame. Carrel hoped that his own scientific nous combined with Lindbergh's machine-making proficiency (Lindbergh had, after all, already helped design a plane that flew non-stop to Paris) would make his fantasy about immortal machine-enabled human beings a reality.

"Both of their needs were met in this rather strange relationship", says Friedman. "Carrel benefited from Lindbergh's mechanical genius and inventiveness, and for Lindbergh - well, Carrel became the most important person in his life, effectively steering the way he viewed the world and the people who lived in it."

At the Rockefeller lab, Lindbergh and Carrel - almost like a real-life Jekyll and Hyde double act - made some extraordinary breakthroughs. Lindbergh created something that Carrel's team had singularly failed to: a perfusion pump that could keep a human organ alive outside of the body. It was called the "Model T" pump. In later years, Lindbergh's pump was further developed by others, eventually leading to the construction of the first heart-lung machine.

"Some people, even academics and science students, are still shocked when they hear about the contribution that the aviator Lindbergh made to developing life-saving cardiac machinery," says Friedman.

As a pilot, he felt he had escaped the chains of mortality - he had had a god-like experience.

But there was a serious downside to what Friedman refers to as Lindbergh and Carrel's "daring quest" to live forever.

Carrel was a eugenicist with fascistic leanings. He believed the world was split into superior and inferior beings, and hoped that science would allow the superior - which included himself and Lindbergh, of course - to dominate and eventually weed out the inferiors.

He thought the planet was "encumbered" with people who "should be dead", including "the weak, the diseased, and the fools". Something like Lindbergh's pump was not intended to help the many, but the few.

Lindbergh himself sympathised with the Nazis.

"I wouldn't say Lindbergh was the philosophical partner of Himmler or Hitler," says Friedman. "But yes, he certainly admired the order, science and technology of Nazi Germany - and the idea of creating an ethnically pure race."

Friedman says Lindbergh considered himself a "superior being". "Let's not forget that, as a pilot, he felt he had escaped the chains of mortality. He had had a god-like experience. He flew amongst the clouds, often in a cockpit that was open to the elements. Flying was such a rare experience back then. In taking to the skies, he did something humans have dreamt of for centuries. So it is perhaps not surprising that he ended up trying to play god in a laboratory."

Even contemporary transhumanists - the name given to those who want to extend human longevity and possibly conquer death - are surprised to hear about Lindbergh's contribution to machine-assisted life.

Alexis Carrel's quest for ever-lasting life goes on, but is now more 'ethical'
"I never knew that", says Nick Bostrom, director of the Future of Humanity Institute at Oxford University and President of the World Transhumanism Association.

For Bostrom and his colleagues, aware that some people think transhumanism is the same thing as eugenics, the key today is the "ethical use of technology to extend human capabilities".

"There are many ways we have used science and technology effectively to 'cheat death'", says Bostrom, "whether it's through antibiotics, organ transplantation, or even lightning rods to deflect electrical currents from the sky. You know, when they were first invented some people said it was 'playing god' to try to deal with lightning in this way."

Bostrom believes that reversing the ageing process, or at least using stem cell therapy to slow down the negative effects of ageing, should be "the next frontier" in medical science.

"But it should be for the benefit of everyone and it should be done ethically - somewhat different to what Lindbergh got up to", he argues.

Stuart Derbyshire, a leading expert in pain based at the University of Birmingham, says it is certainly "desirable to live a long and healthy life" - but from Lindbergh's experiments to today's ethical question for longevity, he says there is also a "troubling" side to the "quest to live forever".

"Any life, long or short, is only worthwhile if it is lived towards some purpose. The zealous pursuit of health and longevity can too easily become a substitute for real purpose.

"Health itself becomes a quasi-religious crusade against the old sins of the flesh - gluttony, sloth, lust - with all the attendant odious associations of physical impairment or disease with moral turpitude or a bad life." His implication is clear - while Lindbergh and Carrel's quest had all the hallmarks of Nazi-promoted eugenics, it's perhaps impossible to separate the pursuit of ever-lasting life with notions of supremacy.

The Immortalists by David M Friedman is published in the UK by JR Books on 16 June.