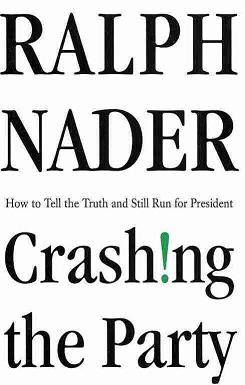 OAKLAND - Independent candidate for President Ralph Nader described the current government and economic system of the United States as "corporate fascism" at a campaign event held in Berkeley on May 12.

"We're living in a country whose democracy is beyond the breaking point. The extent of corporate control has developed into corporate fascism," declared Nader. "We don't have a capitalist economic system - it's corporate fascism. Every major tenet of capitalism is violated by corporate power," said Nader. Only small businesses still practice capitalism, according to Nader.

Nader explained that major corporations buy politicians and write the laws through their lobbyists, thus owning the Capitol. They receive billions in government subsidies and hand-outs, but 68 percent of corporations pay no federal income tax, according to Nader.

Corporate fascism not only rules U. S. politics and the economy, but also other aspects of life including the way people think, said Nader. "We grow up corporate with commercialized childhoods. We get a corporate education."

Nader has spent his life fighting corporate power, so his anti-corporate theme is not new, having been at the center of his three previous campaigns for President. However, he clearly thinks things have gotten much worse and that the accumulation of corporate power has gone beyond the tipping point.

"We used to be able to challenge corporate influence in Washington, but they have so much power now that we can't. The corporations are laughing at us. They're daring us to try to take away their power," said Nader.

The choice between a Democrat and a Republican is to Nader a "choice between horrible and terrible." He warned against voting for a candidate because they're not as bad as the other. "If you have a low expectation level of politicians, then they're going to oblige you," said Nader.

Nader warned against continued complacency. "What's wrong with us? Are we the biggest suckers? Are we super-suckers?" He exhorted his audience at the Berkeley Fellowship of Unitarian-Universalists to find their "constructive anger."

He doesn't think it's too late to turn things around, but it will require, "people to break from corporate thinking." Nader called on Americans to reach out to each other, get active and organized, and to make demands for what they need and want.

Nader called on people to become "tough citizens" who are "resilient, informed, and able to bounce back."

He described his campaign for President as an effort to "restore democracy" and to build "resistance and enlightenment.". Nader and his running mate, Matt Gonzalez, former President of the San Francisco Board of Supervisors, are collecting signatures so that they can appear on the ballot in all fifty states. Information about the campaign is available at www.votenader.org .

Jonathan Nack has been a journalist and activist since 1984. He resides in Oakland, California.