"I said to Klaus Barbie: I want people to see your human side" 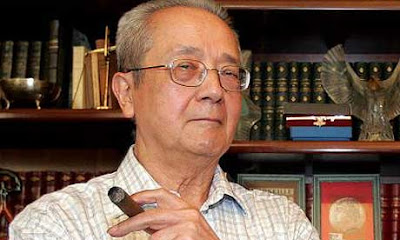 French lawyer Jacques Vergès has represented some of the 20th century's most notorious criminals. Now, as his own mysterious past comes under scrutiny in a new documentary, he explains to Angelique Chrisafis why he defended them.

Angelique Chrisafis
The Guardian
May 15 2008

The lawyer Jacques Vergès sits back in his Paris office, lights a Cuban cigar and recalls the highlights of his notorious client list. He defended the Nazi war criminal Klaus Barbie, advised the Serbian leader Slobodan Milosevic and acted for the terrorist mastermind Carlos the Jackal. A Buddha head given to him by friends in Cambodia's lethal Khmer Rouge regime watches over him from his desk. Asked if he would have defended Hitler, he smiles, puffs, and says: "I'd even defend George Bush. But only if he pleads guilty."

Vergès is France's most controversial lawyer, an enigmatic 83-year-old charmer, and a walking Who's Who of 50 years of terrorism and armed resistance. He fell in love with women bombers he defended, rubbed shoulders with everyone from Chairman Mao to Che Guevara and Pol Pot. The French secret service tried to kill him in the 1950s. In the 1970s, he vanished for eight years, adding another layer of mystique to his status as a celebrity "devil's advocate".

No one has ever established the extent to which Vergès did, or did not, cross the line into the shadowy world of his clients and their armed struggles. He began his career as an impassioned leftwing anti-colonialist, defending the bombers of the Algerian fight for independence, then later went on to act for Barbie, the "Butcher of Lyon" as well as questionable African figures such as the Togo strongman Gnassingbé Eyadéma. He likens his job to that of Shakespeare: presenting characters on the courtroom stage and making the public empathise with and understand them, no matter what their crimes were.

But the most fascinating character is himself. In France's most eagerly awaited documentary of the year, Terror's Advocate, the director Barbet Schroeder has put Vergès himself in the dock, tracing the light and dark aspects of his career. Vergès's life is the story of the past half-century of terrorism - from cafe bombings to plane hijackings and hostage-takings - and the role of lawyers in the courtroom dramas that followed. It won a Directors Guild of America award and a César, France's equivalent of the Oscar. The film's release in Britain tomorrow is timely, given that Vergès is currently defending the former Khmer Rouge head of state Khieu Samphan - he argues that the deaths of up to 2 million Cambodians in the 1970s did not amount to genocide. He was also briefly hired to represent Saddam Hussein, and is about to start defending the former Iraqi vice-president, Tariq Aziz.

In a rare interview in Vergès's Paris mansion - he lives above an office filled with chessboards, tapestries, books and exotic artefacts given to him by clients - the lawyer describes how he would creep into Paris screenings of the film and sit at the back to see how people reacted. He would be delighted when people recognised him and warmly shook his hand at the end. The film's impressive French box office was partly due to the intriguing notion the Vergès has defended an array of indefensible "monsters". But he hates the term. In 1987, when defending Barbie, who was later convicted on 341 charges of crimes against humanity, he wanted to make the court see his human side.

"When you treat the accused as a monster, you give up trying to understand what happened. And if you don't try to understand what happened, you deprive yourself of any reflection on how to stop that thing happening elsewhere. If the Americans had reflected on the moral defeat that torture represented for the French army in Algeria, what has gone on at Abu Ghraib would certainly never have happened."

Vergès says he has a "split personality", pulled between the developing world and Europe. He was born in Thailand to a French doctor and a Vietnamese mother. His father had to quit his position as French consul because interracial marriages were not allowed by the French authorities, and Vergès grew up on the Indian Ocean island of Réunion, where his mother died when he was three. But she bequeathed him a fierce sense of the anti-colonial struggle, a sense of outrage at non-white people having to step aside in the street.

At 17, he volunteered to serve in De Gaulle's Free French forces, earning a reputation as a hero. Later, at the Sorbonne, he briefly joined the communist party and was a leader in the anti-colonial student movement. His student acquaintances included Pol Pot, later to become head of the Khmer Rouge. "He was like the other Khmer students: very discreet, very polite, very charming, very courteous. That's all I can say."

In 1957, Vergès made his name defending the FLN, Algeria's National Liberation Front independence fighters, who were struggling against French colonialism, and whose bombs - planted in cafes and bars - set the tone for world terrorism for the following 50 years. He fell in love with his client Djamila Bouhired, the beautiful bomber and revolutionary icon who was tortured and sentenced to death. She was finally freed and he married her. He developed his trademark technique of challenging the legitimacy of the court and turning the trial into a debate on the injustice of colonialism and judges' hypocrisy. He would go on to defend members of the Popular Front for the Liberation of Palestine and Germany's Red Army Faction.

Then, in 1970, he did a vanishing act. He told his wife and children he was going to Spain and wasn't seen for eight years until he turned up in Paris and resumed his law practice in 1979 as if nothing had happened. The film examines some of the theories around the disappearance Vergès calls "my holidays". Was he in Cambodia advising Pol Pot? Training as a KGB spy and going in and out of East Germany? Or was he a Chinese agent in Cambodia, where he ended up in prison? One theory is that he was in Palestinian training camps in Libya, Yemen or Jordan. Schroeder establishes that he was spotted back in Paris several times during the time of his disappearance, but Vergès tells me he can't talk about his "holidays". Does it surprise him that no one has ever worked it out? "That is the biggest mystery and it shows the failure of our special services." Unless you were working for them? "They and I would have to be extremely good in that case, considering that when I defended the FLN [in Algeria], they almost assassinated me."

In 1982, Vergès defended Magdalena Kopp of Germany's Red Army Faction, who had been caught in Paris with explosives. She was the girlfriend of Carlos the Jackal - Ilich Ramírez Sánchez, the Venezuelan who made career out of bombings, kidnappings and hijackings. Schroeder's documentary traces the love story between Vergès and Kopp, whom he visited in prison every week. Vergès tells me: "There was a profound friendship, and a friendship between a man and a woman always has something special. But you must understand where that friendship came from. She was in prison for four years, I visited every week, because she didn't speak French. And in a woman's prison, there is much less respect for politics than in men's prisons, where gangsters respect terrorists. I was her only breath of fresh air for four years - that creates a very strong link, beyond whatever liaison."

Once freed, Kopp returned to Carlos, who in 1994 was kidnapped in Sudan by French secret agents and sent to prison for life. Vergès says he was Carlos's lawyer for five months before they fell out over his defence. "Between me and Carlos there's not a lot of friendship."

Vergès insists no one has ever proved any of the supposed shady links he had to terrorist groups he defended. He denies that he has given way to greed and acting for corrupt African figures. He denies he is interested in money, saying he doesn't own his home and his only indulgences are Cuban cigars and linen suits.

A lawyer must be credible and stay true to himself, he says. "If Klaus Barbie had asked me to plead the superiority of the Aryan race I would have said no, because I would have been renouncing myself." His moral code is a question of the "elementary reflexes of human dignity and honour". He says: "There are things that a man of honour can't do. When I'm given a letter, I'm not going to open it."

Vergès maintains that he is a celebrity and not a pariah in France because the French admire anyone who kicks against the establishment. "Whoever is a lone man pitted against the rest, the French like that."

Schroeder, who also made the acclaimed Hollywood films Barfly, Single White Female and the Claus von Bulow epic Reversal of Fortune, has long been intrigued by secrets, charm and the powers of persuasion. But in this film, he has gone back to his roots, and the style of his acclaimed 1974 documentary about the Ugandan dictator Idi Amin. He interviewed Vergès and his clients and friends at length and describes the film as a "political thriller". But he found Vergès far more "complex and difficult" than Idi Amin. "He's very clever, a master manipulator ... He was a mystery to me. It wasn't the people he defended, it was the fact that he started out very courageous, he started as a great idealist and he changed." Did Vergès tell him the truth? "No," he says.

http://www.guardian.co.uk/world/2008/may/15/france.internationalcrime
Posted by Alex Constantine at Wednesday, May 21, 2008