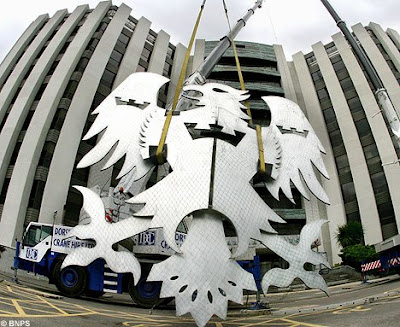 The evil that men do lives on
Source: Guardian Unlimited

French director Nicolas Klotz and his writing partner Elizabeth Perceval were only names to me until last week when I saw Heartbeat Detector (aka La Question humaine), adapted from a novel by François Emmanuel, and the concluding film in an informal trilogy, the first two parts of which, La Blessure and Paria, have yet to be shown in this country. It is a nightmarish film, intense and genuinely disturbing, that brings together much that is in the international cinematic air at the moment: conspiracy thrillers about underground organisations out of control; paranoid movies like Hidden that play on personal guilt arising from public crimes; films about the demoralising effects of unemployment; studies of people cracking up under the pressure of corporate corruption. The last two groups are emblematically brought together by Tom Wilkinson playing the Sheffield foreman in The Full Monty, who cannot tell his wife he's being made redundant ...

Heartbeat Detector begins with a long tracking shot of a series of numbers in the thousands stencilled on the wall of a dark, subterranean place. It's a puzzling image. Are we getting hints of sinister buried secrets relating to some ordered process or could this be merely a basement car park? The action then unfolds in a stylised, at times surreal manner in the corridors of power at the gleaming headquarters of a French subsidiary of a German petrochemical company, suggestively called SC Farb.

These offices adjoin a busy factory pumping smoke and flames into the sky, though we never see the workers. The central character and narrator is Simon Kessler (Mathieu Amalric), a shrewd young French psychologist employed to advise on executive hiring and firing, as well as to stage seminars that involving role playing and organise recreational activities. He's a cool character, a chain smoker, a drinker, a womaniser, who takes pride in having recently superintended the downsizing of the company from 2,500 to 1,200.

The company's German president, Karl Rose (Jean-Pierre Kalfon), respecting Kessler's loyalty and professional skills, gives him the secret task of observing and reporting on Mathias Jüst (Michael Lonsdale), the chief executive officer, an engineer by training, who appears to be going haywire. He takes arbitrary decisions, neglects his work, and allegedly harasses female colleagues. The shrink's investigations involve him in a cat-and-mouse game with the troubled Jüst. Are the CEO's problems personal (still grieving over the death of a child) or something to do with his own or the company's past?

Accusations and counter-accusations arise bringing up the Holocaust and Farb's involvement in it. Was Jüst's father implicated in the Final Solution? Did Karl Rose change his name from Krauss and was he a product of the Lebensborn, the grotesque eugenic scheme dreamt up by Hitler and Himmler to create a master race through maternity homes where carefully selected SS soldiers would mate with perfect Aryan women?

The more Kessler inquires, the more troubled he gets and his own perception of reality becomes problematic. As a cover for his inquiries, he suggests re-forming a string quartet in which Jüst played with other employees. This helps tip his quarry over the edge into madness and the notion of the quartet evokes images of the Jewish prisoners who performed for the guards at Auschwitz. A member of the quartet turns out to be Arie Neumann (Lou Castel), a Jewish musician and disgruntled former employee of Farb. Neumann has been sending anonymous letters to Jüst about Farb's company policy and the Holocaust and there is a devastating confrontation when Kessler tracks him down to Le Mans.

As the film proceeds, it turns increasingly dense and at times mystifying. But one thing becomes clear, which is that there is a continuity between the activities of the German company in the Nazi era and the way such international corporations work today. There is no longer any concern for human beings. They are creatures to be exploited and ruthlessly cast aside in the interest of profit and rationalisation. They are 'things', 'units'. Euphemisms and technical jargon protect people from the consequences of their actions.

Klotz and Perceval take an immense moral and political leap in this picture, but you don't fully have to accept what they say to find their film provocative. It is a warning of what happens when men and women as individuals cease to be at the heart of social thinking. The acting is excellent and Amalric confirms his position as the screen's most convincing intellectual. In a succession of films over a dozen years, he has embodied the social anxieties, divided nature and inner turmoil of the thinking man in our times, in movies as different as The Diving Bell and the Butterfly and the delightful 25-minute comedy The Interview (winner of the 1998 Palme'd'Or for best short film), in which he plays a deadly serious film critic crossing the Channel to conduct an in-depth interview with Ava Gardner in London, only to find she'll only speak to him via the intercom and can remember little about her life. Amalric is soon to be the latest Bond villain, following in the footsteps of his Heartbeat Detector co-star Lonsdale, who played Hugo Drax in Moonraker.