EUROPE: Far Right on the March 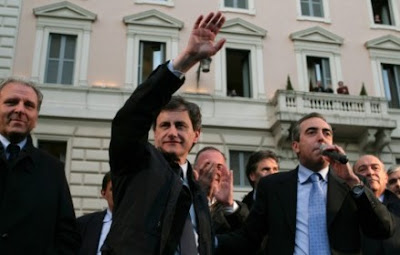 Xenophobia seems to be part and parcel of modern Italian politics
The publication of the British National Party's 10,000-strong membership list has once again shone the spotlight on the far right in the UK.

But it is in Europe that such organisations are causing gravest concern. A far-right Czech group tried to attack a Roma camp on Monday and Austria's two far-right groups together won almost a third of the vote in September's national election. And then there's Italy.

In April, the country gave the far-right party Lega Nord (the Northern League) an electoral shot in the arm. Romans chose a mayor who had once led a Neo-Fascist youth movement.

Immigrants are routinely scapegoated for rising crime - incorrectly blamed on a recent influx of people from the former Yugoslavia and northern Africa.

This fear is increased as “the media amplifies crime when there are immigrants involved,” says Anna Bull, professor of Italian history at the University of Bath.

The government has been slow to respond to the changing ethnic make-up of the country. “There has been little discussion of multiculturalism” says her colleague, Professor Roger Eatwell, who adds and xenophobia is still rampant.

The Italian discrimination against the Roma people has a growing notoriety not least because it often continues with the backing, tacit or otherwise, of the government and legal system.

Prime Minister Silvio Berlusconi, whose campaign promised a clampdown on "Roma, clandestine immigrants and criminals," supports the mandatory fingerprinting of all Roma, including minors.

In March Italy's highest court found a mayor who believed that "all Gypsies were thieves" not guilty of racial discrimination. Many Roma camps outside of Rome and Naples have been razed.

Italy's state-sanctioned xenophobia – over half of Italians would like to see the Romas expelled from the country - was demonstrated by shocking photographs of Italians sunbathing just a few feet from the dead bodies of two drowned Roma girls.

Rome's far right mayor Gianni Alemanno made a promise to crack down on immigrants central to his campaign. At his inauguration, skinheads reportedly chanted “Duce. Duce,” in a direct link to Italy's dictator Fascist dictator Mussolini.

Upon entering office Alemanno instituted a 'Pact for Rome' which included the following directives: “Immediately activate procedure for the expulsion of 20,000 nomads and immigrants who have broken the law in Rome” and “Closure of illegal nomad camps, rigorous and effective checks on legal ones and their progressive elimination.” He also has said that it would be simplistic to consider fascism an "absolute evil".

Meanwhile, the Lega Nord, is playing its part. One of their leaders, Roberto Maroni - who serves as the interior minister - authored the Roma fingerprinting proposal and last week the party announced a plan to place a two-year ban on immigration.

The lack of long-established parties may make Italy more susceptible to extreme parties. “In most countries there are the same parties as there were 20, 30, 40 years ago. In Italy there are completely new parties since the 1990s” says Eatwell. “Personal identity with parties is very weak which leaves the country open to the possibility of radical change.”

The National Alliance party is generally acknowledged to be in position to take power after Berlusconi and his Forza Italia party. The Alliance party is the successor to the Italian Social Movement which grew out of Mussolini's fascist party.

The party has “made great strides in renouncing and denouncing fascism and the leader Gianfranco Fini has made the party more mainstream, centre-right though there are still elements of neo-fascists,” said Bull. Any moderate sentiments are generally absent in the rank and file members however.

The party differs from the Lega Nord in significant ways but they are united over their stance on immigration leading to speculation that the two parties could form a coalition.

Italian President Giorgio Napolitano spoke out last week against the anti-immigration sentiments embodied by the increasingly powerful extreme right. He said, "We need a climate of openness and appreciation towards foreigners who are Italian.” Maybe this indicates a turning point away from the support of the anti-immigrant far-right and instead towards the embrace of multiculturalism in Italy.

There doesn't seem to be much evidence of it elsewhere sadly.