Also see: "U.S. Senate Investigation Into the Bank for Credit and Commerce International"

"Mr. Kassar would get a 'pass' by the US on his narcotics trafficking in the region ..." 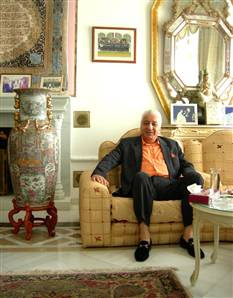 ... A lovely snippet on the ability of Mr. Kassar to influence folks that should be arresting him is described with this:

The primary example here is Al Kassar who, for example, closed a deal with the French government. While being sentenced to eight years in Paris, he negotiated without any problem with the French authorities and several opportunities to arrest Al Kassar were ignored.

So much for this 'rule of law' concept! Yes he could, indeed, influence people and he could help the French... if they would just ship some arms to Iran. Such a good deal! How could the CIA pass that up? Well, from what we see in the Iran/Contra business, it didn't.

Thus comes in Ollie North, Richard Secord and a lively crew of folks looking to purloin some weapons, get some cash, free some hostages and get arms to the Contras all in a few easy steps. They would set up a business they called the 'Enterprise' and it would work with an international arms dealer who had a direct line to Iran: Mr. Monzer al-Kassar. Mr. Kassar had moved offices to Poland so as to avail himself of Soviet bloc arms, which were a bit cheaper and easier to sell than Western ones. So the 'Enterprise' would look to get a ship to do the go between work, owned by a Portugese company: Defex.

So now a bit from Chapter 8 of the Walsh Report on Iran/Contra:

Between February 27 and May 23, 1986, the Enterprise paid Defex Portugal about $860,000 for contra weapons. Weapons were delivered to Central America in March, April and May in three shipments. CSF books show profit distributions between April and June, numbered Phases V through VII, totaling $550,471. In addition, there was an unnumbered distribution of $37,277 on June 20, 1986, resulting from the Phase VII shipment.

The Undelivered Shipment and Distribution (July-September 1986)

In July 1986, the Enterprise paid Defex (Portugal) $2.6 million and $500,000 to another dealer, Monzer Al Kassar, for contra weapons. In late July, a shipment of arms left Portugal for Central America aboard the recently acquired Enterprise freighter, the Erria.8 According to Thomas Parlow, the Erria's Danish shipping agent, the freighter was carrying arms picked up in Poland and Portugal.9

8 Clines, Hakim and William Haskell, an associate of North, traveled to Copenhagen in April 1986 to purchase for approximately $320,000 the Erria, which the Enterprise had leased a year earlier for a weapons shipment to the contras. The ship was purchased by the Enterprise in the name of Dolmy Business Inc., a Panamanian shell company. Thomas Parlow became the Erria's Danish shipping agent. According to Parlow, Hakim would telephone Parlow to direct movement of the ship, and Parlow would communicate those directions to the ship's captain. (Parlow, FBI 302, 3/5/87, pp. 2-3.)

As the Erria was nearing Bermuda, Parlow, acting on instructions from Hakim, ordered it to slow its speed and await further instructions. Clines then directed the ship to work its way slowly back to Portugal.10 When it arrived in Portugal it could not obtain permission to enter the port. In this mid- to late-August 1986 period, Secord ordered Clines to try to sell the cargo or dump it at sea, according to Parlow. The vessel headed for Spain, where it remained anchored for two weeks.

10 The ship apparently was ordered back to Europe because it was to be used in an impending U.S.-Israeli venture involving Iran.

As the Erria made its circuitous journey, the CIA through a series of commercial entities arranged to buy the weapons aboard. According to CIA officials, they did not learn the identity of either the owner of the ship or its cargo until January 1987, when a newspaper article named the Secord-Hakim Enterprise as the owner of the ship and the weapons.

The CIA paid $2.1 million for the arms shipment, including shipping and handling costs.11 According to the private arms dealer who bought the arms for the CIA, he paid $1.6 million for the weapons. Of that, the Enterprise received $1.2 million, and the remainder went to Parlow or Defex, who worked together to re-sell the weapons.

And a bit further on we get a look at some of the cash amounts involved:

Because of the commingling of Enterprise funds, it was not possible to determine precisely how much money was diverted from the Iran arms sales proceeds to the contras. After direct U.S. sales of arms to Iran began in February 1986, the amount of proceeds diverted to the contras that could have been proved at trial was $3.6 million. It probably was at least $1.1 million more.51

51 The $3.6 million diversion estimate does not include expenditures OIC could not provide evidence for at trial but were, in fact, contra-related, including: the purchase of a $200,000 Jetstar by the Enterprise for contra-related travel; a $500,000 weapons purchase from Monzer Al Kassar, who was not available to testify; and about $535,000 that was used to purchase, operate and insure the Danish freighter, the Erria, which was not used exclusively for contra operations.

Independent Counsel arrived at the diversion figure of $3.6 million by calculating the Enterprise's total contra-related expenses following the first direct U.S. shipment of arms to Iran in February 1986, less the amount of funds in Enterprise accounts specifically deposited on behalf of the contras. The Enterprise's contra-related expenses after February were conservatively estimated at $6.7 million. The amount deposited for the contras was $3.1 million. Thus, the amount that was clearly diverted from the arms sales was $3.6 million.

North, in his testimony, attributed to Nir and Ghorbanifar the idea for a diversion of arms sales funds to the contras. In the Poindexter trial, although uncertain, he fixed the date in December 1985 or January or February of 1986.52 As early as November 14, 1985, North's notebooks show that he discussed with Nir a plan to obtain the release of the hostages by payments to certain Middle Eastern factions. The questions they discussed included: "How to pay for; how to raise $,'' and a possible solution was to set up a "joint'' Israeli-U.S. "covert op.'' According to the Israelis, North apparently told Israeli defense officials in a meeting in New York on December 6, 1985, that he intended to divert funds from the arms sales to the contras.

And, of course, Mr. Kassar was unavailable for testimony! Even more amazing is that he went from working for someone else to being his own operation just as this was going on. In exchange for doing this, Mr. Tijhuis cites a report that Mr. Kassar would get a 'pass' by the US on his narcotics trafficking in the region, thus allowing him to continue getting benefit for the deal above and beyond arms payments. ...

http://ajacksonian.blogspot.com/2007/06/monzer-al-kassar-and-transnational.html
••••••
That wouldn't be all. Far from it, Mr. Kassar would *also* be getting in good with BCCI and its ability to launder and transfer funds for illicit deals on a global basis. ... 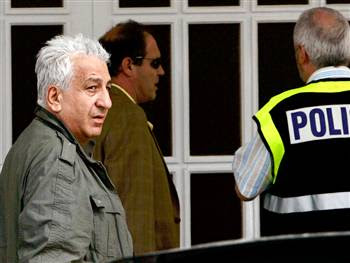 Kassar "without hesitation agreed to supply them with everything they asked for and more," Assistant U.S. Attorney Brendan McGuire told jurors.

Kassar lawyer Ike Sorkin says his client is a legitimate businessman.
"There's nothing illegal about being an international arms merchant," Sorkin said.

Godoy lawyer Roger Stavis asked his client to stand and face the jury.
"He's not a killer and he's not a terrorist," Stavis said, his hand on Godoy's shoulder.

In 1995, Kassar was acquitted of charges that he conspired to supply assault rifles to Palestinian militants who hijacked the Italian cruise ship Achille Lauro.