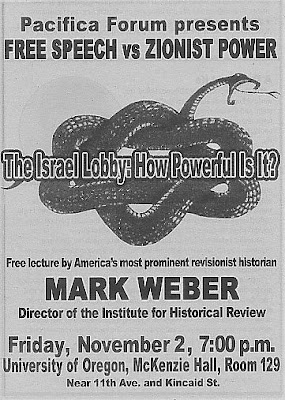 " ... Masquerading as opposition and dissident opinion, we have racist 'trufing' perhaps of the John Birch variey morphed via the leftist elite into the UNHOLY ALLIANCE of true stupidity. ... " 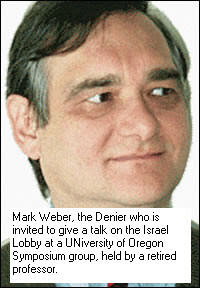 Right still wooing left: Mark Weber, director of the notorious, Holocaust-denying Institute for Historical Review, addressed a peace conference in August, and was reportedly "well-received." This report is from the IHR web site:

Mark Weber addressed a conference to promote peace and cross-cultural understanding on August 16 in suburban Baltimore. In a crisply delivered and well-received address, the IHR director spoke about the motives behind the US invasion of Iraq, the harmful consequences of America’s "blank check" support for Israel, the Jewish-Zionist grip on US foreign policy, the danger of new wars, and the prospects for an effective peace movement. The event was organized by an Islamic association, Jamaat Al-Muslimeen.

Among the other speakers were: Ramsey Clark, former US Attorney General; Charles E. Carlson, director of "We Hold These Truths," a Christian organization for peace and justice; and, Dr. Kaukab Siddique, MC and publisher of New Trend Magazine.

http://www.ihr.org/
•••••••
Beyond Words. Past Expression. Gladdened by 'academia', and the moral cowardice of elitist je ne sais crois.
By epaminondas
November 2, 2007

Eugene, Oregon....Home of the University of Orgeon...

Critics of a speaker widely viewed as one of the nation’s most prominent deniers of the Holocaust say they will counter his talk in Eugene on Friday with a competing event and a later symposium. 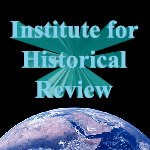 Mark Weber, director of the Institute for Historical Review (out of Willis Carto and the 'Liberty Lobby'), will speak on “The Israel Lobby.” His visit comes at the invitation of the Pacifica Forum, a local discussion group founded by retired University of Oregon professor Orval Etter (Orval Etter, associate professor emeritus. B.S., 1937, J.D., 1939, Oregon. (1939)).

Calling the Kennedy School of Govt at Harvard, we have a message for Herr Doktor Smears and Gruppenfuhrer Waltheimer. Advertisements for the event feature the image of a snake in the shape of a Star of David with the legend "The Israel Lobby: How Powerful Is It?"

Weber, a historian who grew up in Portland, describes himself as a Holocaust revisionist. But detractors point to Weber’s own writings in labeling him a white supremacist, racist and anti-Semite.

“People may think I’m wrong or I’m right, but they should have a chance to hear what I have to say,” Weber said in a telephone interview from his institute’s office in Newport Beach, Calif.

Can you imagine? Any view is due equal consideration? Is this the adulterated thinking of university symposiums?

What is this forum anyway ..check out their schedual:

11/2 - The INSTITUTE FOR HISTORICAL REVIEW - (Orval Etter)
7:00 - evening lecture by Mark Weber, Director of the IHR

10/19 - A review of Mearsheimer-Walt book, "The Israel Lobby and U.S. Foreign Policy"

9/21 - Post-Mortem on the Tolerance/Intolerance Breakfast, (reports and discussion)

Clearly, masquerading as opposition and dissident opinion, we have racist 'trufing' perhaps of the John Birch variey morphed via the leftist elite into the UNHOLY ALLIANCE of true stupidity.