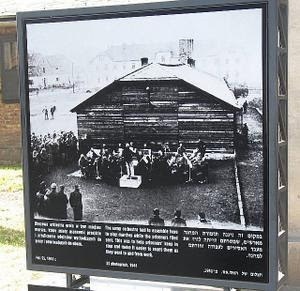 BARLETTA, Italy (AFP) — The idea of collecting music written in internment camps before and during World War II may not occur to everyone. But that has been Francesco Lotoro's quest since 1991.

"To allow the musicians to continue to work was also a way to control them better," said the 44-year-old Italian Jew. "At Auschwitz, there were seven orchestras."

Lotoro has amassed some 4,000 pieces, all composed between March 1933, when the Nazis' Dachau death camp was opened soon after Hitler won absolute power, and the end of World War II in 1945. But while much is from Nazi camps, Lotoro's collection covers internment camps from both sides of the war.

"I'm collecting all the music, written not just in Europe but also in Asia: Jewish religious songs, hymns by Dutch Quaker pastors, gypsy songs or those of an American, Edmund Lilly, held in a camp in the Philippines, and ballads by Italian soldiers held by the Allies," he said.

Carefully archived in Lotoro's office in Barletta, southern Italy, much of the music has never been recorded.

The son of distinguished Czech composer Rudolf Karel, who died at the Theresienstadt camp near Prague in 1945, gave Lotoro a photocopy of a five-part composition written on toilet paper. In a music shop in Prague, Lotoro met Eliska Kleinova, the sister of Gideon Klein, who was the organiser of cultural life at the Theresienstadt concentration camp in the Czech Republic and died in the gas chambers of Fuerstengrube.

Lotoro, himself an accomplished musician who studied under the celebrated French pianist Aldo Ciccolini, took home the music to a sonata Klein composed at Theresienstadt (Czech name is Terezin).

"I started studying it. There were a lot of mistakes. I corrected them, recorded it and sent it to Eliska. She was thrilled. It was a very difficult piece," Lotoro said.

At the camp, musicians were allowed to play a piano for half an hour a day, which may explain anomalies in some pieces.

"The piano lost some of its reality," said Lotoro, who sports a black beard and small round glasses. "The musician composed in his head, and the physical limits of the instrument didn't exist anymore. These pieces reflect a special sort of ventilation."

Lotoro, who teaches at the regional conservatory of music, added: "I respect all kinds of music. I refuse to choose between good and bad. Music written in the camps was not necessarily sad. It was about faith, family, the homeland. When I finish, we'll see if they have something in common." He has worked alone and with little financial help on a project he considers a "duty" as well as a "race against time".

"I hope to finish by 2012. It's expensive to bring together musicians and choirs. I hope to find a Rockefeller one day. Everything has to be recorded, and quickly. More than 60 years have already passed, and some of the music has been lost forever," he sighed.

Lotoro has a contract with Musikstrasse, an Italian cultural association, to record 32 CDs.

So far six have been produced and are on sale under the label KZ Musik.
"When I started, I thought I would find a few hundred works at most," Lotoro smiled.