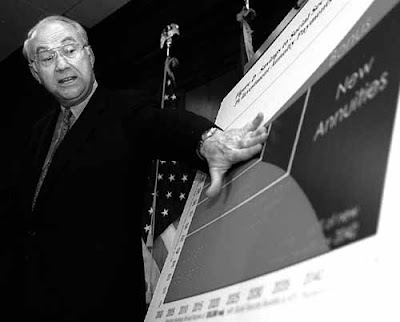 It is no surprise that Phil Gramm is John McCain's leading financial adviser.

When McCain decided to go after the 2008 Republican presidential nomination with gusto he realized that tactically the road to success lay in rolling over and becoming the reliant and supplicant puppy dog to Bush-Cheney and the neoconservative corporate bag men.

As such he could not have picked a better bag man than the former senator from Texas Gramm, who along with his wife created a king size loophole for Enron to be exempt from energy trading.

Phil's senatorial largesse to Ken Lay's corrupt company, which then had a "full speed ahead" signal to rape California's power supply, came after his wife Wendy, as chair of the Commodity Futures Trading Commission, had earlier pushed through a rule excluding Enron's energy futures contracts from government oversight.

Phil and Wendy Gramm would benefit handsomely from their Enron connection. While Phil received large contributions from Enron during his senate campaigns, Wendy would score the big payoff for the Gramms.

Wendy later, surprise of all surprises, actually joined Enron after going to bat for Ken Lay and company enthusiastically as CFTC chair. The grand payoff from her Enron salary and stock income brought in a rousing $915,000 to $1.8 million into the Gramm household.

Now Phil Gramm has the colossal gall to stand up and blame those Americans who have suffered from the rip-off policies of the Bush-Cheney neocon cons for being whiners, complaining that these are people who just do not have what it takes to make money on their own and as a result blame the glorious government that has served us so generously for two terms.

Now as always Phil Gramm is a gigantic fraud. Most Americans are working more hours than ever and seeing diminished results. Corporate prostitution such as that regularly displayed by the Gramms has seen the American economy collapse as we roar toward a $10 trillion debt figure combined with exploding gas prices and two costly wars.

Oh yes, Phil had to take a gratuitous swipe at seniors and Social Security in the process.

Corporate towel boys of Gramm's magnitude, with Grover Norquist a notable example, have always been furious over the New Deal's economic compact with regular Americans.

They are also furious over the firewalls President Roosevelt and willing congressional majorities instilled to safeguard against the kind of economic collapse we are currently witnessing.

As for John McCain, the guy riding shotgun on the "Straight Talk Express" has once more spoken volumes about the former Arizona maverick who in his anxiety for the presidency can now take a worthy bow as Mr. Corporate Sellout.