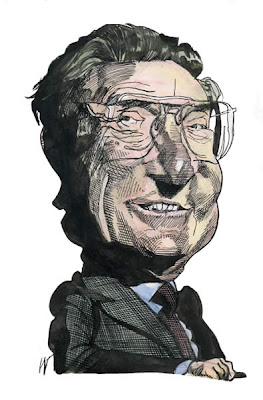 As George Soros is a liberal (not conservative) philanthropist it is entirely fitting that he would distribute some money to a handful of progressive (some might even say radical) media organizations. Thus progressive American groups that benefit from Soros's largesse include the Center for Media Education, Free Press, the Independent Media Institute (whose best known service is AlterNet), Pacific News Service, and Proteus Fund Inc. (In the past, MediaChannel has also received Soros funding). Given that most of Soros's philanthropy is linked to a democracy-manipulating agenda that is similar to that promoted by the notorious National Endowment for Democracy (NED), it could be argued that by lending his support to such well-respected progressive groups he helps further shield his less democratic work (which is where most of his money goes) from critical enquiry. Thus I will now provide a non-exhaustive list of Soros-funded media projects to illustrate the range of organizations that Soros makes use of to manipulate democracy worldwide.

• Youth Media Council: a group that was formed in 2001 to "increase the media strategy and capacity of the youth organizing sector" that has helped to build national networks like the Media & Democracy Coalition and the Media Action Grassroots Network.

• Public Radio International (PRI): a group that was created in 1983 to "give listeners greater choice in radio programming than had been available" (FAQs, 2007). As well as receiving funding from a range of liberal foundations (e.g., in 2005 they received a US$1.25 million grant from the Ford Foundation), PRI's work is also funded by the antidemocratic US Institute of Peace. (28) Moreover, their former president of 17 years, Stephen L. Salyer, is now the president of the elite planning group, the Salzburg Seminar.

• Al-Quds Educational Television (also known as the Institute of Modern Media): an Israeli-based "nonprofit media organization dedicated to strengthening the educational, culture, social and environmental well being of all Palestinians." The Institute is headed by Daoud Kuttab who founded it "with encouragement from the president of Al-Quds University Professor Sari Nusseibeh" -- an individual who is well known as an Israeli collaborator. Other 'democratic' funders of their work include Internews, the Westminster Foundation (which is the British version of the National Endowment for Democracy), and two groups that have received NED funding in the past, the Palestinian Center for Democracy and Elections, and the Palestinian Initiative for the Promotion of Global Dialogue and Democracy.

• CubaNet: a Cuban-based group which according to their Web site is a "non-profit organization that fosters free press in Cuba, assists its independent sector develop a civil society and informs the world about Cuba's reality," but significantly also receives funding from both the NED and the US Agency for International Development.

• ZaMir: an important Bosnian activist media network during the 1990s, which was supported by the NED.

• ARTICLE 19: a British-based group that has in the past obtained funding from the Westminster Foundation, and Rights and Democracy (the Canadian version of the NED). Gara LaMarche, the vice president and director of US programs for Soros's Open Society Institute, serves on ARTICLE 19's international advisory board.

• Committee to Protect Journalists: a US group that was created "in response to the often brutal treatment of their foreign colleagues by authoritarian governments and other enemies of independent journalism."

• Global Forum for Media Development: a group that receives funding from the NED and Ford Foundation amongst others.

• International Center for Journalists: a US group that was formed in 1984 to "improve[e] the quality of journalism worldwide." They are also supported by the NED.

• International Communications Forum (ICF) was founded in 1991 and is "devoted to media ethics and freedoms of expression and information." In 2003 their annual conference was sponsored by the Open Society Institute and the Ford Foundation amongst others: two of this group's six vice presidents are linked to Soros's media network as Rafael Marques de Morais (who worked as a representative in Angola for the Open Society Initiative for Southern Africa), and Frances Pinter (who is the former publishing director for the Soros Foundation).

• International Journalists' Network: a US-based group which aims to "help connect journalists with the opportunities and information they need to better themselves and raise journalism standards in their countries." Primary support for their work is provided by the Open Society Institute, the NED, and the John S. and James L. Knight Foundation.

• The New Press: a "not-for-profit publishing house" that was set up in 1990 to act as a "major alternative to the large, commercial publishers." In addition to receiving ongoing support from the Open Society Institute they are funded by a range of liberal foundations including both the Ford and Rockefeller Foundations. ...