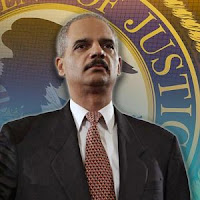 ... Given Chiquita’s underhanded record in Central America and Colombia it’s not a surprise that the company later sought to ally itself with COHEP in Honduras. In addition to lobbying business associations in Honduras however Chiquita also cultivated relationships with high powered law firms in Washington. According to the Center for Responsive Politics, Chiquita has paid out $70,000 in lobbying fees to Covington and Burling over the past three years.

Covington is a powerful law firm which advises multinational corporations. Eric Holder, the current Attorney General, a co-chair of the Obama campaign and former Deputy Attorney General under Bill Clinton was up until recently a partner at the firm. At Covington, Holder defended Chiquita as lead counsel in its case with the Justice Department. From his perch at the elegant new Covington headquarters located near the New York Times building in Manhattan, Holder prepped Fernando Aguirre, Chiquita’s CEO, for an interview with 60 Minutes dealing with Colombian death squads.

Holder had the fruit company plead guilty to one count of “engaging in transactions with a specially designated global terrorist organization.” But the lawyer, who was taking in a hefty salary at Covington to the tune of more than $2 million, brokered a sweetheart deal in which Chiquita only paid a $25 million fine over five years. Outrageously however, not one of the six company officials who approved the payments received any jail time.

The Curious Case of Covington

Look a little deeper and you’ll find that not only does Covington represent Chiquita but also serves as a kind of nexus for the political right intent on pushing a hawkish foreign policy in Latin America. Covington has pursued an important strategic alliance with Kissinger (of Chile, 1973 fame) and McLarty Associates (yes, the same Mack McLarty from Clinton-time), a well known international consulting and strategic advisory firm.

From 1974 to 1981 John Bolton served as an associate at Covington. As U.S. Ambassador to the United Nations under George Bush, Bolton was a fierce critic of leftists in Latin America such as Venezuela’s Hugo Chávez. Furthermore, just recently John Negroponte became Covington’s Vice Chairman. Negroponte is a former Deputy Secretary of State, Director of National Intelligence and U.S. Representative to the United Nations.

As U.S. Ambassador to Honduras from 1981-1985, Negroponte played a significant role in assisting the U.S.-backed Contra rebels intent on overthrowing the Sandinista regime in Nicaragua. Human rights groups have criticized Negroponte for ignoring human rights abuses committed by Honduran death squads which were funded and partially trained by the Central Intelligence Agency. Indeed, when Negroponte served as ambassador his building in Tegucigalpa became one of the largest nerve centers of the CIA in Latin America with a tenfold increase in personnel.

While there’s no evidence linking Chiquita to the recent coup in Honduras, there’s enough of a confluence of suspicious characters and political heavyweights here to warrant further investigation. From COHEP to Covington to Holder to Negroponte to McLarty, Chiquita has sought out friends in high places, friends who had no love for the progressive labor policies of the Zelaya regime in Tegucigalpa. ...

http://www.counterpunch.org/kozloff07172009.html
****
"Eventually, though, with Holder’s assistance Chiquita and the Justice Department came to an agreement in which the fruit company would pay a $25 million fine - the price of the company’s sale of Banadex, its Colombian subsidiary - for having made payments to a foreign terrorist organization. The fine’s proceeds went to the U.S. Treasury. ... "

After President-Elect Obama revealed that Eric Holder would be his choice for attorney-general, several observers raised questions about the nominee’s role as a private lawyer defending Chiquita Brands, the U.S. fruit company. Holder helped Chiquita negotiate a plea agreement with the Justice Department for the years of payoffs that the company made to paramilitary groups in a part of Colombia where the right-wing militias massacred hundreds, perhaps thousands, of civilians.

Hofstra University’s Mario Murillo, writing for CounterPunch: “not one Chiquita official involved in the illegal transactions was forced to serve time for a crime that others have paid dearly for, mainly because they did not have the kind of legal backing that Holder’s team provided. … If the Obama Administration is seriously concerned about impunity and human rights in Colombia, Holder should probably step out of the way immediately.”

Dan Kovalik of the U.S. Steelworkers’ Union, writing in the Huffington Post: “Eric Holder would have a troubling conflict of interest in carrying out this work in light of his current work as defense lawyer for Chiquita Brands international. … Holder himself, using his influence as former deputy attorney general under the Clinton Administration, helped to negotiate Chiquita’s sweeheart deal with the Justice Department in the criminal case against Chiquita.”

Jason Glaser, writing in the Guardian: “Does Holder represent the change we need and the change we were promised? It is time that someone who chooses to represent and serve human beings over corporations holds the position of attorney general.”

The story here is that after the Clinton administration drew to a close Holder, a former Clinton assistant attorney-general, went into private practice at the Covington and Burling law firm, where his clients included Chiquita. In 2003, Holder led the legal team that advised the fruit company to admit to the U.S. Justice Department that it had been making payments to the murderous United Self-Defense Forces of Colombia (AUC) since 1997 - a relationship that started out as “protection” money but went on way too long. The payments, which finally stopped in 2004, totaled about US$1.7 million to a group that, as of September 10, 2001, was on the State Department’s list of foreign terrorist organizations.

Oddly, as the Washington Post has reported, despite the terrorism link Holder and Chiquita at first had difficulty even getting a response out of Assistant Attorney-General Michael Chertoff, who would later go on to be the Bush administration’s Homeland Security secretary.

Eventually, though, with Holder’s assistance Chiquita and the Justice Department came to an agreement in which the fruit company would pay a $25 million fine - the price of the company’s sale of Banadex, its Colombian subsidiary - for having made payments to a foreign terrorist organization. The fine’s proceeds went to the U.S. Treasury.

There is a widespread perception that Chiquita’s punishment was quite lenient given the link with a terrorist group responsible for mass murder. Notably, the Justice Department indictment makes no mention of a potentially more serious charge, documented in a 2003 OAS investigation: that Chiquita’s Colombian subsidiary helped run weapons and ammunition from Nicaragua to the AUC.

How can we characterize the attorney-general-designate’s role? On one hand, Holder’s actions were commendable. Upon discovering that his client had broken the law, he advised it to go to the U.S. authorities. Notably, no other fruit company operating in northwestern Colombia’s conflictive Urabá region - and there are several - has come forward to admit to paying off armed groups. (It seems absurd that Chiquita would be the only one, and indeed demobilizing paramilitary leaders - including Salvatore Mancuso in a May 2008 60 Minutes interview - have alleged that they took payments from other companies in Urabá.)

Writing for Salon, Glenn Greenwald meanwhile makes the point that Holder should not be criticized for defending for a client, since all accused people have the right to defense counsel.

Attempts to criticize a lawyer for representing unsavory or even evil clients are inherently illegitimate and wrong — period. Anybody who believes in core liberties should want even the most culpable parties to have zealous representation before the Government can impose punishments or other sanctions. Lawyers who defend even the worst parties are performing a vital service for our justice system. Holder is no more tainted by his defense of Chiquita than lawyers who defend accused terrorists at Guantanamo are tainted by that.

This is true, and Holder’s defense of Chiquita should not disqualify him from serving as the Obama administration’s attorney-general.

Nonetheless, there are questions about Holder’s role that the Senate Judiciary Committee should explore before deciding on his nomination.

•Did Holder benefit from his contacts with former colleagues at the Justice Department in a way that allowed him to achieve a more lenient plea agreement than would have been possible for a less well-connected attorney?

•What role has Holder played in defending Chiquita from a class-action lawsuit filed in 2007 by 173 victims of paramilitary violence in the Urabá region? Has he advised his client to refuse any and all demands for restitution or reparations to victims? If so, how did he justify this position?

•In general, does Holder personally believe that U.S. corporations that do direct or indirect harm to citizens of a foreign country need not be held accountable to those citizens?

It will be difficult to get a definitive answer to any of these questions, and in fact the answer to all of them may be “no.”

Still, the U.S. Justice Department is likely to be dealing with Colombian paramilitary groups in several contexts, including possible future actions against U.S. corporations that may have aided them, and of course the criminal cases against fifteen extradited paramilitary leaders in U.S. custody since May of this year.

In private practice, Holder sought to downplay the severity of his client’s funding of Colombia’s paramilitaries and perhaps sought to prevent or minimize reparations to victims. As attorney-general, however, Holder can do great harm to U.S. credibility in Colombia and Latin America if he is perceived to be throwing obstacles in the way of the paramilitaries’ victims’ rights to truth and reparations. Because of his past work with Chiquita, his Justice Department’s actions with regard to future paramilitary cases will deserve extremely close scrutiny.