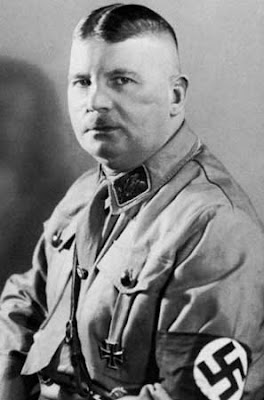 " ... these brown shirts became synonymous with their wearers; even today in Germany, to be 'brown' is to be disturbingly Right-wing. ... "

THE black-clad SS men strutted into the fat man’s cell. They placed a pistol on his table loaded with a single bullet; “10 minutes,” said one. “You’ve got 10 minutes.” Ernst Roehm, the prisoner, a man who had lived by violence all his life, revelled in it.

Death held no fear for him.

He had killed in the trenches of the First World War, killed on the streets of Germany in the chaos that followed defeat, taught killing to his men and once boasted: “Since I am an immature and wicked man, war and unrest appeal to me more than the good bourgeois order.”

But what did trouble him that day 75 years ago this week was the fact that his end had been ordered by his friend, mentor and even idol - Adolf Hitler.

When the 10 minutes were up Theodor Eicke, the head of the Dachau concentration camp, and SS captain Michael Lippert returned to the cell. Baring his chest theatrically, a scar on his face pulsating, Roehm screamed: “If I am to be killed let Adolf do it himself!” Both SS officers took out their revolvers and shot him at point blank range. As he fell dying Roehm gasped: “Mein Führer, mein Führer.”

For the slaughter of Roehm and his brown-shirted battalions proved to be the start of a new age of tyranny.

Before his death, Nazi Germany was struggling to refine its instruments of repression and subjugation. When Roehm died in that cell in Munich he had an army of four million street thugs at his command, a private army that Hitler knew he had to emasculate if there was to be only one Führer and one plan for the Reich that he proclaimed would last 1,000 years.

Roehm’s problem was that he believed in the myth of the “socialist” in the National Socialist German Workers’ Party - the Nazis. He saw his street fighters as the nucleus of a revolutionary army that would replace the Prussian officer corps with their class-riddled prejudices and habits.

But by the summer of 1934, Hitler had long forgotten such lofty ideals. He was on a warpath for world conquest.

Even though he had been only a humble corporal in the First World War, he knew that the thugs who beat up rivals in beer-hall meetings in the early days of the struggle would be no match for the professional armies of nations such as Britain and France.

Therefore, Roehm had to die.

Roehm had been born in Munich - the city later to become the birthplace of Nazism - in November 1887. Unlike common soldier Hitler, he was an officer with a Bavarian infantry regiment, serving with distinction in the First World War. Decorated for bravery he was nonetheless a coarse, brutal man. He was also an outrageous homosexual with a predilection for extremely young men.

How he should end up as one of the few people who addressed Hitler as “Adolf” rather than “mein Führer” and used the familiar “du” term instead of the formal “sie” is a mystery. But Hitler, whom he met in Munich before the Nazi Party was founded, saw in him the qualities of the merciless beast that he knew he would need to overthrow the old order.

Roehm began providing the muscle at Hitler’s meetings which, in the beginning, were less like political for­ums and more like Wild West brawls with Communists opposed to the Right-wing venom Nazis espoused. He called his brutal thugs the Sturmabteilung, Storm Detachments, which became shortened to the dreaded SA. Equipped with surplus uniforms once intended to be worn by victorious troops of the Kaiser after conquering parts of Africa, these brown shirts became synonymous with their wearers; even today in Germany, to be “brown” is to be disturbingly Right-wing.

Under Roehm, the SA became the private army of the party. It was they who broke heads in bars and stood outside Jewish shops preventing Germans from entering. They rounded up Left-wingers and students and bundled them off to the first concentration camps. They marched through Munich in 1923 during the failed putsch in which Hitler attempted to seize power and was beaten back by a few well-aimed police bullets.

Roehm was sentenced to jail along with Hitler but was out the same day after promising the court to behave himself. The SA was banned and Roehm went to Bolivia where he served as a military adviser to that country’s army for five years.

By September 1930 Hitler was out of prison but also still out of power. With the SA re-formed, he begged his old friend to return from South America to lead it.

Roehm did so and within months the SA’s ranks had swollen to one million. Roehm’s legions continued to repress Left-wingers and newspapers that attacked the Nazis, and battled on an almost daily basis in the major cities with Communists.

When Hitler did come to power in January 1933, the SA was anointed as an auxiliary police force. But crucial ideological differences began to grow between the Führer and his enforcer.Roehm rejected capitalism, whereas Hitler courted the wealthy as he needed them to bankroll his arms build-up. Roehm pushed for nationalisation of industry whereas Hitler promised wealthy families such as the Krupps and Thyssens and other industrial barons autonomy to keep making money so long as they backed him. Roehm even spoke of a “second revolution”, terrifying the business community that continued to support Hitler. The Führer said he had the brown shirts firmly under his control but he was worried.

In February 1934 Roehm demanded publicly that the Reichswehr (the nation’s defence force limited to 100,000 troops by the Versailles peace treaty after the First World War) be subsumed into an SA that would then become Germany’s new army.

Army officers joined business leaders and churchmen in their disquiet over Roehm. Hitler met German military leaders in April 1934 and offered to reduce the SA’s numbers and severely rein in Roehm’s political ambitions.

SS chief Heinrich Himmler, along with his second in command Reinhard Heydrich and future Air Force chief Hermann Goering, began plotting against Roehm to prod Hitler into action against his old comrade, hoping to gain from his downfall. They mounted a black propaganda plot to try to prove to Hitler that Roehm was intending to overthrow him. It mattered little whether Hitler thought the plot against him was real or not: he had already made his mind up to move against Roehm.

In June 1934, Hitler and Roehm had a five-hour private meeting lasting until midnight in which the Führer asked for assurances that he would cease his public utterances about a “second revolution” and rein in his men. Roehm declined. A few days later Roehm announced he was taking a “personal illness” holiday and the whole SA would go on leave for the month of July. He also convened a conference of SA leaders for June 30 at the Hanselbauer Hotel in Bad Wiessee near Munich which Hitler promised to attend “to sort things out”.

The German army was placed on alert, all leave cancelled and the troops confined to barracks. An agreement had been secretly worked out between Himmler and the generals ensuring co-operation between the SS and army in the coming action against the SA.

Hitler went to Bad Wiessee. He knocked softly on Roehm’s door: “Message from ­Munich,” he said in a disguised voice.

“Well come in,” Roehm replied. Hitler tore open the door, fell on him as he lay in bed, seized him by the throat and screamed: “You are under arrest, you swine.” In the room next door SS men found men engaged in ­homosexual activity. “And these are the kind who want to be leaders in Germ­any,” the Führer said, trembling.

In the following hours other SA leaders were arrested and many shot. Hitler had initially intended to pardon Roehm but then decided he should die in the Munich cell in which he was held. Several hundred people were murdered, thousands more imprisoned in concentration camps. The Gestapo cellars were filled, the power of the SA was broken, the power of the army preserved and the business enterprises that would provide the materials for Hitler’s eventual military conquest of Europe left well alone.

The SS emerged as the sole arbiter of state-run terror, a gang of cut-throats who would eventually make Roehm’s SA men look like bouncers at a dance hall.

From this day forward nothing would be the same again in the fledgling Nazi state. By getting rid of his once favourite thug, Hitler had left no one in any doubt: he alone was in charge.