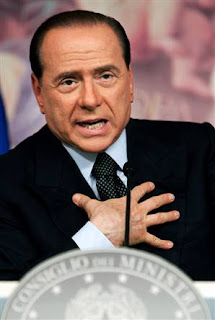 July 22 (Bloomberg) -- Prime Minister Silvio Berlusconi said he’s “no saint” after an Italian magazine released more tapes of what it said were conversations between Italy’s leader and a high-priced call girl. I news magazine yesterday published for a second day tapes purporting to show Berlusconi talking with Patrizia D’Addario, who claims to have been paid to attend parties with the premier. The tapes appear to describe details of her spending the night with Berlusconi at his Rome residence.

“I’m no saint,” Berlusconi, 72, said in a speech in the northern city of Brescia. “You all know that.” A month ago, Berlusconi told a news conference in the earthquake stricken region of Abruzzo in response to news reports about his ties to other women that “Italians like me the way I am.”