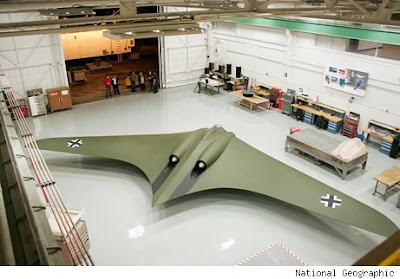 The last remaining Horten 2-29, a Nazi fighter plane from World War II, is stored in a U.S. government warehouse akin to the one at the end of 'Indiana Jones and the Raiders of the Lost Ark.' With a mostly pressed-wood body and a sleek all-wing design, it looks like something created in Hollywood, too. But this aircraft isn't just a pretty piece of painted plywood. It very well could have changed the course of the war.

A group of experts from Northrop Grunman, a global security company, recently re-built the Horten 2-29 for a television special airing Sunday on the National Geographic Channel. The team's goal was to determine if the rumors were true; was the Horten 2-29 the world's first stealth fighter? They tested the original aircraft with WWII-era radar technology before building a model held together with primarily wood and glue. Then, they hoisted it on top of a five-story column and subjected the model to the same radar technology.

In the end, the team discovered that the plane would have been detected by radar 80 miles from the British coast instead of 100 miles away. While 20 miles doesn't sound like much, stealth expert Tom Dobrenz did tell National Geographic that it would have cut the Allied Forces' available time for response in half. So, could this plane have changed the course of WWII? Probably not, historian George Cully explained. The Nazis only had time to develop a couple of prototypes of the 2-29 around Christmas in 1944. By then, time was running out for Hitler and his army. [From: National Geographic]