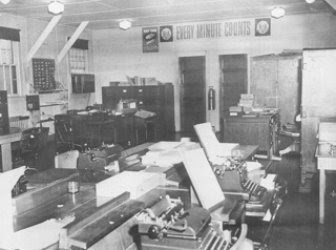 Unless you are one of the few remaining soldiers who worked at “P.O. Box 1142” during World War II, there is a very good chance you have never heard of it.

While the specter of Area 51 holds far more pop-cultural and historical cachet as a top-secret government installation, the work done at P.O. Box 1142, the codename of a World War II-era prisoner of war interrogation facility at Fort Hunt — just a few miles from the grounds of Mt. Vernon — speaks volumes today.

Outside of the ever-dwindling number of living staff members, no one really had a clue as to what happened at the site because until recently the majority of records and memories of P.O. Box 1142 were still classified, according to Brandon Bies, a cultural resource specialist at Fort Hunt Park.
“If you go back three years, we knew virtually nothing about what happened at this place in World War II,” Bies said.

Bies and other National Park Service staff began to piece together the facility’s clandestine past, assembling an oral history through interviews with the former interrogators.

From 1942 to 1946, military interrogators questioned more than 3,400 prisoners of war — the majority of whom were Nazi soldiers or naval men — and about 500 key German scientists as part of Operation Paperclip, Bies said.

“They definitely uncovered some pretty significant stuff,” Bies said, going on to explain the German’s acoustic torpedo program that was uncovered at Fort Hunt and allowed Allies to develop their own countermeasures in defense.

The fact that the mostly Jewish-American interrogators extracted mountains of information humanely and professionally, without inflicting any sort of physical harm, the interrogators say, caught the attention of many and made the story all the more remarkable in light of America’s recent history on the subject.

Rep. Jim Moran (D-8) was one of those who took notice of the accomplishments of P.O. Box 1142 and thinks the precedent it set resonates today.

“These Jewish-American interrogators chose not to wreak vengeance through torture on their German captives but rather to befriend them on a person level,” Moran said. “They took long walks with them, they played checkers and they related to them on a personal level.

“The information that these people back in the 1940s got was invariably reliable because they used professional and psychological techniques to gain information.”

Some of the men who staffed the interrogation facility during the war said they could never have brought themselves to torture or hurt a captive prisoner.

“I never compromised my humanity and I never laid hands on a prisoner, even though some of them were pretty despicable people,” said George Frenkel, 90, who led a transcription team in 1942 at Fort Hunt before becoming an interrogator in Europe later on in the war.

“We were pledged by the Geneva Convention not to mistreat prisoners and I kept strictly to that edict,” Frenkel said. “Even if I had been so instructed, I would have never mistreated a prisoner; that was against my concept of humanity.”

George Mandel, now in his mid-80s, interrogated many scientists at the end of the war, including Wernher von Braun — a key figure in the Nazi’s rocket program and later with NASA — at Fort Strong in Boston.

Although his period at P.O. Box 1142 was much different and far less tense than Frenkel’s stint, Mandel, too, said that torture was never a part of the program.

Mandel said that he had conversations with interrogators who worked at Ft. Hunt earlier in the war who said that they “never used terror or brutality” to extract information.

“Playing games or something like that worked perfectly well,” he said.

Frankel and Mandel, both Berlin-born Jews, had immigrated to the U.S. with their families during the 1930s. Both were very young men when they were sent to Alexandria’s Fort Hunt.

During Mandel’s roughly six months at P.O. Box 1142, he learned about proximity fuses and jet engines. “I’d never been in an airplane at that point and the idea of jet engines was a brand new idea,” he said.

Yet, despite their legacy, many of the veterans associated with Fort Hunt and P.O. Box 1142 have spoken out against the discovery of American forces recently using torturous or harsh techniques to get information from prisoners of war and enemy combatants.

“I was very distressed by the fact that Americans, with our sort of humanitarian heritage, would engage in that sort of activity,” Frenkel said. “This water boarding and whatever else you call it was horrible.”

The possibility that some of the individuals who may have been harshly interrogated at Guantanamo Bay or elsewhere may end up standing trial not all that far from P.O. Box 1142 in Alexandria — the home of George Washington, who ordered Revolutionary soldiers not to torture Hessians working with the British, Moran said — is an interesting historical coincidence.

“Unfortunately, we’ve been through a period of law where people have violated the rule of law with impunity. But I think we can regain it and I think Alexandria, again, might have an opportunity to play a role in that, albeit a smaller role than before,” Moran said, adding that even if the possibility that Alexandria hosts Guantanamo detainees it would never come close to reaching the scale of Fort Hunt.

“I think that this is a story that should be told, because this is far more representative of what America is all about, what these citizens did and got no credit for,” he said.