So did Obama: " ... the Obama administration indicated it would not investigate the matter since the killings involved only foreigners and took place outside the U.S. ... "

Also see: "Obama Admin: No Grounds To Probe Afghan War Crimes," CBS News, July 11, 2009... "Obama's remarks follow an investigative report in The New York Times on July 10
which claims the Bush administration repeatedly discouraged efforts to investigate the killings because Dostum was on the payroll of the CIA and because Dostum's militia forces were working closely with U.S. Special Forces against the Taliban."
http://www.rferl.org/content/Obama_Calls_For_Facts_On_Mass_Killing_Of_Taliban_At_Sheberghan/1776726.html 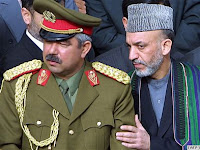 Warlord Abdul Rashid Dostum Political alliances with anti-Taliban forces kept the Bush administration from investigating allegations of mass slaughter in November 2001by Afghanistan soldiers under the command of warlord Abdul Rashid Dostum, who was on the CIA payroll and later became military chief of staff for President Hamid Karzai. According to The New York Times, the Bush White House disregarded calls from the FBI, the State Department, the Red Cross and human rights groups to determine if hundreds, and possibly more than a thousand, Taliban fighters were either shot or left to die inside shipping containers after surrendering to Dostum’s forces. Earlier news reports of a possible mass grave in Dasht-i-Leili surfaced in 2002, but it was only last week that allegations arose of the Bush administration’s complicity in the cover up.

After The New York Times broke the story last Friday, the Obama administration indicated it would not investigate the matter since the killings involved only foreigners and took place outside the U.S. But on Monday President Barack Obama told CNN that he had instructed his national security team to investigate whether Bush officials had interfered with attempts to expose the massacre.