The Council of Conservative Citizens 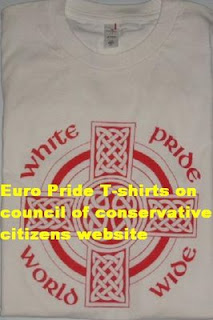 A Republican state senator recently spoke to a national meeting of the Council of Conservative Citizens in Jackson. Some local liberals as well as the local progressive weekly alternative rag sharply criticized her for doing so as well as the state Republican Party chairman for not condemning her actions to their satisfaction. Since I did not know much about the Council of Conservative Citizens, I decided to check out their Web site. Buckle your seatbelts.

On the national organization's Web site, six of the nine "stories" posted are about race-related matters. For a group that touts itself as a leading conservative organization, there is no mention of taxes, deficit spending, expanding government, the erosion of civil liberties but there are more than a few words given to what blacks are doing to whites.

The Web site's blogs make for interesting reading. One accuses New York of "declaring war on white people." It blames the train operator's falling asleep causing the train wreck in Washington, D.C., on "diversity hiring," never mind that D.C. is heavily minority in population. (Someone should tell him that in D.C., hiring a white person would be the diversity hire.) He also mentions blacks robbing graves in Chicago.

Then there is the anti-Semitism. The same blogger refers to an L.A. Times article about Michael Jackson as a "piece of Jewish garbage" and opines about Steve McNair's death:

"McNair may have been a decent guy, but nothing can hide the obvious truth that wherever blacks go, crime, death, and misery follow. The sports channels will recount all McNair’s stats as they lionize him as a hero and great American. I’ll certainly rank him well above Michael Jackson, but let’s not get carried away. Could you imagine the howls of laughter if the sports TV Jews like Chris Berman, Rich Eisen, Linda Cohn, (the list could go on and on)"

Christians don't escape their ire either as the Family Research Council, attacked by liberals everywhere for being conservative and Christian in nature, apparently doesn't meet his definition of conservatism:

"Tony Perkins, head of the Family Research Council, and the evangelical’s man in D.C., recently held a rally in the nation’s capital to oppose same-sex marriage. There were several speakers at the rally -- Perkins, the FRC’s Uncle Tom “Bishop” Harry Jackson, some brown guys who can’t speak English, etc..." He even bashes Billy Graham. You got it. Even Billy Graham is the enemy. Other money quotes from this blogger:

"The sooner the GOP collapses, and is replaced by a party that will speak up for white people, the better."

"Anyone who thinks free speech can survive in a multiracial America is dreaming."

Another blog on the Web site has the headline "Saving the White Race" and states:

Over at the Alabama chapter's Web site there is a post titled "Stuff black people don't like" with the above picture and a link to a Web site containing black jokes. The chapter has a list of "recommended reading." Here is a taste of the vintage found in this winery of racism:

The Citizens’ Council: Organized Resistance to the Second Reconstruction, 1954-64? by Neil R. McMillan

“You and Segregation” by former Georgia Sen. Herman E. Talmadge

This organization is not a conservative group as conservatives believe in a limited government that is color-blind, free-market capitalism, strong national defense, and civil liberties for all. Racism has no place in conservatism or the Republican Party. Mississippi Republicans have no business whatsoever speaking to this group as Republicans. The chairman needs to condemn this group in no uncertain terms as racism and anti-Semitism have no place in the Republican big tent.

A group like this shouldn't get the attention it has recently as it is a fringe group but since a Republican state senator decided to welcome them, the onus is on the Republican Party to show these guys the door and make it clear the council is not welcome to Republicans or true conservatives. William F. Buckley and others threw out the Birchers when it became clear the Birchers were not true conservatives. Mr. White, Gov. Barbour, and others should do the same and show the Council of Conservative Citizens the door.

James Hendrix is a Northsider.