The Corporate Roots of Auschwitz

Holocaust Survivor gets PhD for Thesis on Roots of Auschwitz
By Cnaan Liphshiz, Haaretz Correspondent
14/07/2009 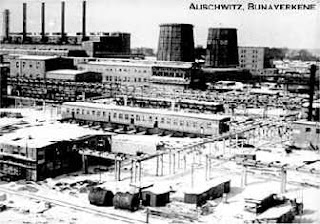 At the ripe age of 81, a Holocaust survivor from Haifa has received a PhD for a thesis showing how Auschwitz-Birkenau began as a camp for coerced laborers working for a mismanaged Nazi industrial project.

"My life never had much of a linear or logical course," Eliezer Schwartz said when asked why he decided to enter academia so late in the game. Before he began researching the Nazi concentration and extermination camp in Poland, Schwartz worked for many years as project head and urban planner for Solel Boneh, the Israeli construction giant.

When Schwartz retired at 75, his three grandchildren advised him to write a doctoral thesis, which he wrote with pen and paper. "Computer skills are a bit much for me now," he said. His non-academic, very practical life experience gave Schwartz a special edge over more bookish historians when writing his thesis for the University of Haifa.

This practical experience came in handy when he started his thesis about how an industrial park that was built 3 kilometers from Auschwitz may have affected the famous death camp. Schwartz, whose only scholastic achievement prior to the age of 45 was a high school diploma, found that mismanagement at the industrial complex which the German concern I.G. Farben was trying to build near Auschwitz, required tens of thousands of slave workers, most of them Jewish.

Thus, according to his thesis, the camp at Auschwitz came to house more and more Jews as early on as 1940 - two and half years before the camp itself became a death factory where over one million Jews were murdered.

By reviewing the factory books and other documents, Schwartz - who was born in Satu Mare, Romania - was able to show that the reason that the Farben compound needed so many slaves was gross mismanagement.

"This is counterintuitive, since we are talking about a German-built huge complex," he said. "To understand how a people that were considered meticulous and precise did such clumsy work, you will have to read the full study."

The Nazi project, which began in 1940, exceeded its 1943 deadline for completion by two years, and in fact was still in construction when the area was liberated by the Red Army. Out of tens of thousands of coerced labors, some 30,000 slave workers died there in work accidents and other causes.

"The project had a critical contribution to the enlargement of the capacity at Auschwitz and its transformation into a central reservoir of work force for Nazi Germany's war industry, and later as an extermination center," Schwartz said. Ironically, he adds, I.G. Farben also manufactured the gas that was used to kill Jews at Auschwitz-Birkenau, although the plant near the camp was meant to produce rubber and synthetic oil.

The plant's managers - who hosted Heinrich Himler on his frequent visits - were tried after the war at Nuremberg, and received prison sentences of a few years each. "The Germans don't like to be reminded of all this business," Schwartz said.