"... Mr Aljibury, once Ronald Reagan's 'back-channel' to Saddam, claims that plans to sell off Iraq's oil, pushed by the US-installed Governing Council in 2003, helped instigate the insurgency and attacks on US and British occupying forces. ... "
--
Secret US plans for Iraq's oil
By Greg Palast
Reporting for Newsnight
17 March, 2005 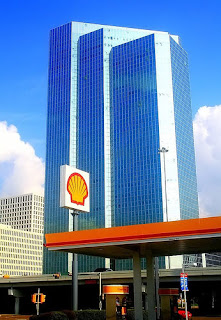 The Bush administration made plans for war and for Iraq's oil before the 9/11 attacks, sparking a policy battle between neo-cons and Big Oil, BBC's Newsnight has revealed. Two years ago today - when President George Bush announced US, British and Allied forces would begin to bomb Baghdad - protesters claimed the US had a secret plan for Iraq's oil once Saddam had been conquered.

In fact there were two conflicting plans, setting off a hidden policy war between neo-conservatives at the Pentagon, on one side, versus a combination of "Big Oil" executives and US State Department "pragmatists".

"Big Oil" appears to have won. The latest plan, obtained by Newsnight from the US State Department was, we learned, drafted with the help of American oil industry consultants.

Insiders told Newsnight that planning began "within weeks" of Bush's first taking office in 2001, long before the September 11th attack on the US.

An Iraqi-born oil industry consultant, Falah Aljibury, says he took part in the secret meetings in California, Washington and the Middle East. He described a State Department plan for a forced coup d'etat.

Mr Aljibury himself told Newsnight that he interviewed potential successors to Saddam Hussein on behalf of the Bush administration.

The industry-favoured plan was pushed aside by a secret plan, drafted just before the invasion in 2003, which called for the sell-off of all of Iraq's oil fields. The new plan was crafted by neo-conservatives intent on using Iraq's oil to destroy the Opec cartel through massive increases in production above Opec quotas.

The sell-off was given the green light in a secret meeting in London headed by Fadhil Chalabi shortly after the US entered Baghdad, according to Robert Ebel.

Mr Ebel, a former Energy and CIA oil analyst, now a fellow at the Center for Strategic and International Studies in Washington, told Newsnight he flew to the London meeting at the request of the State Department.

Mr Aljibury, once Ronald Reagan's "back-channel" to Saddam, claims that plans to sell off Iraq's oil, pushed by the US-installed Governing Council in 2003, helped instigate the insurgency and attacks on US and British occupying forces.

"We saw an increase in the bombing of oil facilities, pipelines, built on the premise that privatisation is coming." 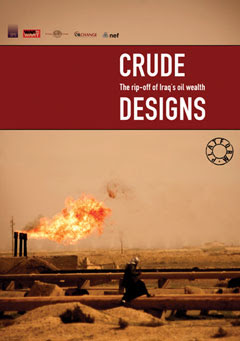 Philip Carroll, the former CEO of Shell Oil USA who took control of Iraq's oil production for the US Government a month after the invasion, stalled the sell-off scheme. Mr Carroll told us he made it clear to Paul Bremer, the US occupation chief who arrived in Iraq in May 2003, that: "There was to be no privatisation of Iraqi oil resources or facilities while I was involved."

Ariel Cohen, of the neo-conservative Heritage Foundation, told Newsnight that an opportunity had been missed to privatise Iraq's oil fields.

He advocated the plan as a means to help the US defeat Opec, and said America should have gone ahead with what he called a "no-brainer" decision.

Mr Carroll hit back, telling Newsnight, "I would agree with that statement. To privatize would be a no-brainer. It would only be thought about by someone with no brain."

New plans, obtained from the State Department by Newsnight and Harper's Magazine under the US Freedom of Information Act, called for creation of a state-owned oil company favoured by the US oil industry. It was completed in January 2004 under the guidance of Amy Jaffe of the James Baker Institute in Texas.

Formerly US Secretary of State, Baker is now an attorney representing Exxon-Mobil and the Saudi Arabian government.

Questioned by Newsnight, Ms Jaffe said the oil industry prefers state control of Iraq's oil over a sell-off because it fears a repeat of Russia's energy privatisation. In the wake of the collapse of the Soviet Union, US oil companies were barred from bidding for the reserves.

Ms Jaffe says US oil companies are not warm to any plan that would undermine Opec and the current high oil price: "I'm not sure that if I'm the chair of an American company, and you put me on a lie detector test, I would say high oil prices are bad for me or my company."

The former Shell oil boss agrees. In Houston, he told Newsnight: "Many neo conservatives are people who have certain ideological beliefs about markets, about democracy, about this, that and the other. International oil companies, without exception, are very pragmatic commercial organizations. They don't have a theology." ...

Newsnight is broadcast every weekday at 10.30pm on BBC Two in the UK.