Gerald Ford was Forced to Admit the Warren Report was Fictionalized 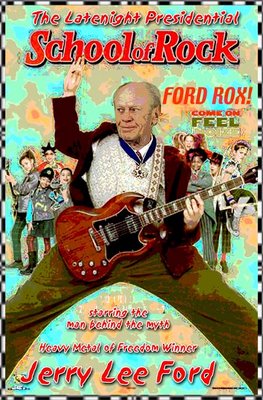 WASHINGTON (July 2) - Thirty-three years ago, Gerald R. Ford took pen in
hand and changed - ever so slightly - the Warren Commission's key sentence on the place where a bullet entered John F. Kennedy's body when he was killed in Dallas.

The effect of Ford's change was to strengthen the commission's conclusion that a single bullet passed through Kennedy and severely wounded Texas Gov. John Connally - a crucial element in its finding that Lee Harvey Oswald was the sole gunman. 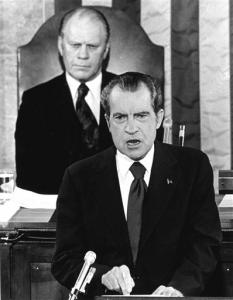 A small change, said Ford on Wednesday when it came to light, one intended
to clarify meaning, not alter history.


''My changes had nothing to do with a conspiracy theory,'' he said in a telephone interview from Beaver Creek, Colo. ''My changes were only an attempt to be more precise.''

But still, his editing was seized upon by members of the conspiracy community, which rejects the commission's conclusion that Oswald acted
alone.

''This is the most significant lie in the whole Warren Commission report,'' said Robert D. Morningstar, a computer systems specialist in New York City who said he has studied the assassination since it occurred and written an Internet book about it.

The effect of Ford's editing, Morningstar said, was to suggest that a bullet struck Kennedy in the neck, ''raising the wound two or three inches. Without that alteration, they could never have hoodwinked the public as to the true number of assassins.'' 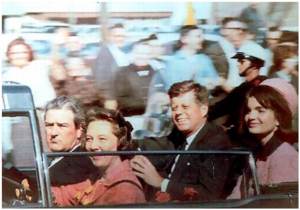 If the bullet had hit Kennedy in the back, it could not have struck Connolly in the way the commission said it did, he said.

The Warren Commission concluded in 1964 that a single bullet - fired by a
''discontented'' Oswald - passed through Kennedy's body and wounded his
fellow motorcade passenger, Connally, and that a second, fatal bullet, fired from the same place, tore through Kennedy's head.

The assassination of the president occurred Nov. 22, 1963, in Dallas; Oswald was arrested that day but was shot and killed two days later as he was being transferred from the city jail to the county jail.

Conspiracy theorists reject the idea that a single bullet could have hit both Kennedy and Connally and done such damage. Thus they argue that a second gunman must have been involved.

Ford's changes tend to support the single-bullet theory by making a specific point that the bullet entered Kennedy's body ''at the back of his neck'' rather than in his uppermost back, as the commission staff originally wrote.

Ford's handwritten notes were contained in 40,000 pages of records kept by
J. Lee Rankin, chief counsel of the Warren Commission.

They were made public Wednesday by the Assassination Record Review Board, an agency created by Congress to amass all relevant evidence in the case. The documents will be available to the public in the National Archives.

The staff of the commission had written: ''A bullet had entered his back at a point slightly above the shoulder and to the right of the spine.''

Ford suggested changing that to read: ''A bullet had entered the back of his neck at a point slightly to the right of the spine.''

The final report said: ''A bullet had entered the base of the back of his neck slightly to the right of the spine.'' 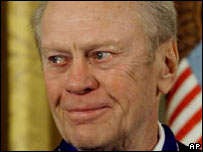 Ford, then House Republican leader and later elevated to the presidency with the 1974 resignation of Richard Nixon, is the sole surviving member of the seven-member commission chaired by Chief Justice Earl Warren.