(Berlin) Within weeks of Hitler's 1933 rise to power, the iron gates slammed shut on inmates of the first Nazi concentration camps. It was the start of an unparalleled experiment in persecution and genocide that expanded over the next 12 years into a pyramid of ghettos, Gestapo prisons, slave labor camps and, ultimately, extermination factories.

Holocaust historians are only now piecing together the scattered research in many languages to understand the vast scope of the camps, prisons and punishment centers that scarred German-ruled Europe, like a pox on the landscape stretching from Greece to Norway and eastward into Russia.

Collecting and analyzing fragmented reports, researchers at the U.S. Holocaust Memorial Museum say they have pinpointed some 20,000 places of detention and persecution - three times more than they estimated just six years ago.

And soon they will know much more.

The 11 countries governing the ITS have agreed to lift the ban on research that had been imposed to safeguard victims' privacy, though it still will take months until each country ratifies the decision and the doors open.

Recently, The Associated Press was allowed to view ITS documents on condition it did not publish the identities of individuals. Among the yellowed pages and pasted telegrams seen by AP were internal communications, secret orders, and "conduct reports" that determined whether inmates would be freed.

The "pyramid" ranged from death camps such as Auschwitz at the top, to secondary and tertiary detention centers. There were 500 brothels, where foreign women were put at the disposal of German officers, and more than 100 "child care facilities" where women in labor camps were forced to undergo abortions or had their newborns taken away and killed - usually by starvation - so the mothers could quickly return to work.

The earliest prisoners were communists, Social Democrats, Jehovah's Witnesses and other political opponents, as well as homosexuals and common criminals. The Final Solution, which ultimately would claim 6 million Jewish lives, had not yet begun.

Survivors have described the camps in agonizing detail, recounting unbearable suffering and calculated brutality. But historians have long sought to know more about the inner workings of the camps, hoping to draw on the Germans' own firsthand accounts and paperwork.

One directive seen by the AP, from November 1943 and marked Private and Confidential, instructed all camp commanders to keep visitors away from sensitive sites.

"During visits to the concentration camps, the bordellos and the crematoria are not to be shown. Visitors also are not to be told anything about these facilities," said the order, signed by the divisional commander of the SS, the elite unit that guarded the camps.

Couched in patronizing and dehumanizing language, documents from the earliest camps foreshadow a system that would define the word "genocide." They show that years before the mass-scale killings began at death camps such as Auschwitz, the intellectual groundwork of viewing categories of humanity as subhuman was already in place. 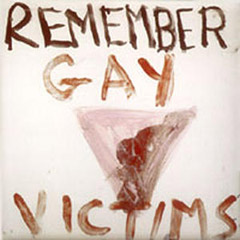 The records include two camps previously known to the Washington researchers, but about which few SS documents were available. Sachsenburg and Lichtenburg in eastern Germany were among the first sites opened in early 1933, but were closed in 1937 when the system was restructured into larger camps that housed tens of thousands of prisoners. Afterward, both served briefly as women's camps.

"There are approximately 4,000 pages of material that no one else in no other archive has access to," said Joseph White, of the Center for Advanced Holocaust Studies at the U.S. Holocaust Memorial Museum, who has seen only a catalog of the ITS documents on the two camps.

"These were records that were always under the control of the SS. That's very rare to find for these early camps," he said by telephone from Washington.

Such documents could help trace the evolution of the camp system from its genesis, White said.

It was at Sachsenburg, for example, that the SS first used colored triangles sewn onto clothing to identify categories of prisoners, a method widely adopted later. Armbands with different markings denoted a hierarchy among the inmates, from kitchen workers to "seniors."

Files on the two camps seen by AP reveal an utter contempt by the SS not only for inmates but for civilian authority, at a time when Nazi rule had not yet taken full control of all institutions of power.

In Lichtenburg - a drafty, disused Renaissance castle - an officer reported to his commander that the "sharp cutback of bread and rations is having a negative effect" on the prisoners, who were looking "sleepy and tired" and increasingly ill, he reported. No response was found in the file of correspondence.

Among Sachsenburg's conduct reports was evidence of the commandant's blatant snub of a court in Dresden, which had asked for the "urgent release" of an inmate to appear as a witness in a trial. The commandant wrote back with a flat refusal.

Sachsenburg authorities issued periodic behavior reports, but often they were just a sentence or two. "G. is a worthless subject and an irresponsible person. He would not be harmed by undergoing a really long upbringing in the camp. He is an example of the need for such camps," said one typical report.

The ITS has 17 files on Sachsenburg, each containing several hundred such reports.

Sachsenburg was an abandoned four-story textile mill, renovated in May 1933 to serve as a "protective custody" facility for dissidents such as Jehovah's Witnesses, outlawed in 1935 because they were among the most obstinate opponents of the Nazi regime, refusing to sing the anthem, give the Hitler salute, respond to the military draft or vote in elections.

In a series of reports over several years, one prisoner is repeatedly denounced as a "stubborn ... Bible student," who tried "to promote his Biblical verses through the hammer and sickle and the Soviet star." Though it did not specify, the wording suggested that the inmate was a Witness apparently trying to convert his communist prison mates.

Before being released, prisoners had to sign a declaration that they would never speak against the Nazis and would report anyone who did. "I will not ask for any compensation," the pledge concluded. "I have not been forced to make this declaration."

The ITS files will be a boon to the researchers in Washington, who are compiling a seven-volume encyclopedia of all known sites where "undesirables" were detained, tortured, put to work or killed. The first volume is in the final editing stage - probably too late to take advantage of the Bad Arolsen archive.

"Most historians didn't have a grasp of the scope of the whole universe of camps and ghettos," he said. "Each of them knew their own little slice." 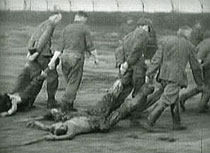 When they began work six years ago, Megargee said the researchers estimated 5,000 to 7,000 sites existed. "Based on our research, it is now clear that there were over 20,000 such sites in Germany, in German-occupied territories and in the states allied with Nazi Germany," he said.

Steven Katz , director of the Elie Wiesel Center for Judaic Studies at Boston University who is not connected with the project, said the encyclopedia will be "enormously useful." Though it will have few surprises for scholars, others using it as a reference tool "will be astonished at the scope of the Nazi enterprise" and the collusion of German industry, he said.

The explosion of knowledge followed the end of the Cold War, when scholars could reach into long-hidden sources in Eastern Europe. Some of the increase is explained with the inclusion of smaller camps, which had just a few hundred inmates, and of prisoner-of-war camps which shifted location frequently. Until the encyclopedia project, no one had tried to pull it all together into one comprehensive resource, Megargee said.

"When we dig into the Arolsen files, we'll find that what was for us just a name, just a location, is going to take on some life, because all we've had is some notation somewhere that there was such a place," he said.

More information was disclosed in compensation claims after the Germany government and German industries created a $6.6 billion fund in 2000 to compensate people exploited as wartime slave laborers.

Gunter Saathoff, the director of the German Foundation which administers the fund, said nearly 1.7 million people applied for restitution, including some 8,000 who served as human guinea pigs for Nazi medical experiments. The final payments were being made Dec. 31.

The Washington historians say more than 100 local detention camps were set up in the first months of the Nazi regime in 1933, mainly for political prisoners. By mid-1934 control was centralized under the command of SS chief Heinrich Himmler.

Organized killings began shortly after the war started in late 1939 at so-called "euthanasia sites," where the victims were physically or mentally handicapped people or prisoners no longer capable of work. Estimates say the number reached 200,000.

By 1940, Jews in Poland and Russia were being confined in ghettos. As German men were needed to fight, men and women were brought from Poland, the Netherlands, the Soviet Union and other occupied nations to work in German industries. Labor camps proliferated.

In 1941 the Germans devised the Final Solution to exterminate Europe's Jews. In September, even before the plan was formally approved, the SS began experimenting with gas chambers at Auschwitz, about 40 miles from the Polish city of Krakow.

Auschwitz was the largest of six camps whose primary purpose was to kill Jews at maximum speed. In 1941-42, more death camps were built in Chelmno, Belzec, Sobibor, Treblinka and Majdanek.

By the time Germany capitulated in May 1945 and disbelieving Allied forces marched into the camps, 2.7 million people had been incinerated in the ovens or open pits of these six compounds. Of every three Jews in Europe at the start of the war, two were dead.