" ... Whenever possible, Walters debunks the myth of Wiesenthal, asserting that he was a self-promoting fake and a liar. This is not news. The former head of the Mossad, Isser Harel, claimed after the Eichmann trial that Wiesenthal had no role in Eichmann’s abduction, and in fact had endangered the operation. ... " 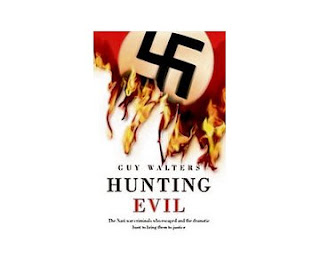 IN MAY 1960, the Mossad, the Israeli secret service, kidnapped Adolf Eichmann from outside his house in Buenos Aires. The Nazi who had masterminded the transportation of millions of Jews to the extermination camps of eastern Europe was smuggled back to Israel, put on trial, convicted of mass murder and hanged on May 31st, 1962. His trial was broadcast live around the world. Eichmann, a small, bony, balding man, sat in a bullet-proof glass booth. His defence was that he had merely been following orders.

The Eichmann trial gave rise to a host of studies that tried to come to terms with how a banal pen-pusher could have been so blithely responsible for the deaths of millions. The affair also made a star out of Simon Wiesenthal, an Austrian Jew, who had dedicated his life to capturing Nazi war criminals and who claimed Eichmann as one of his scalps.

Hunting Evil is a widely researched, occasionally ponderous but ultimately satisfying investigation into the web of interlocking interests that assisted many high-ranking Nazis as the Third Reich collapsed.

Walters deals with how under-equipped the Allies were to capture known war criminals or to process the great numbers of them that had been imprisoned.

“Allies were simply unable to cope . . . to avoid starving their prisoners, hundreds of thousands had to be set free”. Among those who walked was Dr Josef Mengele, Auschwitz’s “Angel of Death”. In many cases, the Allies, for whom communism was the new enemy, employed known ex-Gestapo men with the blood of thousands on their hands to advance Allied interests in eastern Europe. Klaus Barbie, the “Butcher of Lyons”, was enlisted in 1947 by US intelligence.

The extensive role of the Catholic Church in providing assistance to Nazis seeking safe passage through Italy has been well documented before, and Walters lays out in detail the role of Bishop Alois Hudal, head of the Austrian-German seminary in Rome, and that of shadowy Croatian priest Msgr Draganovic, who had impeccable Vatican contacts.

Whenever possible, Walters debunks the myth of Wiesenthal, asserting that he was a self-promoting fake and a liar. This is not news. The former head of the Mossad, Isser Harel, claimed after the Eichmann trial that Wiesenthal had no role in Eichmann’s abduction, and in fact had endangered the operation.

Walters goes into great detail to further deflate Wiesenthal’s reputation, but this part of the book is distracting. The pace steps up when the Mossad hatch their plans to kidnap Eichmann or to assassinate war criminals like Herberts Cukurs, the notorious “Hangman of Riga”.

Walters also deals well with the lives in South America of Mengele, Barbie and other high-ranking Nazis. Barbie’s career was the most extraordinary. Before he was extradited to France to stand trial in 1983, he had been advising the Bolivian government on “interrogation techniques”.

Walter relates how in 1950, before fleeing to South America, Eichmann survived near Hamburg as a chicken farmer. He learned his trade from an old booklet, The Healthy Hen and You, published by the Nazi Farmers’ Organisation.

He later wrote: “By carefully following the instructions . . . I became a successful chicken farmer. That is the secret of success, you see. You must obey instructions.”
----------------------
Peter Cunningham is a novelist. His most recent novel, The Sea and the Silence , is published by New Island