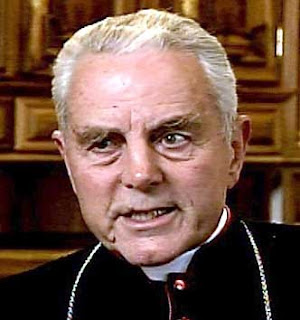 A Swedish television program airing Wednesday claims that top Vatican officials knew that Bishop Richard Williamson was a Holocaust denier when they lifted his excommunication in January, the Associated Press is reporting.

The report comes on the eve of reconciliation talks between the Vatican and the traditionalist Society of St. Pius X, whose leaders were excommunicated in 1988 after they consecrated Williamson and three other priests as bishops in defiance of Pope John Paul II.

Pope Benedict XVI has made a priority of reconciling with the society, whose members seek a return to the church as it was before the Second Vatican Council. But the effort provoked a furor in January when Sweden’s SVT aired an interview taped in November 2008 in which Williamson denied key elements of the Holocaust. The British bishop disputed the commonly cited figure of 6 million Jews killed by the Nazis during World War II, saying the actual number was no more than 300,000, and said none were gassed.

Vatican officials have said they were unaware of Williamson’s beliefs when his excommunication was rescinded in January. But SVT says Catholic officials in Sweden knew of his remarks in the interview in November and made a full report to the apostolic nuncio in Stockholm, the representative of the Vatican in Sweden, who passed the information on to Rome.

“Naturally we passed all the information that we had on to the nuncio,” Bishop Anders Arborelius of Stockholm told SVT, according to the AP. “After that I don’t really know how it moved along.”

In a statement Wednesday, the AP reports, the diocese reiterated that it had sent a report about the interview to the Vatican last November. The SVT program says the nuncio, Archbishop Emil Paul Tscherrig, confirmed off-camera that he had contacted several people in the Vatican, including Cardinal Dario Castrillon Hoyos, who was then leading the effort to reconcile with the Society of St. Pius X.

The report contradicts the statement of Castrillon Hoyos, who told the Italian newspaper Corriere della Sera in January that no one at the Vatican knew of Williamson’s beliefs until after his excommunication had been lifted.

“We absolutely didn’t know anything about this Williamson,” said Castrillon Hoyos, who stepped down as head of the Pontifical Ecclesia Dei Commission in July after reaching the mandatory retirement age of 80. The reconciliation effort is now being led by Cardinal William Levada, the highest-ranking American at the Vatican.

The SVT program does not say that Pope Benedict XVI knew of Williamson’s beliefs. Benedict repudiated Williamson’s remarks, and Cardinal Christoph Schoenborn of Vienna said last week that the Society of St. Pius X must respect Jews and members of other faiths if it is to be reinstated to the church.

Williamson eventually apologized for the “harm and hurt” caused by his remarks. But he did not withdraw them or say that he no longer believed them.