Where have Bill Allen's Sins been Hiding?

Also See: "THE MAN WHO MADE SARAH PALIN" 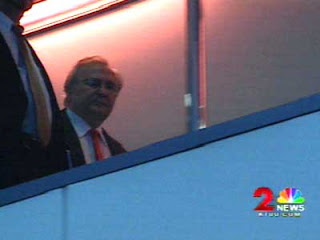 It seems like that there's a long line of people who now want to call Bill Allen a dangerous sleazeball.

Former Sen. Ted Stevens called the longtime VECO CEO a liar at the senator's trial last fall, and Stevens's lawyers painted the tycoon as both brain-addled and determined to shade his testimony to protect his family from prosecution and his fortune from forfeiture. Former Speaker of the House Pete Kott's new lawyer cites evidence that Allen repeatedly had sex with underage girls, sometimes bringing them across state lines for purposes of prostitution. And as waves of embarrassing revelations about government misconduct increasingly wash over the federal investigation into Alaska public corruption, it seems possible that federal officials will point the finger at Allen and his duplicity as the reason prosecution cases have gone awry.

But why is it only now that these people who used to be so close to Bill Allen denounce him as a devil? Why is it that the scales are only now falling from their eyes so that the once-influential magnate stands as the worst person in the world?

Ted Stevens went repeatedly on "boot camp" vacations with Allen, and the last of those just-the-two-of-them get-togethers was five years after Allen suffered his brain injury in a motorcycle accident in 2001. One of Stevens's adult daughters testified in her father's own defense that she found "creepy" the way Allen used the Senator's home in Girdwood. FBI tapes captured how Kott spent many hours with Allen drinking and saying crude and outrageous things in the famous "Animal House" of Suite 604 in Juneau's Baranof Hotel. Kott actually lived at Allen's house for a while, and seemed to consider the multimillionaire businessman a surrogate father.

The Alaska Republican Party relied on Allen to be the party's fundraising powerhouse, and even got out of his way to let the VECO chieftain be the man to see in financing GOP campaigns on the Last Frontier. And federal prosecutors and investigators spent many hundreds of hours with Allen over a period of more than two years before the collapse of the Ted Stevens case over prosecutorial misconduct caused them to start to edge away from their key witness.

A lot of people who now want to distance themselves from Bill Allen had plenty of opportunities over the years to see up close how bad he was -- a man who cut corners as a matter of course, a man whose well-documented active and varied sex life reportedly crossed the line into the illegal over and over.

There are a lot of people in Alaska and Washington, D.C. who need to ask themselves "How did Bill Allen get to be so popular with so many of the powerful for so long? And who let him get that way?"

Witnesses in criminal trials often have warts, but Bill Allen's warts are uglier than most.

The dominant feeling of jurors in criminal trials often is a sense of shock that there could be people who really lived the way the lay witnesses in criminal cases often do. As I told one friend, those witnesses frequently do not resemble the folks at his table at Rotary meetings. One extreme example came when I was a prosecutor: I had one witness in a sexual abuse of a minor case who some years previously had been drinking with two men in a house when one man shot the other to death. She just kept drinking with the killer-in the same room with the dead man's body-for hours until the authorities showed up.

So as a former prosecutor of sex-crime cases I've seen some pretty bad stuff, and I'm also used to witnesses with dents and scratches on them.

Having said all that, the new Motion to Dismiss filed by Kott's new attorney alleges that the federal government apparently sat on -- and even discouraged the Anchorage Police Department from pursuing -- evidence of some unusually sordid crimes committed by Bill Allen. The allegations are gross -- maybe even beyond gross. They include allegations that while in his 60s, the oil services magnate had sex with as many as five underage girls. He allegedly even went to the mother of a 15-year-old girl and asked if he could date her daughter; the mother allegedly agreed and Allen supposedly then began taking care of the mother financially on a long-term basis.

Two points about these allegations, all of which Allen apparently denies: The first is that the charges make him look so evil and depraved that even their airing will tend to hurt him in the eyes of future judges and jurors. This is not good news for a man facing sentencing next month before the same judge who is reading all these allegations in Kott's new pleading.

The other point is a question that is probably in the minds of a number of defense attorneys whose clients face prosecution heavily based on Bill Allen's testimony: When did the federal government first talk about underage sex with Bill Allen, and who brought up the subject?

This story started out looking like it was all-American and particularly all-Alaskan, but now it has elements of a Russian novel as well as multiple Greek tragedies.

Cliff Groh has reported on Alaska's political corruption scandal and covered Ted Stevens' trial at his blog, alaskacorruption.blogspot.com, where this story first appeared. Groh is a lifelong Alaskan and attorney with a private practice in Anchorage. Groh worked as a prosecutor for the Alaska Department of Law, and he has conducted jury trials in Anchorage, Unalaska, St. Paul, Sitka and Sand Point. He has also served as the Special Assistant to the Commissioner of Revenue, where he worked successfully for the revision of oil taxes enacted in 1989 that raised taxes on the Prudhoe Bay and Kuparuk fields. He was the principal legislative staff member when the Permanent Fund Dividend was created. He is conducting research for a book on public corruption in Alaska.