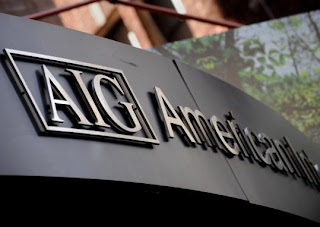 By now you no doubt have heard about the AIG bailout ... There is, however, something you almost certainly haven't heard about which is that the insurance business is heavily involved in covert operations. Some of you may be thinking "Huh? Insurance companies and covert operations?! Wow, this is some real nutballery, even for LATOC". Well if so then just consider the following excerpts from an article entitled "The Secret (Insurance) Agent Men" by Los Angeles Times staff writer Mark Fritz, originally published on September 22nd, 2000. Emphasis is mine:

COLLEGE PARK, Md. They knew which factories to burn, which bridges to blow up, which cargo ships could be sunk in good conscience. They had pothole counts for roads used for invasion and head counts for city blocks marked for incineration.

They weren't just secret agents. They were secret insurance agents. These undercover underwriters gave their World War II spymasters access to a global industry that both bankrolled and, ultimately, helped bring down Adolf Hitler's Third Reich.

Newly declassified U.S. intelligence files tell the remarkable story of the ultra-secret Insurance Intelligence Unit, a component of the Office of Strategic Services, a forerunner of the CIA, and its elite counterintelligence branch X-2.

. . . the unit mined standard insurance records for blueprints of bomb plants, timetables of tide changes and thousands of other details about targets, from a brewery in Bangkok to a candy company in Bergedorf. 'They used insurance information as a weapon of war,' said Greg Bradsher, a historian and National Archives expert on the declassified records.

The men behind the insurance unit were OSS head William "Wild Bill" Donovan and California-born insurance magnate Cornelius V. Starr. Starr had started out selling insurance to Chinese in Shanghai in 1919 and, over the next 50 years, would build what is now American International Group, one of the biggest insurance companies in the world.

Starr sent insurance agents into Asia and Europe even before the bombs stopped falling and built what eventually became AIG, which today has its world headquarters in the same downtown New York building where the tiny OSS unit toiled in the deepest secrecy.

Starr died in 1968, but his empire endures. AIG is the biggest foreign insurance company in Japan. More than a third of its $40 billion in revenue last year came from the Far East theater that Starr helped carpet bomb and liberate. Source

If the insurance business was heavily involved in OSS covert operations during World War II, it is most definitely NOT a leap of logic to suspect that the world's biggest insurer today (AIG) is also heavily involved in them. This is particularly the case when you consider that, as the L.A. Times article explained, the man who ran the OSS's insurance intel unit is the same man who established AIG.

What exactly the insurance related covert operations currently involve I (obviously) don't know. It stands to reason, however, that whatever they do involve, a bankruptcy of the world's biggest insurer would likely be very disruptive to them. In other words, the federal government was probably *extremely* motivated to save AIG for reasons that aren't going to be acknowledged in the mainstream or alternative press.

Hopefully this puts the bailout of AIG in a bit more perspective.