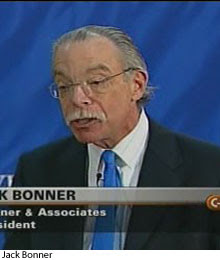 A lobbyist told a House panel today that his firm mishandled its response to forged letters it sent to members of Congress on a climate legislation but maintained that the forgeries were an "anomaly" perpetrated by a temporary employee.

Jack Bonner, chairman of Bonner & Associates, repeatedly told the House Select Committee on Energy Independence and Global Warming that he took "full responsibility" for the forged letters and should have been more proactive in contacting lawmakers once the forgeries were uncovered.

"I am personally very sorry that I immediately did not go to the three members involved, sit in their office and tell somebody exactly what happened," Bonner told Chairman Ed Markey (D-Mass.), who asked Bonner several times why he waited until after the House vote on the global warming bill to reveal the forged letters.

"What this individual did was wrong, and we should have caught him before he perpetrated this scheme," Bonner said.

Bonner worked as a subcontractor for the coal industry advocacy group American Coalition for Clean Coal Electricity, generating letters to lawmakers from community groups that raised concerns about the cost of a proposed cap-and-trade system for curbing greenhouse gas emissions. A dozen of the more than 50 letters sent by Bonner just before the House vote in late June were later identified as forgeries that used the names of community organizations that did not actually sign the letters.

Documents provided to the committee by Bonner reveal that the firm uncovered the forgeries on June 22 and notified Hawthorne, which the informed ACCCE, over the next few days.

But the same documents also show that Bonner did not try to contact members of Congress about the forgeries until July 1 and did not reach two of the three congressional offices -- those of Reps. Tom Perriello (D-Va.) and Kathy Dahlkemper (D-Pa.) -- until July 13. The third office to receive letters -- that of Rep. Chris Carney (D-Pa.) -- was never contacted.

The timing of the letters -- and specifically the notification of congressional offices -- was a major focus during the opening stages of today's hearing. "The coal coalition was willing to pay millions to peddle a point of view, but they were unwilling to spend a few cents to call the U.S. Capitol and clear the air," Markey said. "This point of view was based on scare tactics and misleading figures and had zero to do with educating the public on key issues."

Bonner offered no explanation about why his firm failed to contact members of Congress until after the vote. But he also claimed that he did not know the timing of the House vote nor that the lawmakers who received letters represented swing votes.

Markey expressed skepticism about Bonner's explanations. "You say that you didn't know when the vote was going to occur, but that was as well advertised of legislative activity as could possibly exist," he said.

Bonner went on to say that the group felt its first responsibility was to contact the organizations whose names were used on the forged letters.

Meanwhile, Steve Miller, president and chief executive of ACCCE, told the committee his group had no prior knowledge of the forged letters and was "appalled" by the forgeries. "ACCCE did not play any role in the generation of false letters," Miller said.

Miller later said that it did not reach out to lawmakers sooner to inform them of the forgeries because it believed Bonner was already taking such a step.

"I was convinced that because the Bonner folks had found the letters ... that it was in their personal interest, their company's reputational interest, to address this issue," Miller said.

Miller went on to say that his organization did not oppose the House cap-and-trade bill sponsored by Markey and Democratic Rep. Henry Waxman of California, saying that the group only wanted to see specific changes to legislation. "Our organization has never opposed the Waxman-Markey bill," he said.

Miller also said ACCCE would not pay Bonner for its work on the House bill, nor would it hire the firm again.

Copyright 2009 E&E Publishing. All Rights Reserved. For more news on energy and the environment, visit www.greenwire.com.