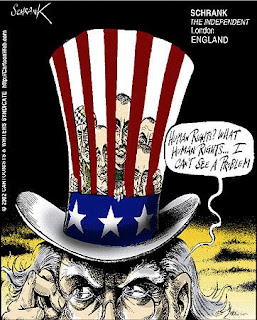 Shortly after 9/11, George W. Bush secretly signed two executive orders. Both violated basic constitutional protections as well as U.S. obligations under international treaties, yet both carried the force of law.

The first order grants the president (and other officials, including the secretary of defense, the secretary of homeland security and presumably certain postal clerks) the right to declare anyone — including an American citizen — an "unlawful enemy combatant." A person so declared has no redress, no way to appeal, no ability to challenge that designation. Once a person has been named an enemy combatant, according to the Bush administration — and now to the Obama administration — he has no rights. He can be held without charges forever, tortured, you name it — well, actually, the president or the secretary of defense names it.

These two documents first came into play on Nov. 3, 2002, when a CIA-operated Predator drone plane violating Yemeni airspace fired a Hellfire missile at a car containing Qaed Salim Sinan al-Harethi, supposedly al-Qaida's No. 1 man in Yemen at the time.

U.S. officials didn't know that an American citizen, Kamal Derwish, was riding along. (You know what they say about hitchhiking.) "The Bush administration said the killing of an American in this fashion was legal … this is legal because the president and his lawyers say so — it's not much more complicated than that," CBS News reported at the time. "I can assure you that no constitutional questions are raised here," said Bush's national security adviser, Condoleezza Rice, after the CIA assassinations. "He's well within the balance of accepted practice and the letter of his constitutional authority."

It's right there in the Constitution between the right to tax and the repeal of Prohibition.

Anyway, Congress tried to clarify matters in the Military Commissions Act of 2006, part of which — the section that eliminated the writ of habeas corpus — got struck down by the U.S. Supreme Court last year. But the rest of the MCA remains in force, including a passage that defines an enemy combatant as anyone who provides "material support" to the "enemy." And who is the enemy? The enemy is anyone the president says it/he/she/they is.

Again, there is no distinction between foreigners and U.S. citizens.

Jose Padilla, the so-called would-be "dirty bomber" held in a Navy brig since 2002, was tried and convicted of such "material support" charges in 2007. (The government couldn't prosecute Padilla for their original dirty bomb charges because they had tortured him so severely that he had been reduced to mental mush.)

Now that times have supposedly changed, it's time to ask: Why hasn't President Barack Obama abrogated Bush's controversial executive orders? If Obama truly seeks a break with the lawlessness of the prior administration, what better way to enact it?

Simply put, no one man — not even a nice, articulate, charismatic one — ought to claim the right to suspend a person's constitutional rights. Not in America. Certainly no one man — not even a young, handsome, likeable one —- should be able to have anyone he wants whacked. Even in dictatorships, the right of life and death is reserved for judges and juries operating under a system purportedly designed to support impartiality and a search for the truth.

But that's not the case here in the United States. In 2002 Scott Silliman, director of the Center on Law, Ethics and National Security at Duke University asked: "Could you put a Hellfire missile into a car in Washington, D.C., under [the Bush] theory? The answer is yes, you could."

Nothing much has changed since then. Obama has eliminated the use of the phrase "enemy combatant," but The New York Times reported that the change is merely meant to "symbolically separate the new administration from Bush detention policies." The words may have changed, but Obama attorney general Eric Holder's definition of who can and cannot be held, said the Times, is "not significantly different from the one used by the Bush administration."

These days, Obama has ramped up the assassination of political opponents of the U.S. and the U.S.-aligned authoritarian regime in Pakistan, deploying more Predator drone plane attacks than Bush. But that's just for now. Obama could still personally order a government agency to murder you.

Which is weird. But not nearly as weird as the fact that you probably don't care enough to do something about it.
------
Ted Rall is the author of "To Afghanistan and Back," the first book about the 2001 invasion of Afghanistan. Among its chapters is one titled "How We Lost the Afghan War."