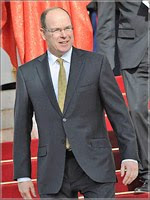 SANTA BARBARA, Calif. (CN) - A man who claims to be Prince Albert of Monaco's former intelligence adviser says the prince owes him money for handling issues that jeopardized the prince's image, including illegitimate children and a rape accusation. Robert Eringer says he spent 8 years investigating people in the prince's social orbit and providing him with information about Russian and Italian organized crime, arms dealers, Freemasons, money left in Monaco by Jews sent to Nazi concentration camps, and a long list of other allegations, and the prince owes him 40,000 euros for it.

Eringer says Prince Albert hired him in 2002 as his intelligence adviser for about 80,000 euros a year, though a formal agreement was never drawn up. He claims he spent the next 8 years investigating the Prince's friends and associates, creating liaisons with intelligence departments of other nations, including the United States, and acting as the prince's "eyes and ears."

Eringer says he traced arms dealers, Russian and Italian money launderers, including Vladimir Putin, and people in direct contact with Saddam Hussein, who were involved in shady oil deals. Eringer says he warned the prince to keep his distance from dubious characters, including the man who was "reputed to be French President Jacques Chirac's secret channel to Saddam Hussein," and the prince initially heeded his warnings because he wanted to rid Monaco of corruption.

Eringer claims he warned the prince about a man who was being considered as Monaco's Consul to Russia, because the man "had been a KGB officer in the 1980s whose specialties were labor unions and disinformation," and because he was "connected to Petro trade, a company in Monaco believed to be laundering Russian money for Putin. (Eringer possesses documents on these matters.)" [Parentheses in original.]

Eringer claims he also negotiated with the mothers of Prince Albert's illegitimate children, and discovered a woman who claimed the Prince had kidnapped and raped her.

According to Eringer's Superior Court complaint: "In August 2004, HSH [His Serene Highness] asked Eringer to assist a young woman resident of Nice, France and [sic] aspiring children's book author and illustrator. Much later, this woman told Eringer that she had been lured to a yacht to meet HSH, who expressed an interest in helping her. This young woman claims that she was kidnapped and raped by HSH on the boat. She has sworn an affidavit, which Eringer possesses."

Eringer says he exposed one of the prince's so-called friends who had a videotape of Prince Albert engaged in a sex act with a young stripper on his 44th birthday. He claims the man was showing the tape at parties around Monaco, saying, "This is what I have on your prince."

Eringer claims he introduced the prince to ranking officials in the CIA and the FSB, the successor to the KGB, and cultivated relationships for the prince with other powerful U.S. and foreign representatives. He claims he worked tirelessly to protect the prince's image in the public eye.

He claims that in a meeting about the prince's "as yet unrecognized illegitimate daughter," the prince asked him, "Could you arrange for her to have an accident?"

Eringer claims the prince stopped responding to him toward the end of 2007 and the beginning of 2008, and never paid him for his final quarter of work. He claims the prince owes him 40,000 euros and has not responded to several requests for payment.

Through the 31-page complaint, Eringer claims he "possesses documents" on his allegations. He demands his paycheck, alleging breach of contract and misrepresentation. He is represented by Brigham Ricks.