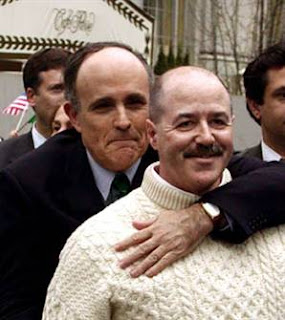 "I fear he has a toxic combination: self-minded focus and arrogance," the White Plains federal judge said.

That combination shows Kerik feels "the end justifies the means" and that "the rulings of the court are inconvenient and are to be ignored," Robinson said.

Kerik was led away by U.S. marshals after removing his belt, tie and shoelaces, standard procedure for all prisoners.

The former top cop likely will be housed in the Metropolitan Corrections Center, which is located right next to One Police Plaza - the NYPD headquarters where Kerik once reigned.

Kerik was out on bail and set to go on trial next week on charges of going to bat for a mob-linked contractor who secretly paid for his apartment renovation.

The bail revocation request came after Robinson earlier warned Kerik to monitor the contents of Web sites affiliated with his defense.

Prosecutors say his supporters were putting up distorted information designed to curry favor with a potential jury pool.

Prosecutors told the judge Monday the pro-Kerik Web campaign was continuing and asked the judge to revoke Kerik's bail.